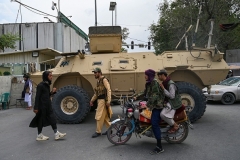 Taliban fighters have set up roadblocks in Kabul, preventing Afghan allies of the U.S. from reaching the airport, press reports said on August 17, 2021. (Photo by WAKIL KOHSAR/AFP via Getty Images)

(CNSNews.com) - When President Joe Biden announced the U.S. troop withdrawal from Afghanistan in April, he said the military mission would continue through the end of August.

"Our military mission in Afghanistan will conclude on August 31st, Biden said again on July 8. "The drawdown is proceeding in a secure and orderly way, prioritizing the safety of our troops as they depart."

But the safe evacuation of tens of thousands of Afghans who helped the U.S., and an untold number of Americans still scattered around the country, is not proceeding in a safe or orderly way. As video from the airport on Monday showed, it's been a mad, desperate scramble by Afghans to get out of the country now that the Taliban has all but taken control.

On Tuesday, a reporter noted that given the chaos surrounding the evacuation effort at Kabul airport -- and the fact that many people can't reach the airport -- President Biden could change his "arbitrary" August 31 deadline, giving desperate Afghans more time to get to the airport or to get Special Immigration Visas through the State Department.

"The president could...extend that deadline into September as long as the aiport is secure, isn't that right?" the reporter asked Pentagon spokesman John Kirby.

"The mission that we've been given, Tom, is to conduct this drawdown by the 31st of August," Kirby replied.

"But if the airport's secure, you could continue into September, couldn't you?" the reporter asked.

"That's a decision that the president, commander-in-chief, would have to make," Kirby said. "Our mission right now, we have to talk about what we're doing now, Tom, and what our focus is. And that's on getting this completed by the 31st of August."

"Our focus is on security and the operation of the airport," Kirby told Tuesday's news conference, and military flights have resumed following Monday's stand-down.

But the Taliban has set up a perimeter outside the Kabul airport, apparently to prevent Afghan allies of the U.S. from reaching the airport.

Asked if the U.S. has some kind of “arrangement” with the Taliban to allow safe passage, Kirby said U.S. commanders at the airport "are in communication with Taliban commanders on the ground outside the airport," and "there is communication between them and us."

“I would just let the results speak for themselves so far,” Kirby said.

Kirby repeated that "there are interactions down at the local level, and...we are processing American citizens to get out…Thus far, and it’s early on, the results are speaking for themselves, and I think that's probably where I'd like to leave it."

Another reporter said estimates of the total number of people trying to get out of Afghanistan is probably around 100,000: "Given that, are you confident with your planning that by the 31st you can get all those people out, or is that uncertain?"

"What we're confident (about) is that we’re going to maximize capacity to the degree that we can," Kirby said.

And that at max capacity, as the general said, given what could be more than two dozen sorties per day, you could get 5,000 to 9,000 people out per day. Our focus is on, again, making sure that the environment, the conditions are set to be able to do that.

As I said the other day, airlift is not going to be a limiting factor but it also is going to require and has required constant liaison with our State Department colleagues who are obviously in charge of administering the Special Immigrant Visa process and the other priority visas that you mentioned.

So we're working hand and glove with them on the manifests. You know, who is being processed, when they're being processed and making sure that they are ready and able to get on flights out of that. So it's a complex interagency effort here, Tom.

What I can tell you, I can't guarantee a certain number by a certain day. I wouldn't do that. As the general rightly said, weather can play a factor – in fact, weather has played a factor today.

So what we think is, at max capacity, 5,000 to 9,000 per day. A couple of dozen sorties, maybe even more, per day, conditions permitting. But it has to be done in close concert with our State Department colleagues, and so we'll do as much as we can for as long as we can.