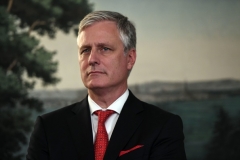 (CNSNews.com) - President Trump's National Security Adviser Robert O'Brien says the United States will maintain control of Syria's oil fields "for a period of time" to make sure ISIS doesn't move back in.

O'Brien echoed President Trump in anticipating that oil "deals" will be made.

"But those oil fields should not fall back in the hands of ISIS. And we want to make sure that the Kurds have some source of oil revenue," O'Brien told NBC's "Meet the Press" on Sunday.

Host Chuck Todd asked O'Brien about the role of the United States in determining who owns or controls Syria's oil fields:

"Look, I think the point the president made is that ISIS controlled these oil fields, and ISIS was deriving great income from the oil fields," O'Brien said.

We took, together with the Kurds, took control of the oil fields. We are going to stay in control of those oil fields for a period of time to make sure that they don't fall back into ISIS's hands. And those oil fields have been providing income for the Kurds to pay for schools, for hospitals, for the SDF (Syrian Democratic Forces) and that sort of thing.

O'Brien said it remains to be determined how much oil the Kurds will get:

"We'll have to work that out," he said. "As the president said, there are going to be deals that are made. But those oil fields should not fall back in the hands of ISIS. And we want to make sure that the Kurds have some source of oil revenue."

Todd asked O'Brien, "So where do we get the right to determine who controls these oil fields?"

"Well, the Kurds are there, right?" O'Brien responded. "And we have forces there that are working with the Kurds, and we're in control of those oil fields now, so we'll have to see what happens. I think the president said that's something we're looking into.

"But right now we're going to stay in control of them to make sure that ISIS doesn't get them. And I want to go back and focus on what happened. I mean, this leader al-Baghdadi was the most vicious, cruel man..."