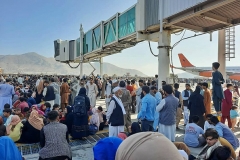 Afghans crowd at the tarmac at the Kabul airport on August 16, 2021, desperate to flee the country as the Taliban takes control. (Photo by AFP via Getty Images)

(CNSNews.com) - White House spokeswoman Jen Psaki said on Wednesday at least 11,000 Americans are still in Afghanistan, as the U.S. military scrambles to airlift them, along with untold thousands of Afghan nationals, out of the country.

I have heard as many as 40,000 Americans. And the Taliban, good fighters, I will tell you, they're good fighters. We have to give them credit for that. They have been fighting for 1,000 years. That's what they do, is they fight.

The Taliban has circled the airport. And who knows if they're going to treat us right. You know, all of a sudden, they will say, well, frankly, if they were smart, they'd really -- and they are smart, and they are smart -- they should let the Americans out.

But we've had situations where you have two or three or four hostages. We could have 40,000 Americans, not to mention others, like people that helped us in Afghanistan. So, we have never had a situation like this. We have 40,000 potential hostages, a minimum of 11,000.

Hannity noted that the U.S. doesn't know how many Americans are "trapped behind enemy lines."

My office has been in direct contact with hundreds of these people who have not heard from the State Department, who cannot get to the airport in Kabul because the Taliban have checkpoints all over the roads and control all access to it.

And Joe Biden's administration won't even commit to stay in Afghanistan to secure that airport for two more weeks to get all those Americans out. And we're really now at the mercy of how long the Taliban is willing to grant safe passage to American citizens.

This is a fiasco. It has grave, grave threats for our future if there's a massive hostage crisis, and it really reveals Joe Biden's impotence and incompetence to the whole world.

Trump emphasized that his May 1 troop withdrawal agreement, which he negotiated with a Taliban leader, was "conditions-based."

"Yes, we had a great deal," Trump told Hannity:

I spoke on numerous occasions to the head of the Taliban. And we had a very strong conversation. I told him up front, I said: "Look, before we start, let me just tell you right now that if anything bad happens to Americans or anybody else, or if you ever come over to our land, we will hit you with a force that no country has ever been hit with before, a force so great that you won't even believe it. And your village, and we know where it is" -- and I named it -- "will be the first one." The first bombs will be dropped right there.

Trump told Hannity he had that conversation with Mullah Baradar, "who is probably the top person."

"We talked for a while after that. That was the primary point I was making," Trump said. "And he understood it. And I asked him: 'Do you understand?' He said: 'Yes, I do understand.' And I wanted them to get a deal done with the Afghan government."

Trump said he "never had a lot of confidence, frankly," in Afghan President Ashraf Ghani, whom he described as a "total crook."

"But I had a very, very strong talk with the Taliban, which I considered to be much more important in this sense, because they were the problem."

Trump said his goal was to withdraw U.S. troops from Afghanistan by May 1, but the Taliban "violated the agreement."

"And, frankly, Biden didn't have to even go by that agreement," Trump said.

Trump noted that he reduced the U.S. troop presence in Afghanistan to 2,500 soldiers: "And they were doing a good job. It was fine. It was a smaller force...But we have the military there."

Trump said unlike Biden, he would have taken the U.S. military out of Afghanistan last, not first:

The Americans come out first. But we're also going to help people that helped us. And we have to be very careful with the vetting, because you have some rough people in there. But we're going to help those people.

But here's -- just to finish, the people come out first. Then I was going to take all of the military equipment. We have billions and billions of dollars' worth of new Black Hawk helicopters, brand-new, that Russia now will be examining, and so will China, and so will everybody else to figure out, because it's the greatest in the world.

We have brand new army tanks and all sorts of equipment, missiles. We have everything. I was going to take it out because I knew they weren't going to fight.

Just one thing, and I have to say, and this is different from everyone else, I said, why are they fighting? Why are these Afghan soldiers fighting against the Taliban? And I was told some very bad information by a lot of different people. The fact is, they are among the highest-paid soldiers in the world.

They were doing it for a paycheck, because once we stopped, once we left, they stopped fighting. So all of the people that talk about the bravery and everything, I say everybody is brave. But the fact is, our country was paying the Afghan soldiers a fortune.

So we were sort of bribing them to fight. And that's not what it's all about. It's a great thing that we are getting out. But nobody has ever handled a withdrawal worse than Joe Biden. This is the greatest embarrassment, I believe, in the history of our country.