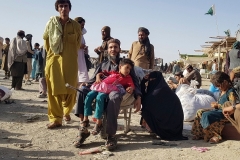 Stranded Afghans wait for the reopening of the Pakistan-Afghanistan border crossing point which was closed on August 12, 2021, after the Taliban took control of the Afghan border town in a rapid offensive across the country. (Photo by STRINGER/AFP via Getty Images)

(CNSNews.com) - The State Department on Wednesday announced that President Biden plans to host a "summit for democracy" later this year, to emphasize how democracy and human rights guide U.S. foreign policy.

"The summit for democracy reflects President Biden’s deeply held belief that in order to tackle the world’s most pressing challenges, democracies must come together, learn together, stand together, and act together," State Department spokesman Ned Price told a press briefing.

That led to a question about the Taliban takeover of Afghanistan, which proceeds apace, given President Biden's withdrawal of U.S. troops.

Matt Lee, a reporter for the Associated Press, asked Price: "How does the administration expect to be taken seriously in terms of promoting human rights and democracy as being at the center of U.S. foreign policy if it is prepared to allow Afghanistan to deteriorate...if you’re prepared to allow that to happen?"

"I would reject every single premise of that question," Price said.

"Really?" the reporter shot back. "Because most of what I just said is actual – is factual."

The United States – I think it is undeniable – has, over the course of 20 years, done more to support the cause of the Afghan people, to provide humanitarian support. Just numerically speaking, of course, we are the largest donor, and that includes humanitarian assistance, it includes assistance for the women and girls of Afghanistan, for Afghanistan’s minorities. That won’t change.

I would also reject the premise that we are just prepared to watch and do nothing as the violence escalates. That could not be farther from the truth. The truth, Matt, is that on every count, on every score, the United States over the course of the past 20 years and now going forward is, I would dare say, doing more than any country to try to bring stability, security, and ultimately, prosperity, to the people of Afghanistan.

Now, it is true that our tactics are changing, that the President has made the decision to withdraw our military forces. That says nothing about our support for the rights of the people of Afghanistan and what we will continue – what we have done and will continue to strive to do -- to bring stability and security to the people of Afghanistan right now, as we speak, through a diplomatic process. And I know you tend to discount diplomacy, at least in this case.

Lee questioned how the State Department can realistically believe that diplomacy is going to accomplish anything, since it hasn't in the past. "And you say you reject the premise that you’re prepared to sit by and watch and do nothing. Well, what have you done over the course of the last couple weeks as these atrocities that you’ve talked about have mounted, as the Taliban has taken over more and more territory? What exactly has it been that you have done?" the reporter asked. "You said that you weren’t going to sit – stand – sit back and do nothing."

"Happy to reiterate much of what we’ve done," Price said:

We’ve spoken of our humanitarian assistance, which is directly relevant to the current and future conditions of the Afghan people, including its women and girls and Afghanistan’s minorities as well, just right now, just this week. And again, this is diplomacy, what we think has the potential to lead to a political settlement and a ceasefire. It is ongoing actively right now.

There are several rounds of planned meetings this week," Price said, referring to ongoing "peace talks" in Doha, Qatar. "The first took place yesterday. There was another one today. There will be another one tomorrow, bringing together representatives from countries in the region and well beyond as well as from multilateral institutions...in Doha – to press for a reduction of violence and a ceasefire and a commitment on the part of all those in attendance -- this constellation of representatives from various countries and international organizations -- not to work with any entity that takes the country by force.

And so just today, Ambassador Khalilzad (the State Department's special envoy) and his team participated in a meeting of the extended troika, that is to say the United States, Russia, China, and Pakistan. There, the countries aligned efforts to press the Taliban to reduce violence, to engage seriously and urgently in Afghan peace negotiations, including the fundamental issues needed to resolve that conflict.

I said this started yesterday. Yesterday, Ambassador Khalilzad and his team participated in a meeting on the current situation, including the current levels of violence, with the UN Envoy Jean Arnault and representatives from the region and other international stakeholders. Tomorrow, there will be a broader set of countries we expect that will be – that will come together.

And in all of this, it’s our intention to forge consensus and to have the international community, including countries in the region and beyond, to speak with one voice. Both sets of these meetings this week included briefings from both the Islamic Republic – that’s the Afghan Government; and from the Taliban negotiating teams. Abdullah Abdullah, the chairman, is there representing the Afghan Government; Mullah Baradar is there representing the Taliban. This is high-level representation.

Price said Ambassador Zalmay Khalilzad, the State Department's special representative for Afghanistan reconciliation, would be meeting with each negotiating team separately "to encourage them to engage productively in this process and, importantly, not to squander this opportunity, which may be an historic opportunity to end what is not--"

"Wait!" Lee interrupted. "Squander this -- what opportunity? What are you talking here about? The opportunity that was brought about by you guys withdrawing, which has plunged the country – 65 percent of the country into chaos?"

Price said he was talking about "the opportunity of the Afghan government and the Taliban and the rest of the world, at least a large swath of the world, coming together.”

And let me remind you, it’s been less than a year since both the Afghan Government and the Taliban have been willing to talk, have been engaged in intra-Afghan dialogue. So we have an opportunity – we’ve had an -- have had an opportunity in recent weeks and months that, in many ways, Afghanistan has not had over the course of 40 years.

We talk about the past three weeks of violence, the past three months of violence. This has been 40 years of conflict. And so with the Taliban and the Afghan Government now willing to talk to one another, of course, that is a necessary but insufficient step.

But what we are doing is galvanizing the international community, supporting these intra-Afghan discussions to attempt to make progress to do a couple of things: to stop this military offensive, diminish the level of violence, and, more broadly, to negotiate a political settlement to form an inclusive Afghan government that ends this conflict. 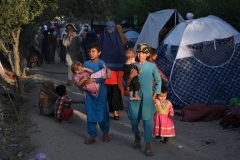 Internally displaced Afghan families, who fled from Kunduz, Takhar and Baghlan provinces due to battles between Taliban and Afghan security forces, walk past their temporary tents at Sara-e-Shamali in Kabul on August 11, 2021. (Photo by WAKIL KOHSAR/AFP via Getty Images)

Lee responded: "I think a lot of people would argue that there’s not been any progress. It’s not been slow; it’s been nonexistent."

Price repeated on Wednesday that those four elements of the peace agreement are "linked" and "interrelated," although "all recent indications...suggest the Taliban are instead pursing a battlefield victory."

"Attacking – attacking provincial capitals and targeting civilians is inconsistent with the spirit of the agreement," Price admitted.

In response to another reporter who asked if the Taliban is taking over the country, Price said the violence erupting across the country is "of grave concern."

It's of grave concern to us. I think we will hear and have heard in Doha that it is of grave concern to the international community. But at the same time, this is not a foregone conclusion, as many people seem to think, that this will be an inexorable march forward for the Taliban or any other force. And we’ve made this point in several different ways.

It is not – it is quite relevant to what we are seeing now that the Afghan National Security Forces are numerically far superior to the Taliban, what the Taliban can muster. As I said yesterday, they have over 300,000 troops, an air force, special forces, heavy equipment, including heavy equipment that the United States only recently provided.

So again, the Government in Afghanistan has tools at its disposal, has political support, continues to receive support from the United States to its security sector, and has the wherewithal, certainly on paper, to defend its country.

Right now what we see is an issue of leadership. It’s both political and military leadership. We need to see Afghans’ leaders united. We need to see a united front, knowing that they and their forces are fighting for a just cause. They have a credible strategic plan. They have the right tactics, the right execution. The advances we have seen need not continue.

First, the levels of violence – again, unacceptably high. The atrocities that have been reported are repugnant. This is evidence of a force that appears to have no respect for their fellow countrymen and women. It is – these are the tactics of a force that, if that continues, obviously will not have legitimacy on the part of the international community and, importantly, won’t accrue the sort of international assistance that any future government in Afghanistan will need to achieve any semblance of durability.

And as I was saying before, it is in no one’s interests – not the Taliban’s interest – to attempt to seize power only to control parts of a country that are riven by conflict, where their hold on power is always in jeopardy.

What we are seeking, what we are supporting, is a political settlement, is a diplomatic solution to this that, in the first instance, is Afghan-owned and Afghan-led but ultimately can lead to a diminution of the violence, a ceasefire, and a durable political outcome going forward.

McConnell: Biden Must Explain Why He Thinks ‘Retreating in the Face of the Taliban Will Make America Safer’