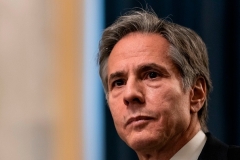 Antony J. Blinken speaks during his confirmation hearing to be Secretary of State before the US Senate Foreign Relations Committee on January 19, 2021. (Photo by ALEX EDELMAN/POOL/AFP via Getty Images)

(CNSNews.com) - "What would you tell the people in the caravan coming toward America?" Sen. Lindsey Graham (R-S.C.) asked Secretary of State nominee Antony Blinken at his confirmation hearing on Tuesday.

"I would say, do not come," Blinken responded.

In response to another question, Blinken said he has "issues" with the Trump administration's requirement that asylum-seekers remain in Mexico until their claims can be adjudicated in the United States.

"I think that we need to make sure that we are approaching what we do when it comes to those seeking asylum, seeking protection in this country, in line with the finest traditions that this country has shown from generation to generation," Blinken said.

Part of that is the ability that is both, I believe, a legal one and--and a moral one, from where I sit, to allow people to make asylum claims and to deal with those claims expeditiously.

People who need protection should get it. Those who do not meet the criteria should, with dignity, be removed. Part--but our problem is that we're not resourced adequately to do this. And that's what we need to work on.

Blinken called for a humane, a fair, and an orderly system" that is able to "adjudicate asylum claims on the spot."

Asked if he agrees that the U.S. should decriminalize entry into the country, Blinken said that issue is outside his jurisdiction, "but I disagree."

Sen. Jeff Merkley (D-Ore.) noted that Joe Biden supports a "significant economic package" for Northern Triangle countries -- U.S. taxpayer money intended to spur the kind of development that would deter people from coming to the U.S.

"Can we deliver such economic help without, in essence, strengthening or feeding corruption in those countries?" Merkley asked Blinken.

"The short answer, Senator, is I think that we can," Blinken said, "but I don't want to minimize the difficulty. When we did the initial package during the Obama-Biden administration...the vast bulk of the assistance did not go through or to the governments in question.

"It went typically through third parties, and it was tied very explicitly to concrete reforms on the part of these countries in criminal justice and policing, in combating corruption, in creating economic opportunity, etc., dealing with all the drivers of--of migration."

"Now, we have what is admittedly an ambitious plan to--to pursue this, but to do it in a way that doesn't send money...not tied to concrete reforms."