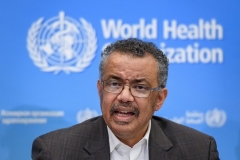 World Health Organization (WHO) Director-General Tedros Adhanom Ghebreyesus speaks following a WHO Emergency committee meeting to discuss whether the Coronavirus outbreak that began in China constitutes an international health emergency, on January 30, 2020 in Geneva. (Photo by FABRICE COFFRINI/AFP via Getty Images)

(CNSNews.com) - The World Health Assembly, the decision-making body of the World Health Organization, plans to "strengthen" its preparedness for and response to pandemics and other health emergencies when it meets in Geneva May 22-28.

"The alarming amendments offered by the Biden Administration to the WHO’s International Health Regulations would grant new unilateral authority to Director-General Tedros Adhanom Ghebreyesus to declare a public health crisis in the United States or other sovereign nations, without any consultation with the U.S. or any other WHO member," Smith warned.

Specifically, Smith said, the Biden Amendments would strike the current regulation that requires the WHO to “consult with and attempt to obtain verification” from a country experiencing a health emergency.

That would undermine the U.S. ability to "declare and respond to an infectious disease outbreak within the United States," making such a declaration "dependent on the judgment of a corrupt and complicit UN bureaucracy," he said.

"Now more than ever, our constitutional system of American government must be protected from those seeking to override the voice of the people and consent of the governed in favor of dictates by an agenda-driven global administrative bureaucracy."

On his first day in office, President Biden signed an executive order reversing President Trump's decision to withdraw from the World Health Organization. "The Biden-Harris Administration will work with the WHO and our partners to strengthen and reform the organization, support the COVID-19 health and humanitarian response, and advance global health and health security," the White House said at the time.

WHO's International Health Regulations legally bind its 196 signatories to "detect, assess, notify and report" to WHO, within 24 hours, "all events which may constitute a public health emergency of international concern within its territory...as well as any health measure implemented in response to those events."

The amendments proposed by the Biden administration say if a nation does not notify WHO of a health emergency within its borders, "WHO may take into account reports from (other) sources...and shall assess these reports according to established epidemiological principles and then communicate information on the event" to the country that failed to report the problem."

The current policy says before taking any action based on reports of a possible disease outbreak, “WHO shall consult with and attempt to obtain verification from the State Party in whose territory the event is allegedly occurring."  But that sentence is struck out. Instead, WHO "shall" make the information it has received through reports available to other nations.

If a country with a health emergency does not accept an offer to collaborate with WHO within 48 hours, "WHO shall [the word ‘may’ is crossed out], when justified by the magnitude of the public health risk, immediately share with other States Parties the information available to it, whilst encouraging the State Party to accept the offer of collaboration."

The Biden administration clearly had China in mind when it submitted the proposed amendments. China was slow to notify the world of the COVID outbreak and it has failed to cooperate with investigators trying to determining the origins of the pandemic.

But Smith says the Biden amendments would allow the WHO to the determination of public health emergencies in the U.S. as well as China.

"There are regulations with W.H.O. that go back to 2005," Smith told Fox News's Laura Ingraham on Thursday night:

“And they equally gave nation-states, like the United States, the ability to collaborate and not (give the WHO) a unilateral power.

“Well, under this Biden regulation, and I have it right here -- a series of amendments begins on May 22nd, at the World Health Assembly…they will get rid of that. They strike lines through the language where the states -- the countries -- have to agree.

“They also...when it comes to the issue of enforcement -- what are we going to do in response -- if a country like the United States says we don't think we have this health emergency you're saying (we have) -- we have 48 hours to give an accounting to the World Health Organization."

Smith said WHO Director-General Tedros, who gains more power under the Biden amendments, cannot be trusted.

“He got his job from Xi Jinping -- the Chinese Communist Party put him in that position of being director general. They lobbied, thy provided a lot of money for the effort, and so when COVID hit, he dutifully put out false information...We still don't have the W.H.O. coming clean on the (COVID) origins.”