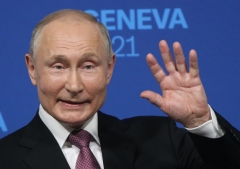 (CNSNews.com) - Former Director of National Intelligence John Ratcliffe calls it "bizarre" and "absurd" that President Joe Biden gave Russian President Vladimir Putin a list of 16 critical infrastructure items in the U.S. that must be off limits to cyber extortionists.

"To hand him that kind of list is essentially to hand him a target list, to give your adversary -- 'whatever you do, don't attack these. These are where we're most vulnerable, so stay away from that.'

"I mean, that's how Vladimir Putin would look at that. I don't know who's coming up with the strategies. But if you're going to give Vladimir Putin a list, it should have been a list of our targets.

It should have been, hey, if we suffer another major cyberattack, we're coming after one of these, or, even better, shut down the lights in the Kremlin before you go to the summit, so that Vladimir Putin knows you mean business and that when you say, don't cross these red lines, or there will be consequences, he knows that you're serious about that."

As for the summit meeting in Geneva, Ratcliffe said Putin "got exactly what he wanted."

You have to remember, Maria, he had a pretty good year. I could make an argument that the first five months of the Biden administration have been the best of Vladimir Putin's political life.

And, of course, Joe Biden responded by giving Vladimir Putin the one thing that he wanted most, which was the Nord Stream II pipeline, the ability to finish that, and, by doing so, to control the flow of energy into Western Europe.

So it had already been a great year for Vladimir Putin before he ever got to Geneva. But then Joe Biden gave him a political win. He invited the Russian dictator who governs a country with an economy -- a small, dwindling economy the size of the state of Texas -- to sit down with him.

Putin not only scored economic and political points -- he also "got a strategic win" by meeting with Biden, Ratcliffe said:

He -- Vladimir Putin got something that the American people haven't gotten. He's had for hours with Joe Biden and an ability to conduct really a physical and mental assessment, evaluation and differential diagnosis.

And why that's important, Maria, as intelligence professionals, when it comes to foreign leaders, whether it's videos or pictures, I mean, we look at every tick, every tremor, every bobble. Is his hand shaking. Is that a spot on his neck? Did he just slur his words?

Because that's important. You want to know the abilities or capabilities or limitations of foreign leaders. And, in this case, Vladimir Putin, as you said, a former KGB spy, a seasoned intelligence officer, had four hours directly with Joe Biden -- Joe Biden, someone who we all know fell up a flight of stairs for no apparent reason twice, someone who couldn't remember the name of his own secretary of defense, couldn't remember the name of the Pentagon, and someone who has uttered more incomprehensible words and sentences than any American would care to admit.

The other thing that he would have had an advantage in that four-hour period is to determine whether or not Joe Biden runs his staff or Joe Biden's staff runs him.

So, as you know, Maria, for good or for bad, Donald Trump ran his staff. He never said, I'm only going to call on reporters that they let me, or my staff gets upset when I call on reporters. That never happened.

That's been a question about Joe Biden. And Vladimir Putin would have been able to observe the interactions with staff, because, if Joe Biden's not making decisions, Vladimir Putin and the Russian intelligence service wants to know how those decisions are being made. So, again, another really valuable takeaway from Vladimir Putin.