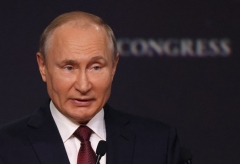 (CNSNews.com) - Speaking to NBC News through an interpreter, Russian President Vladimir Putin said he does not believe China is a threat to Russia, and he said Russia cherishes its relationship with its large and powerful neighbor.

The interview took place in Moscow, a few days ahead of President Joe Biden's scheduled Wednesday meeting with Putin in Geneva, Switzerland.

Putin said China is a "friendly nation," whereas the United States has declared Russia the enemy:

"The first thing I want to say is that over the last few years, the last few decades, we have developed a strategic partnership, relationship between Russia and China that previously had not been achieved in the history of our two nations, a high level of trust and cooperation and in all areas, politics, the economy, in technology and in the area of military and technical cooperation.

"We do not believe that China is a threat to us. That's one. China is a friendly nation. It has not declared us an enemy as the United States has done."

Putin also noted that China is a "huge, powerful country," with an economy larger than that of the United States.

"China has been developing, and I understand that what's beginning to happen is a certain, well, certain kind of confrontation with China. Everybody understands it. We can see it. Why hide from this or be scared by these issues? However, we're not alarmed by it, including, among other things, the fact that our defense sufficiency is at a very high level, including because of this. But the most important thing is the nature and level of our relationship with China."

Putin brushed aside concerns that China is working on its fourth aircraft carrier:

"You said China will have four aircraft carriers," Putin told NBC's Kier Simmons. "How many does the United States have?"

"There you go," Putin said. "That's my point. Why would we worry about the Chinese aircraft carriers on top of everything else? We have a vast border with border, but it's a land border.

"What, do you think the Chinese aircraft carriers will be sent to cross our land border into our territory? This is just a meaningless conversation."

"The level both in terms of the amount of ammunition and warheads and delivery vehicles, the United States and Russia are far, far ahead of China. And the Chinese justly ask, why would we make (nuclear) reductions if we are already far behind what you have? Or do you want us to freeze our level of nuclear deterrents? Why should we freeze? Why we, a country, with a billion and a half population, cannot at least set the goal of achieving your levels?

"These are all debatable issues that require thorough consideration. But making us responsible for China's position is just comical."

Kier Simmons reminded Putin that China does not always support Russian interests, when it comes to Crimea and sanctions, for example:

"You know, we are neighboring countries," Putin said. "One does not choose one's neighbors. We are pleased with the level of our relationship, which, as I said, is unprecedentedly high, as it has evolved over the last few decades, and we cherish it just like our Chinese friends cherish it, which we can see.

"Why are you trying to drag us into some kind of issues that you evaluate as you see fit for building your relationship with China? I will tell you completely honestly -- can I be completely honest? We can see attempts as destroying the relationship between Russia and China. We can see that those attempts are being made in practical policies. And your questions, too, have to do with that. I have set forth my position for you."

Biden on Sunday agreed with Putin that relations between their two countries are at a "low point."

And Biden admitted that U.S. sanctions are not guaranteed to change Russia's behavior:

Autocrats have enormous power and they don’t have to answer to a public.  And the fact is that it may very well be, if I respond in kind — which I will — that it doesn’t dissuade him and he wants to keep going.

And so, there’s a lot going on where we can work together with Russia. For example, in Libya, we should be opening up the passes to be able to go through and provide — provide food assistance and economic — I mean, vital assistance to a population that’s in real trouble.

I think I’m going to try very much — hard to — it is — and, by the way, there’s places where — I shouldn’t be starting off on negotiating in public here. But let me say it this way: Russia has engaged in activities which are — we believe are contrary to international norms, but they have also bitten off some real problems they’re going to have trouble chewing on.

And, for example, the rebuilding of — of Syria, of Libya, of — you know, this is — they’re there. And as long as they’re there without the ability to bring about some order in the — in the region, and you can’t do that very well without providing for the basic economic needs of people.

So I’m hopeful that we can find an accommodation that –where we can save the lives of people in — for example, in — in Libya, that — consistent with the interest of — maybe for different reasons — but reached it for the same reason — the same result.

A reporter asked Biden, "But why do you think he (Putin) hasn’t changed his behavior in spite of everything the U.S. has done to this point?"

Biden laughed: "He’s Vladimir Putin. I’m not going to get into much more than that, because I’ve got to sit down with him. And I’ll be happy to talk to you after that."