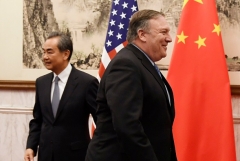 On Thursday night, Secretary of State Mike Pompeo gave a few hints, including a plan to expel Chinese students who come here to spy on behalf of China's Communist Party.

"We're taking seriously the threat that students that come here who have connections deeply to the Chinese State they shouldn't be here at our schools, spying," Pompeo told Fox News's Laura Ingraham:

As a former CIA director, I take seriously the threat of espionage inside of our country. We know we have this challenge. President trump I'm confident, is going to take that on.  I don't want to get in front of what he's going to say tomorrow.

But the American people should know that the Chinese communist party has worked to have enormous influence here in the United States. This isn't a red scare, this isn't racist, the Chinese people are great people.

This is like the days of Soviet Union; this is a communist tyrannical regime that poses real risk to the United States and we have in obligation and duty to make sure the students who are coming here to study, to take the benefits of coming to America to learn and to benefit from what we can provide to them aren't acting on behalf of the Chinese Communist Party.

"We are not happy with China," President Trump said again on Thursday. "All over the world, people are suffering--186 countries," he said, referring to the coronavirus pandemic that started in China without warning to the rest of the world.

China also is making moves to squelch Hong Kong's autonomy by imposing a national security law that would effectively end the "one country, two systems" framework.

Trump on Thursday did not answer a question about whether the U.S. would remain in the trade deal with China.

In his conversation with Ingraham, Pompeo stated that President Trump "is the first president...to recognize the threat that the Chinese communist party presented to the United States of America. "

"They were stealing intellectual property from us, they were moving in the South China sea, and all the things that you know. And presidents before (he mentioned Bush and Obama) just turned their head and wouldn't do it."

Ingraham asked Pompeo, "Do you think China would prefer, all things considered, for Biden to win in November?"

"I can tell you this, the president's going to make sure we protect the American people from the threats that the Chinese Communist Party presents to the United States. I saw none of that during the Obama-Biden years," Pompeo said.