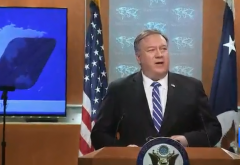 (CNSNews.com) - China knew it had an emerging health crisis on its hands; it could have prevented the deaths of hundreds of thousands of people worldwide; it could have spared the world an economic crisis.

"They had a choice," Secretary of State Mike Pompeo told a news conference on Wednesday:

But instead – instead -- China covered up the outbreak in Wuhan. Its national health commission ordered virus samples destroyed on January 3. China 'disappeared' brave Chinese citizens who raised alarms and deployed its propaganda organs to denounce those who politely called for simple transparency.

And that brings us to today -- 120 days on. China is still refusing the share the information we need to keep people safe, such as viral isolates, clinical specimens, ad details about the many COVID 19 patients in Dec. 2019, not to mention patient zero.

Pompeo said this is not about politics, bullying or blame: "It's about the ongoing need to save American lives."

Pompeo said the United States still doesn't have the samples it needs to develop treatments and vaccines. “This is an ongoing threat – today,” he said.

"They continue to be opaque. They continue to deny access for this important information that our researchers our epidemiologists need. And importantly, this could happen again,” he warned.

"We need countries to share reliable data, in a timely way -- now. And the next time a calamity like this hits.”

Pompeo said he's "heartened" to see that free countries are beginning to realize the risk of doing business with China, whose communist leaders don't care about democratic values or other countries’ economic interests.

Several times, Pompeo said there is no inconsistency in the Trump administration about precisely where the virus originated.

A reporter noted that Pompeo previously has said we don't know if the virus came from a lab in Wuhan, but on Sunday he said there's "enormous evidence" the virus did come from the lab.

“Those statements are both true. They're entirely consistent,” Pompeo said:

We don't have certainty. And there is significant evidence that this came from the laboratory. Those statements can both be true. I’ve made them both. And administration officials have made them -- they’re all true.