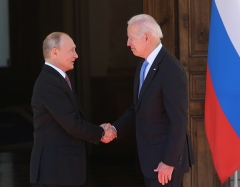 The two leaders met Wednesday in Geneva for meetings that are ongoing at this writing. They shook hands outside the building, then sat for a photo op that seemed awkward for both (grim) men.

Pompeo said he hopes that the Biden administration is prepared to do what President Trump did -- which is to "hold Russia accountable for its malign activity and to make clear there were red lines."

Pompeo already has one criticism of the summit, even before it ends, and that is the refusal of President Biden to hold a joint press conference with Putin following their meeting:

"The fact that you're not prepared to stand six or eight feet from your adversary and tell the world what it is you talked about, the things you care about, why you care about them shows enormous weakness," Pompeo told Fox News Network's Sean Hannity Tuesday night:

And, Sean, we shouldn't forget -- whether it's Chairman Kim or the ayatollah or Xi Jinping, they're watching this too. When they smell weakness, when they can sniff it, the deterrence model that American successful defense depends upon will walk away and these folks will drive a truck through it.

So if you're not prepared to simply stand on a podium and respond to questions from the press that might be asked of you, that might be hard or might be tricky, while your adversary is standing a few feet away from you, that's an enormous sign of weakness.