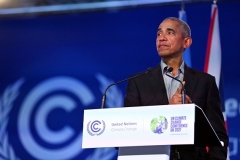 Speaking at the event in person, which means he burned fuel to fly there, Obama dedicated much of his speech to young people, urging them to make true believers of their elders and "to vote the issue -- vote like your life depends on it, because it does."

Obama told the gathering that "the most important energy in this movement is coming from young people," because "they have more at stake in this fight than anybody else."

"And that's why my message to young people begins with acknowledging, you are right to be frustrated. Folks in my generation have not done enough to deal with a cataclysmic problem that you now stand to inherit."

Obama acknowledged the "real anxiety and real anger" that younger people feel towared "older people" who "act like the problem doesn't exist or refuse to make the hard decisions necessary to address it." And he said if "older folks won't listen, they need to get out of the way."

In addition to voting for climate change activists, Obama urged young people to pressure companies "to do the right thing," by avoiding companies "that are actually making climate change worse. I see this in terms of my own daughters -- in which companies they support and which products they buy. Not only are they sophisticated consumers, they're active," he said.

While you're at it, you need to help educate your parents and grandparents, your uncles and aunts, your teachers, your employers, because while a dangerously warming climate is a reality that a lot of -- you have grown up with as young people, you've studied in school, you've read about it, it's been part of the backdrop of your childhood, members of the older generation don't have that same frame of reference.

They do love you, though. They do care about you. They listen to you more than you think. And if you explain how important the issue is to you, you may lead them to rethink their position or at least be more open minded. In fact, I'm pretty sure they'll listen to you in a way they might never listen to a politician or some expert on TV or a former president. That's power you have. You have to use it.

And to change the minds of those fellow citizens in our respective countries, we have to do a little more listening. We can't just yell at them or say they're ignorant. We can't just tweet at them. It's not enough to inconvenience them through blocking traffic in a protest. We actually have to listen to their objections and understand the reluctance of some ordinary people to see their countries move too fast on climate change. We have to understand their realities and work with them so that serious action on climate change doesn't adversely impact them.

Obama pointed to "the guy who has to drive to his factory job every single day, can't afford a Tesla, and might not be able to pay the rent or feed his family if gas prices go up. We have to think about the mother in India who, yes, will suffer droughts and floods made worse by climate change, but whose more immediate concern is getting electricity so her children don't have to sit in dark every night and can't do their homework."

Obama said moving from dirty energy to clean energy "does have a cost."

"That's why, when it comes to climate change, a country like the U.S. does have to do more than a country like Mali or Bangladesh. It's also why we need to make sure the people most affected by the transition to clean energy aren't the ones bearing most of the cost. They don't have any margin for error."

Then he used a personal example:

"I can afford to give up a lot of my current lifestyle to benefit the planet because I'll still have a lot left over. A lot of folks don't have that cushion. So that means that any climate plan worth its salt has to take these inequities into account, whether it's through subsidies to poor people to ease the transition to clean energy, whether it's technology transfers that help poor countries meet their development goals by leap-frogging dirty fuels, we have to pay attention to those embedded inequities and the politics that surrounds that."

Obama said keeping the global temperature rise to 1.5 degrees Celcius "will not be easy. It is going to be hard," he said, because political institutions move slowly, even when leaders are well intentioned; and international cooperation has always been difficult, even more so now with "all the misinformation and propaganda that can flood out through social media."

"So, to all the young people out there, as well as those of you who consider yourselves young at heart, I want you to stay angry. I want you to stay frustrated. But channel that anger, harness that frustration. Keep pushing harder and harder for more and more. Because that's what's required to meet this challenge. Gird yourself for a marathon, not a sprint. Because solving a problem this big and this complex and this important has never happened all at once."