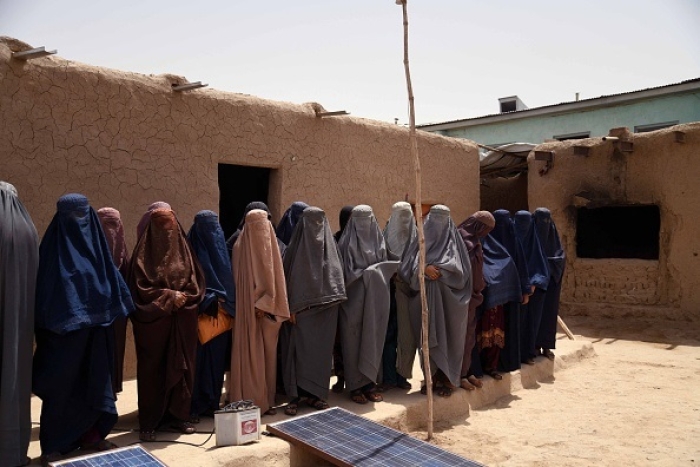 Burqa-clad women in Afghanistan are seen outside a shampoo and soap factory in Kandahar on July 30, 2022. (Photo by JAVED TANVEER/AFP via Getty Images)

(CNSNews.com) - The oppression of women goes from bad to worse in Afghanistan, according to the Special Inspector General for Afghanistan Reconstruction (SIGAR), who has just submitted his 56th quarterly report to Congress.

SIGAR notes that the newly imposed restrictions follow the Taliban's refusal to reopen secondary schools (grades 7–12) for girls and recall the Taliban’s repressive rule in the 1990s. 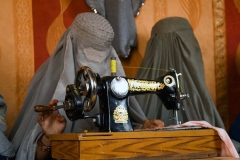 Afghan women use the sewing machine at a handicraft workplace in Kandahar on July 30, 2022. (Photo by JAVED TANVEER/AFP via Getty Images)

Women mandated to cover themselves

According to the report:

"[T]he Taliban's Ministry for the Propagation of Virtue and the Prevention of Vice decreed on May 7 that women must cover themselves completely when in public.

"The decree said that while women were not specifically mandated to wear the Afghan all-covering burqa if they were required to go outside, the burqa was preferable to a loose-fitting hijab or covering.

"The decree went on to say the 'best' hijab is not to leave the house at all. It further stipulated that the male relatives of women who failed to cover their faces in public would be subject to punishments including jail time or dismissal from government jobs."

SIGAR reports that the Taliban issued a new mandate on May 19 requiring women in media to cover their faces while broadcasting.

"Women media members initially defied the amended decree and appeared on May 21 without face coverings," the report continued:

"The news station said it would follow Taliban mandates, but contended that virtual representations of women should not fall under the hijab decree. The Information and Culture Ministry, however, said the decree is 'final and non-negotiable.'" 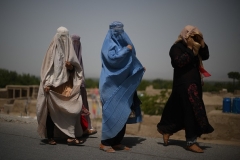 Afghan women walk alongside a road in Kandahar on July 29, 2022. (Photo by DANIEL LEAL/AFP via Getty Images)

"In conjunction with the mandate to cover, the Taliban are limiting women’s freedom of movement.

"In March, the group banned women from air and long-distance travel without the accompaniment of a male guardian (known as a mahram). Unable to board a plane, cross borders, or travel more than 48 miles from home without a male chaperone, women are now more likely to adhere to the Taliban admonition that they remain in their houses.

The report says the Taliban has "redefined the types of employment deemed appropriate for women, according to their interpretation of Islamic law."

"Women’s participation in the workforce had slowly increased from 14% of the working-age population in 1998 to 22% by 2019," the report said. "Even under the previous Afghan governments, a dearth of health-care workers and female teachers remained a significant barrier to achieving development goals. With access to education limited and with women pressured to stay home, it is unlikely these metrics will improve under the Taliban."

SIGAR notes that with women and girls largely excluded from employment opportunities and access to education, local media report more forced marriages, including the marriage of underage girls."

In 2001, when President George W. Bush ordered troops into Afghanistan, the U.S. made the rights of Afghan women and girls a reconstruction priority.

As the SIGAR report noted, between 2003 and 2010, Congress appropriated $627 million for gender-focused programming. "SIGAR found that USAID, State, and DOD disbursed $787.4 million to programs focused on women and girls from 2002 to 2020. The actual figure is likely much higher, as many programs had gender-related components not reflected in this composite figure."

But those days are gone. Conditions for Afghan women began deteriorating as soon as President Joe Biden pulled all U.S. troops out of Afghanistan a year ago.

Biden later told ABC's George Stephanopoulos, "The way to deal with that [women's rights] is putting economic, diplomatic, and international pressure on them [Taliban] to change their behavior."

In a letter to President Biden dated March 30, 2022, 20 female U.S. senators of both parties urged Biden to "support the rights and freedoms of Afghan women and girls."

"We write to you today deeply concerned about the future of Afghanistan following the unjustifiable cancellation of secondary school for Afghan girls," the female senators wrote:

"While we are not surprised that the Taliban has once again dismissed the rights of girls and young women, we are alarmed by the implications of their decision for 50 percent of the population and the future of Afghanistan.

“To this end, we urge you to convey clear consequences to the Taliban for their actions, and take immediate steps to bolster support for Afghan women and girls."