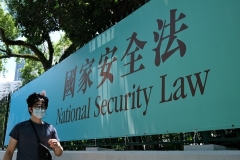 A man walks past a government banner notifying the public about China's new National Security Law imposed on Hong Kong on July 15, 2020. (Photo by ANTHONY WALLACE/AFP via Getty Images)

(CNSNews.com) - National Security Adviser Robert O'Brien on Tuesday commended British Prime Minister Boris Johnson for inviting millions of Hong Kong residents to move the United Kingdom, and O'Brien said  that President Trump "would like to have some of those folks come to America."

"We're going to be looking for opportunities to give asylum. And I think you'll hear more about that from the State Department very soon," O'Brien told radio host Guy Benson.

"But we're going to be looking for opportunities to give asylum to a significant number of Hong Kong citizens who are -- who are now being totally oppressed by the Chinese Communist Party."

"This law gives my administration powerful new tools to hold responsible the individuals in the entities involved in extinguishing Hong Kong's freedom," Trump told a news conference on Tuesday.

"We've all watched what happened, not a good situation. Their freedom has been taken away, their rights have been taken away, and with it goes Hong Kong, in my opinion, because it will no longer be able to compete with free markets.

"A lot of people will be leaving Hong Kong, I suspect, and we're going to do a lot more business because of it, because we just lost one competitor. That's the way it is," Trump said.

The president on Tuesday also signed an executive order ending U.S. preferential treatment for Hong Kong, which will now be treated the same as Communist China.

"There are up to 2.7 million people that were either born or had parents who were born in Hong Kong at a time that Hong Kong was a British territory," O'Brien noted.

"And so for Boris Johnson to open up the U.K. is really a commendable action. It's great for the U.K. I mean, look, these are people that are being oppressed by communists now. They're losing their sovereignty. They were promised one country, two systems. In fact they're getting one country, one system. And the system they're getting is a terrible communist dictatorship.

"By the way, these people, as the president likes to say, they're smart as heck and they work hard. They're going to come to the U.K., and I think even if they...Even if they get a small number of the 2.7 million who are eligible to come obtain British citizenship, that's going to be a giant economic shot in the arm for the U.K.

"It may offset Brexit. I mean can you imagine all those -- all those hardworking, smart Hong Kongers coming to London and how that'll improve the city as a world financial hub?" O'Brien asked.

In a June 1 podcast hosted by the American Enterprise Institute, Secretary of State Mike Pompeo was asked if the U.S. would welcome the people of Hong Kong to come to the United States "and bring their entrepreneurial creativity to our country?"

"We are considering it," Pompeo said:

"I don't know precisely how it'll play out. The British have, as you know, a different relationship. A lot of these folks have British national passports.

There's a long history between Hong Kong and the United Kingdom that's very different, but we're taking a look at it."