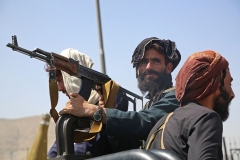 Taliban fighters stand guard in a vehicle along the roadside in Kabul on August 16, 2021, after a swift end to the 20-year war, as thousands of people mobbed the city's airport trying to flee the group's feared hardline brand of Islamist rule. (Photo by AFP via Getty Images)

(CNSNews.com) - Rep. Michael McCaul (R-Texas), the top Republican on the House Foreign Affairs Committee, on Sunday said the Biden administration ignored warnings, including one from him, about the strength of the Taliban and the unravelling of the country:

As a result, the chaos witnessed by the world on Sunday is "an unmitigated disaster of epic proportions," McCaul said:

For months, we have been warning. Ambassador Crocker and I wrote an op-ed in "The New York Times" about what we need to do now to save the interpreters, what we need to do to have our ISR, intelligence, surveillance, reconnaissance capabilities in the region.

Now we are going dark. They totally blew this one. They completely underestimated the strength of the Taliban. And Jake, they didn't listen to the intelligence community, because every time I got an I.C. briefing assessment, it was probably the grimmest assessment I have ever heard on Afghanistan.

And yet they -- the State Department, Secretary Blinken, the politicos in the White House wanted to paint this rosy picture that somehow these peace talks in Doha were going to deliver a rabbit out of the hat at the 11th hour.

Well, guess what? That didn't happen. And now they're sending 5,000 troops in to try to save our embassy personnel. They are destroying classified documents as I speak. The visa process has stopped. And now I'm -- President Biden said in July this is not going to be a Saigon, it's not like South Vietnam.

And guess what? When I talk to Ambassador Crocker, we think it's going to be worse than Saigon. When they raise the black flag of Taliban over our United States Embassy, think about that visual.

McCaul said the fall of Afghanistan to the Taliban is like history repeating itself. He pointed to the Obama-Biden administration's troop withdrawal from Iraq that gave rise to ISIS. And he said he convinced President Trump to keep a residual force in Syria to provide "stability in the region."

McCaul noted that the Taliban has never cut its ties to al Qaeda, and he predicted that Afghanistan will once again become a "breeding ground for terrorism."

"And I hate to say this. I hope we don't have to go back there, but it will be a threat to the homeland in a matter of time."

Asked if President Trump shares blame for the Taliban takeover because he negotiated a troop withdrawal with them directly, McCaul said no -- Trump's agreement was always going to be "conditions-based," and "the conditions have not been fulfilled."

He said the Taliban has violated two elements of the Trump agreement by attacking provincial capitals and never cutting ties with al Qaeda.

We can talk hypothetically about what the prior president may -- may or may not have done. But Harry Truman once said, the buck stops here. And for President Biden to try to throw all this on the former administration is a lack of responsibility and accountability.

But, instead, they had no strategy. And now they're knocking on the doorstep of Kabul. The noose is tightening around the Kabul neck. And there's still no strategy, other than race to the airport and evacuate as many people as you can. This is a really sad day, not only for America, but for the Afghan people, the women left behind, and I would say our international standing in the world.

We look so weak. And it's so embarrassing. And you're right. China hosted the Taliban in China, saying they would call them the legitimate government. Don't think for a minute now the Chinese are not going to go into Afghanistan, get the rare earth minerals, and put a base of operations in Afghanistan.

We have negotiated out of weakness here. And the Taliban -- I'm sorry -- our foreign adversaries are emboldened, that being Russia, China, Iran. Remember, we have no ISR capability anymore. We're going dark in Afghanistan as a dark veil covers the country.

McCaul said Biden has reversed so many of Trump's policies -- remain in Mexico, the Paris accords, the Iran JCPOA, to name a few.

"The idea that President Biden couldn't come in and reverse this the agreement, why this one, right? He's the president of the United States. He's the commander in chief.

"And for him to skirt this responsibility, when it was his decision, and it's -- the consequences from a national security standpoint are severe, because now they can say they defeated the United States in Afghanistan, the infidel, just like they defeated the Soviet Union. This will have long term-ramifications," McCaul said.