IG Report to Congress: 'Approximately 74,000 Afghan Nationals Have Come to the US' for Resettlement 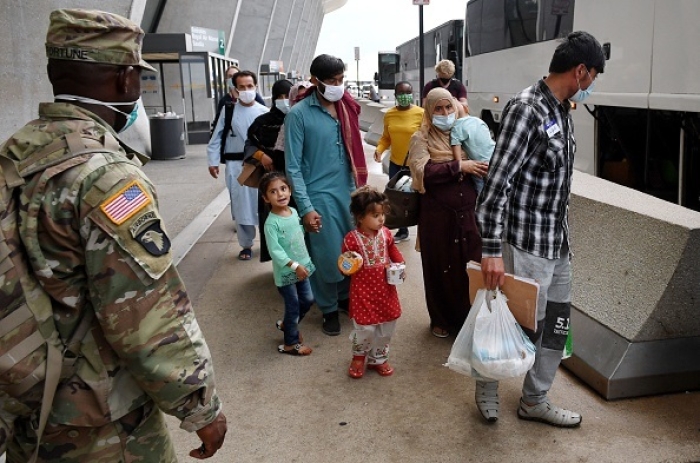 Afghan refugees board a bus at Dulles International Airport in northern Virginia on August 27, 2021 after being evacuated from Kabul following the Taliban takeover of Afghanistan. (Photo by OLIVIER DOULIERY/AFP via Getty Images)

(CNSNews.com) - The most recent inspector-general report to Congress on Afghanistan explains where things stand following the chaotic U.S. withdrawal from that country last year.

The quarterly report covers the period January 1, 2022 through March 31, 2022, offering the latest terror assessment, an update on U.S. equipment left behind, and the dire humanitarian situation.

It also updates the Homeland Security Department’s effort to resettle tens of thousands of Afghans through Operation Allies Welcome (OAW), including those who worked alongside Americans in Afghanistan.

The report, citing DHS as its source, says "approximately 74,000 Afghan nationals have come to the United States as part of OAW, the largest number of foreign evacuees arriving at one time in nearly 50 years."

The report says OAW has worked with more than 350 resettlement agencies and community partner organizations to resettle Afghan families in the United States and will continue to do so as more are processed for entry.

According to the report:

"Prior to entering the United States, Afghan evacuees must complete a multi-layered screening and vetting process that includes biometric and biographic screenings conducted by intelligence, law enforcement, and counterterrorism professionals from the DoD, DoS, DHS, FBI, National Counterterrorism Center, and other Intelligence Community partners.

"According to the DHS, Afghan evacuees also receive age-appropriate vaccinations, including the COVID-19 vaccine, based on CDC guidelines prior to resettlement in communities across the United States.

"On February 19, the DHS announced that all remaining Afghan arrivals had departed Joint Base McGuire-Dix-Lakehurst in New Jersey, the last U.S. military facility providing temporary housing for Afghan arrivals. These individuals have since been resettled in communities across the United States."

(As of March, the report said, any remaining OAW-eligible Afghans are being processed at the National Conference Center in Leesburg, Va., before moving on to resettlement agencies.)

"According to the DHS, approximately 2,800 Afghans evacuees remained at facilities in the United Arab Emirates and Qatar as of this quarter. Additionally, the U.S. Government has received more than 43,000 humanitarian parole requests from Afghans in Afghanistan or third countries hoping to come to the United States.

"U.S. officials have adjudicated fewer than 1,700 of these parole applications and denied 90 percent of those adjudicated, according to U.S. Citizenship and Immigration Services data."

Other findings from the first-quarter IG report:

-- "The U.S. military has not conducted any airstrikes in Afghanistan since the completion of evacuation efforts on August 29, 2021."

"General Michael E. Kurilla, the incoming Commander of USCENTCOM, said that conducting counterterrorism operations without a physical presence in Afghanistan or any neighboring countries was “extremely difficult, but not impossible.” General Kenneth F. McKenzie, Jr., the outgoing Commander of USCENTCOM, said that U.S. air assets must travel long distances to arrive over Afghan airspace, which limits the amount of time they can conduct operations before needing to return for refueling. This limitation, combined with the loss of human intelligence on the ground, has significantly reduced the DoD’s capacity to track terrorist targets in Afghanistan."

-- “ISIS-K remained the top terrorist threat in Afghanistan with approximately 2,000 members operating in the country.”

"USCENTCOM assessed that ISIS-K has increased its recruitment and attack capabilities since U.S. and coalition forces withdrew from Afghanistan and reduced their counterterrorism pressure. If ISIS-K is able to continue to exploit a reduced counterterrorism environment, it will likely be able to establish external operations
capabilities targeting the West, including the U.S. homeland, in the next 12 to 18 months, according to USCENTCOM."

"The DIA reported little activity from al-Qaeda and its regional affiliate, al-Qaeda in the Indian Subcontinent, in Afghanistan, who continued to maintain a low profile at the behest of the Taliban."

-- "Neither the U.S. Government nor any other sovereign state has recognized the Taliban as the official government of Afghanistan, though some took steps towards normalized relations during the quarter.

-- "The DoD continued to account for U.S. property, equipment, and supplies provided to the Afghan security forces that was destroyed, taken out of Afghanistan, or remained in Afghanistan following the U.S. military withdrawal."

"The DoD estimated that $7.1 billion of the equipment that had been previously transferred to the Afghan government remained in Afghanistan in varying states of repair when U.S. forces withdrew in August 2021. U.S. forces deliberately destroyed many major items, such as ground vehicles and aircraft, during the withdrawal process. The DoD said that while the Taliban acquired some functional vehicles left behind, the vehicles’ operational capability will continue to degrade absent U.S. maintenance and logistics support. However, the DIA also reported that the Taliban had repaired some damaged aircraft and made incremental gains in its capability to employ an estimated 41 usable helicopters and airplanes captured from the former Afghan government."

-- "The Taliban sought to consolidate power in Afghanistan during the quarter, building up governing institutions and imposing laws in line with the regime’s strict interpretation of Islam."

Afghan journalists continued to face harassment, violence and detentions during the quarter; the Taliban announced a ban on all foreign media and issued strict guidelines for Afghan programming; the Taliban’s Ministry of Education reversed a previously announced policy that would have allowed girls to attend secondary school. "According to a UN report, nearly 59 percent of Afghanistan’s population required critical humanitarian assistance in 2022 due to food shortages, economic challenges, insecurity, and multiple disease outbreaks."

The report notes that work continues on 20 other "oversight projects" and investigations related to the August 2021 U.S. withdrawal.

Those include a review of the Special Immigrant Visa program; a review of the planning for the emergency evacuation of the U.S. Embassy in Kabul; and an intelligence community review of the screening and vetting of Afghanis admitted to the United States in August 2021.