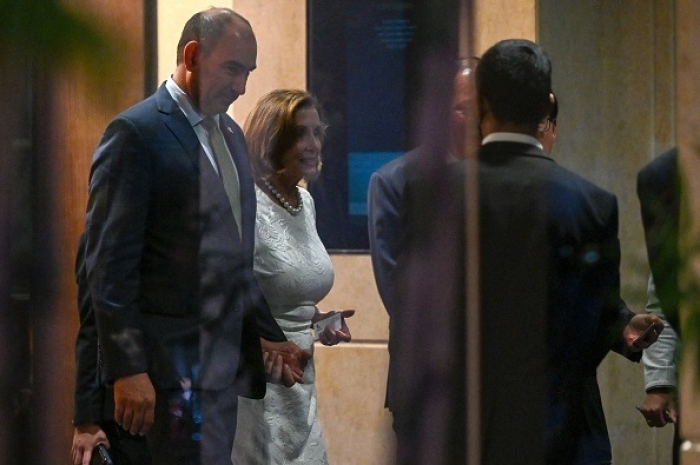 House Speaker Nancy Pelosi leaves a reception organised by the American Chamber of Commerce in Singapore on August 1, 2022. (Photo by ROSLAN RAHMAN/AFP via Getty Images)

(CNSNews.com) - Press reports on Monday say House Speaker Nancy Pelosi will visit Taiwan during her current trip to Asia, even though the stop is still not listed on her itinerary.

Chinese officials on Monday continued fuming over the Pelosi's possible stop in Taiwan, a sovereign nation which China claims as its own territory.

Last week, a Chinese foreign ministry official warned that China will safeguard its national sovereignty and territorial integrity: "Those who play with fire will perish by it. It is hoped that the US will be clear-eyed about this. The US should honor the one-China principle..."

"Their current bluff is just that," Gingrich told "Fox & Friends" on Monday:

"Look, they are harassing Taiwan every week. They are flying aircraft into Taiwanese space; they recently announced a live-fire zone off of Taiwan.

"They're doing all they can to rattle the Taiwanese people, who are 24 million free people with a free election and a free news media, who produce, by the way, about 67 percent of the world's high-value computer chips. So it's very important place.

"I hope Nancy is going to go there. I think having -- once it became public, and I wrote a newsletter about this last week...I said, once its public, you can't back down.

“And I saw that Herschel Walker yesterday had done a video saying exactly the same thing, that, you know, you have to stand up to Chinese communists or they will interpret it as a sign of weakness and they'll grow even more aggressive."

President Biden has said only that the U.S. military opposes Pelosi's reported trip to Taiwan, but the president himself has not publicly discouraged her from going. Why not? Gingrich was asked on Monday:

"Look, I don't know to what extent Biden is influenced by the million dollars his family has made out of dealing with Communist China," Gingrich said.

"If you think you can appease the Chinese communists, you are completely misreading history. They are very tough, smart people, and they are going to take as much as you give them."

'This is an important trip for the speaker to be on'

Admiral John Kirby, a spokesman for the Biden National Security Council, said the White House wants to makes sure that Pelosi can travel safely overseas, "and we're going to make sure of that."

"There's no reason for any actions to be taken. It is not uncommon for congressional leaders to travel to Taiwan. It is very much in keeping with our policy and consistent with our support to Taiwan under the Taiwan Relations Act.

"We shouldn't be, as a country, we shouldn't be intimidated by that rhetoric or those potential actions. This is an important trip for the speaker to be on and we're going to do whatever we can to support her."

Kirby emphasized that there is no change to U.S. policy, which is focused on maintaining a "free and safe and open Indo-Pacific."

He called it an "important region," both for the global economy and for geopolitical reasons:

"So there's an awful lot of business for the speaker of the house to conduct on a trip like this. And, you know, she can speak to her stops and what she's trying to accomplish.

"But I will tell you, just a couple points -- five of our seven treaty alliances are in the Indo-Pacific region. So the United States, President Biden is committed to making sure we revitalize those alliances and that we are able to meet our security commitments in it that region.

"Number two, it's a very dynamic region right now, and part of that dynamism is caused by the aggressive and coercive behavior that China is conducting throughout the region."