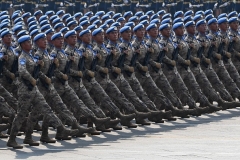 The Chinese People's Liberation Army marches through Tiananmen Square in Beijing on October 1, 2019, to mark the 70th anniversary of the founding of the Peoples Republic of China. (Photo by GREG BAKER/AFP via Getty Images)

On Sunday, Ratcliffe told Fox News's Maria Bartiromo that the op-ed was more of an "intelligence briefing to the American people."

So, one of the things I did in this piece was to work hard to try and get information declassified to a level that I could talk about.

It's about putting the state first. And that is the exact opposite of what has always made America great. Individual liberties, freedoms, free enterprise -- those things are all at stake if China dominates.

Ratcliffe said the COVID-19 pandemic, which originated in China, is another way the communist government is seeking dominance:

They intentionally and deliberately downplayed it in their country, pressured World Health Organizations, and allowed it to spread to the rest of the world. And that didn't just have the effect of wrecking the global economy. It didn't just have the effect of killing millions of people, including hundreds of thousands of Americans. It also had grave political consequences.

Here in the United States, the pandemic influenced a lot about how people voted, but also how they had to vote. As a result of the pandemic, we saw state legislatures as little as 90 days before the election adopting new voting procedures. Essentially, we had universal mail-in balloting across this country in a way that we hadn't seen before.

And to that point, almost 73 percent of the American people this year voted before Election Day, a good percentage of those by mail. That's about an 80 percent increase over anything we have ever seen before.

So, it's little wonder that we see what's happening around the country as a result of that, with mail-in balloting and all of the questions and the questions that are being raised in lawsuits and by everyday Americans about what happened in the election.

Ratcliffe said the pandemic "created the opportunity" for the election chaos we see today:

"And what you saw was lawmakers in states across the country adjusting to the pandemic, saying, we have to vote differently in this country because of the pandemic. And we saw that.

"And as a result, it's little wonder, when you have procedures adopted as little as 90 days before the election, that there's so much question and controversy."