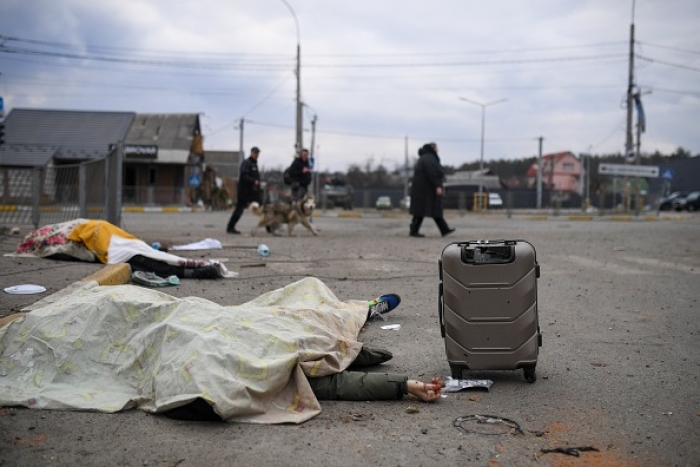 Bodies lie in the streets of Irpin, Ukraine as Russia continues its indiscriminate attacks on civilians. (Photo by Murat Saka/ dia images via Getty Images)

As White House spokeswoman Jen Psaki later explained, “The president was answering a direct question that was asked and responding to what he has seen on television. We have all seen barbaric acts, horrific acts by a foreign dictator in a country that is threatening and taking the lives of civilians, impacting hospitals, women who are pregnant, journalists, others.”

But at a hearing of a House Foreign Affairs subcommittee on Wednesday, one witness told lawmakers that even the most horrific acts we're all seeing on television can be difficult to prosecute as war crimes:

“And, from my perspective, having run many war crime investigations in the past, really the issue that I’m looking at here is one of DPH -- direct participation in hostilities by the civilian population.

“We have some very brave Ukrainians taking up arms to defend themselves and their country. But because of this, they are now directly participating in hostilities and they make themselves lawful targets.

"When that happens, it becomes difficult for war crime investigators to go into a site -- and say a bomb was dropped on a building, an apartment building, let's say -- and was that because the Russians were very poor in their targeting and didn't do it well -- they're not very professional? That's not a war crime.

In his opening statement to the committee, Garlasco pointed to his experience investigating Russian war crimes in Syria.

“We are witnessing likely Russian war crimes broadcast daily from within Ukraine,” he told the subcommittee.

“Unfortunately, for those of us that investigate war crimes, none of this is new, as these acts by Russia have been tested on the battlefield of Syrian villages, towns, and cities. We have all been horrified by the brazen attack on a maternity hospital in the city of Mariupol last week. I fear we will see many more such attacks on protected places because of Russia’s prior practice.”

As it did in Syria, Russia is trying to bomb the population into submission, using “largely unguided, indiscriminate” weapons, Garlasco said.

“These unguided bombs should not be employed in populated areas due to their inherent inaccuracy and widespread effects. Russia also relies on cluster munitions and their inherently indiscriminate effects when used in cities. Syria will likely be contaminated by Russian cluster bombs for decades. We are seeing the same weapons in Ukraine.”

Garlasco told the committee that the use of starvation as a weapon of war is a war crime. “I fear we will see this same tactic applied in Ukraine as Russia moves to encircle Kiev and other urban areas. They may also attack aid convoys as happened in Syria,” he said, noting that the U.N. labeled the Syrian convoy attack as a war crime.

Rep. Meijer asked another witnesses if there is any open-source information that shows Russian military officials are either ordering or carrying out indiscriminate attacks on civilian areas that likely constitute war crimes; and if they seem to be aware that they are committing war crimes for which they might be prosecuted.

Christo Grozev is the CEO of Bellingcat, a company that does investigations based on open-source data. He told Meijer:

“There's a lot of verified audio recordings, intercepts of telephone calls, and this is actually one of the silver linings of this conflict because of the incompetence of the Russian Army. They have totally been unable to use their secure communication system, and they've largely communicated by open channels.

“There are tens of thousands of intercepted phone calls that will be made available and validated by future investigators, and in some of them, you could hear the soldiers and the officers reporting to their loved ones that actually they have been told to disregard civilian care and care of civilian casualties. Not necessarily to target them offensively, but to not really put that on the priority list and to assume that they should be in the line of fire.

“And this alone is evidence that they're aware and their commanders are aware of the likely commission of crime.”

Meijer noted that many of the Russian soldiers appear to be poorly trained conscripts.

Grozev told him those soldiers may be taught about Geneva Convention rules of armed conflict, but at a “very rudimentary level.”

“But (it's) important to know that in this conflict, we have private military contractors that are heavily used by the Russian side exactly to deflect responsibility. And we have at least several hundred, deployed in Ukraine, maybe more.

“We've talked to some of them, and we know that they've been given a free hand to actually go after a list of civilian or military targets of people -- kill lists, to go after and kill without necessarily complying with any international norms of warfare.”

Grozev said based on the few intercepts that have been made available, there are cases of officers “being aware of what they're doing, being uncomfortable, but still holding to orders. So it's really going to be a case...of holding the chains of command to the person who was in charge of authorizing such unlawful methods.”

In his opening statement, Grozev told the committee that his company, Bellingcat, is gathering, verifying and preserving evidence of harms to civilians in Ukraine for anticipated eventual prosecution.

“In just 19 days of war, Bellingcat has recorded more than 350 incidents that caused harm to civilians," he said.

"Of these, just over 10 percent appear to be egregious cases of violations of the laws of war, with unwarranted targeting of residential buildings, and in some cases even hospitals and maternity wards, and with indiscriminate use of inhumane munitions – such as cluster bombs -- in or near residential areas.

“While Bellingcat is has not completed the process of attribution of origin of attack, most of these attacks appear plausibly attributable to the Russian side of the conflict.

“We believe many of these will likely be investigated as possible war crimes,” Grozev said.