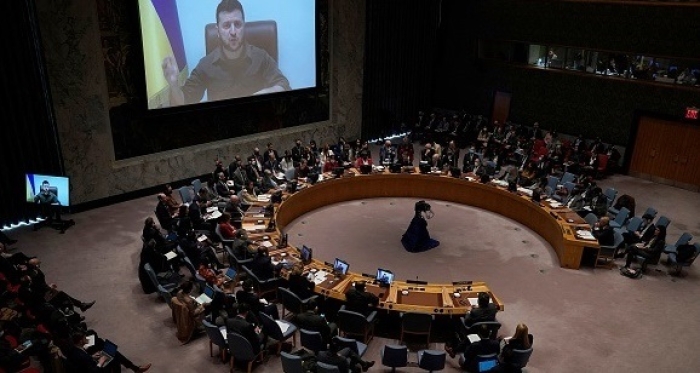 (CNSNews.com) – Addressing the U.N. Security Council on Tuesday, Ukrainian President Volodymyr Zelensky put his finger on an uncomfortable truth – that the body charged with global peace and security is not fulfilling its function because the aggressor is a veto-wielding permanent member.

“We are dealing with a state that turns the right of veto in the U.N. Security Council into a right to kill,” Zelensky told the council by video link, speaking through an interpreter.

“Which undermines the whole architecture of global security, which allows evil to go unpunished and spread in the world, destroying everything that can work for peace and security,” he said.

If allowed to continue, the end result will be that every country relies on the power of arms to ensure its security, not on international law or institutions.

In that case, Zelensky said, the United Nations “can simply be dissolved.”

Ukraine’s president said that if those listening did not believe that the time had come to shut down the U.N., then they should act immediately to reform the U.N. system, “so that the right of veto is not a right to kill; so that there is a fair representation of all regions of the world on the Security Council.”

Speaking to reporters after the meeting, Ukrainian Ambassador Sergiy Kyslytsya said that one of the outcomes of Russia’s war on Ukraine “should be a real and serious revision of the way the Security Council functions.”

If there was a return to business as usual, Kyslytsya said, “then, as my president said, this organization should dissolve itself.”

The current security architecture is not capable of guaranteeing and providing security, and needs to be “revisited,” with a system set up that provides security to nations in every region of the world.

There needs to be “a very thorough discussion” on the matter, he added. “After the war.”

“President Zelensky is right that there is a problem with the Security Council,” Secretary of State Antony Blinken said during an interview in Brussels on Wednesday.

Blinken said there were signs of the broader U.N. coming together in support of Ukraine, but conceded again that “the Security Council itself does have a problem that is a real challenge, and unless and until Russia acts as a responsible member of that council, the problem will remain.”

The Security Council’s makeup largely reflects the balance of power at the end of World War II: The five permanent members – the U.S., Britain, France, Russia and China (which in 1971 took the seat previously held by Taiwan) – all have veto power, while the remaining ten, which serve for two-year terms, do not.

U.N. member-states have been discussing reforming the council for decades but every attempt to do so has run into insurmountable hurdles. Most arise from the fact any veto-wielding member can block an initiative it opposes – including any reform that will dilute its own power or that of its allies.

Tuesday’s Security Council meeting focused on allegations of atrocities and deliberate killings of large numbers of Ukrainian civilians in areas near Kyiv recently vacated by the occupying Russian forces. 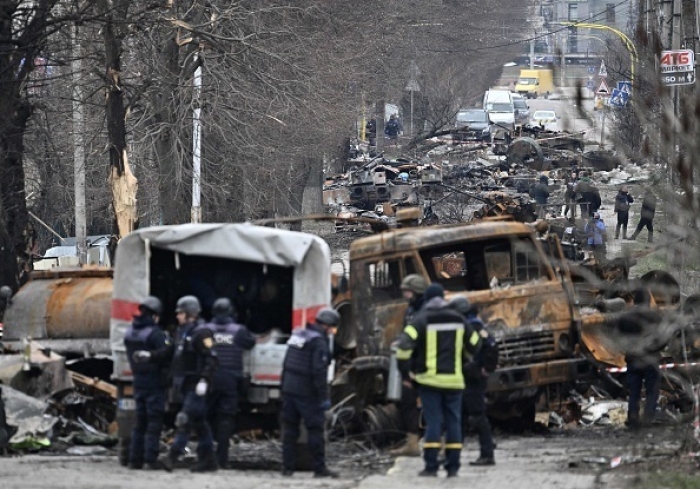 Ukrainian engineers clear mines among destroyed vehicles in the town of Bucha, recently vacated by Russian occupation troops. Government officials say more than 400 civilian bodies have been recovered in Bucha and surrounding areas near Kyiv, many of which were buried in mass graves. (Photo by Genya Savilov/AFP via Getty Images)

Russian Ambassador Vassily Nebenzia repeated his government’s denials of any wrongdoing, and accusations of a “false flag” provocation designed to tarnish Russian troops.

The slain Ukrainians, he said, were “killed by their own radicals in order to – in the best Goebbels tradition – blame the Russian army for their deaths.”

In her statement, U.S. Ambassador to the U.N. Linda Thomas-Greenfield spoke about the U.S. push to have Russia suspended from the U.N. Human Rights Council, whose “credibility,” she said, was harmed by Russian participation.

She called on members of the U.N. General Assembly to vote to oust Russia from the HRC.

In media interviews after the meeting, Thomas-Greenfield was asked about Ukraine’s stance on Russia’s role in the Security Council.

“Should they be kicked off the Security Council, and can that happen?” asked MSNBC’s Joy Reid.

“They – look, the Security Council was created as a product of the creation of the U.N. after World War II,” she replied.

“We can make their presence in that body very uncomfortable. And we have done that.”

Judy Woodruff of PBS NewsHour also raised the issue with the ambassador.

“They are a permanent member of the Security Council,” said Thomas-Greenfield. “That we cannot change, but we can isolate them in that position.”

“We’ve isolated them in the Security Council,” she said. “You may have heard the speeches today. Not a single country spoke without speaking of the horror that they are seeing happening in Ukraine and calling for the Russians to cease their unconscionable war on the Ukrainian people.”

(In his statement to the meeting, Chinese Ambassador Zhang Jun called the reports and images of civilian deaths in Ukraine “deeply disturbing,” but added that “any accusations should be based on facts. Before the full picture is clear, all sides should exercise restraint and avoid unfounded accusations.” Zhang said the international community wanted “an early end to the conflict,” but did not call on Russia to end its invasion.)