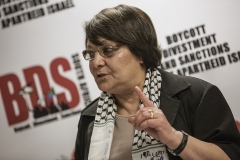 (CNSNews.com) – YouTube on Wednesday stymied a controversial attempt by San Francisco State University academics to provide a platform for a Palestinian woman who hijacked two aircraft of behalf of a terrorist group decades ago, interrupting the live stream “for violating YouTube’s Terms of Service.”

Earlier, both Zoom and Facebook had reportedly refused permission for their video services to be used for the webcast featuring Leila Khaled, a leading member of the Popular Front for the Liberation of Palestine (PFLP), a U.S.-designated foreign terrorist organization (FTO).  U.S. Jewish organizations welcomed the development.

The General Union of Palestine Students (GUPS) and allies fumed at what they called an “attack on academic freedom” and demanded that SFSU hold those responsible accountable, and “provide an alternative platform so online classrooms can continue broadcasting without censorship.”

SFSU president Lynn Mahoney had, in fact, sought to get Zoom to reconsider its position that the webinar would violate its terms of service or U.S. law. She said in a statement Wednesday that the university had “worked hard to prevent this outcome and have been actively engaging with Zoom.”

In her statement, Mahoney acknowledged the strong feeling on both sides of the debate, while expressing her steadfast “support of freedom of expression and academic freedom.”

“Zoom’s cancelation of the event will be deeply wounding to some members of our community who will feel themselves and their dissent silenced once again, just as the participation of Leila Khaled in a class panel discussion is deeply wounding to others in our community,” she said, voicing the hope the incident would prompt “courageous conversations centered on challenging issues.”

Now in her 70s, Khaled – who lives in Jordan and remains a member of the Marxist PFLP’s political bureau – half a century ago carried out two aircraft hijackings, placing the lives of hundreds of 233 passengers and 22 crew members at risk. The targeted aircraft were a TWA Boeing 707 on a service from Rome to Tel Aviv, and an El Al Boeing 707 en route from Amsterdam to New York City.

In both cases she was arrested but released quickly before being put on trial. In the second instance, British authorities freed her in exchange for hostages seized in another PFLP plane hijacking.

For her crimes she became an icon of the Palestinian cause: The webinar organizers, SFSU’s Arab and Muslim Ethnicities and Diasporas (AMED) Studies program, billed her as “Palestinian feminist, militant, and leader Leila Khaled,” while GUPS described her as a “Palestinian resistance leader.”

Last week the Lawfare Project wrote to Zoom, warning that by knowingly allowing Khaled to use its platform in the way planned it could expose itself to criminal liability under U.S. law prohibiting the provision of material support or resources to a designated FTO.

Zoom subsequently informed the Lawfare Project that, “In light of the speaker’s reported affiliation or membership in a U.S.-designated foreign terrorist organization, and SFSU’s inability to confirm otherwise, we determined the meeting is in violation of Zoom’s Terms of Service and told SFSU they may not use Zoom for this particular event.”

The American Jewish Committee praised Zoom “for refusing to be used as a platform for the antisemitic terrorist Leila Khaled,” adding in a tweet, “If only @SFSU had the same moral compass.”

After Wednesday’s developments, the AJC thanked Google, which owns YouTube, and Facebook for “recognizing this event for what it is: incitement to violence. Still waiting for @SFSU to come to the same realization.”

An online petition posted by Wellesley Students for Justice in Palestine called for “academic freedom on Palestine,” and complained that “AMED Studies at SFSU is under attack from the ultra-right-wing Zionists for hosting a conversation with Palestinian freedom fighter, Leila Khaled.”

Half a Century Ago Leila Khaled Hijacked Two Aircraft in Europe; This Week She Was a Guest at the European Parliament (Sept. 27, 2017)