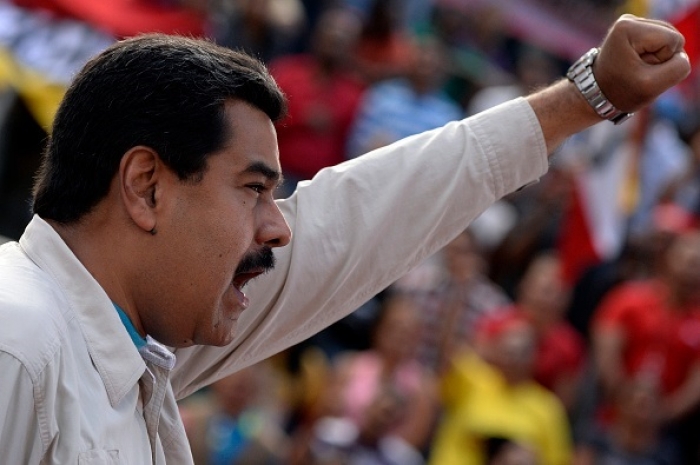 The U.S. government has not recognized Nicolas Maduro as Venezuelan’s president since 2019, a position shared by more than 50 other governments. (Photo by Federico Parra/AFP via Getty Images)

(CNSNews.com) – A senior State Department official declined to rule out the possibility the U.S. could drop oil sanctions on Venezuela to offset the effects of President Biden's ban on Russian imports, but White House Press Secretary Jen Psaki said Wednesday she had “nothing to preview or predict” on the matter.

The prospect of the administration buying oil from an authoritarian and corrupt socialist regime whose legitimacy it does not recognize to make up for the shortfall from Russia is troubling lawmakers on both sides of the aisle.

“The Biden administration’s efforts to unify the entire world against a murderous tyrant in Moscow is commendable but should not be undercut by propping up a dictator under investigation for crimes against humanity in Caracas,” he said.

“The democratic aspirations of the Venezuelan people, much like the resolve and courage of the people of Ukraine, are worth much more than a few thousand barrels of oil,” Menendez said.

U.S. officials paid a secret visit to Venezuela at the weekend, to discuss issues including Americans being held there and – Psaki confirmed earlier this week – “energy security.”

At the hearing Sen. Marco Rubio (R-Fla.), like Menendez a leading critic in Congress of the Maduro regime, asked Under Secretary of State for Political Affairs Victoria Nuland about the value of procuring Venezuelan oil, arguing that doing so would hold little benefit for the U.S. while profiting Maduro.

Rubio said the state oil sector was “in shambles after years of mismanagement [and] corruption” and “on a good day” produces about a quarter of what it once did.

“And every informed person in the oil industry will tell you that if we were to buy all of it – and we can’t because some of it’s already contractually committed – it would be an insignificant impact on the U.S. economy.”

Asked whether the secret weekend meeting was part of a U.S. policy “pivot” on Venezuela, Nuland said there was “zero pivot in our Venezuela strategy.”

She said the main aim of the trip had been to check on the welfare of the imprisoned Americans and to encourage the regime and opposition to return to the negotiation table.

“And then there were a number of other things that we discussed,” Nuland said, offering to talk about those in “another setting” – usually a reference to a classified briefing.

Sen Ron Johnson (R-Wisc.) later picked up on the questioning, asking Nuland directly if the U.S. would buy oil from Maduro.

She again said she could talk about “all the contours” of the trip to Venezuela “in another setting, or perhaps in a little while,” then repeated that the main focus had been to see the incarcerated Americans.

“Can you just state categorically that we will not be buying Venezuelan oil, we won’t – if we’re going to buy oil we’ll buy American oil, we won’t buy from a tyrant like Maduro?” Johnson asked.

Nuland offered to “put this whole oil issue in some context,” and went on to suggest that the type of oil Venezuela could provide could fill an important gap.

A U.S. ban on Russian oil, she said, “has an impact on all kinds of things.”

“The particular kind of Russian fuel that the U.S. imports, or had been importing, was heavy fuel. And that is only produced in a couple of countries around the world,” Nuland said.

“So whereas, you know, we have – we want to ban Russian oil, we also need to find a way, if we do not want to have major economic impacts as a result of this war and this squeeze on oil around the world, we have to find a way to get more capacity into the system.”

Asked again if the administration was “not ruling out buying oil from the tyrant Maduro in Venezuela,” Nuland replied, “I – will come back to you on that – on that question.”

The U.S. in 2019 accused Maduro of electoral fraud, and recognized the leader of Venezuela’s National Assembly, Juan Guaidó, as interim president in line with country’s constitution.

The U.S. Justice Department in 2020 unsealed an indictment accusing Maduro on narco-terror charges, and a $15 million reward was offered for information leading to his arrest and/or conviction.

At Wednesday’s White House briefing, Psaki was asked about the “energy security” element discussed during the weekend visit to Venezuela.

“What can Venezuela contribute to energy security?” a reporter asked.

“Well, I don’t have anything to preview for you in terms of additional talks or rounds of talks,” she said.

“Obviously, it is fact – factual, you all know that Venezuela is a large producer of oil,” Psaki said. “But in terms of any decisions or discussions or where that may go from here, I have no – nothing to preview or predict for you on that front.”