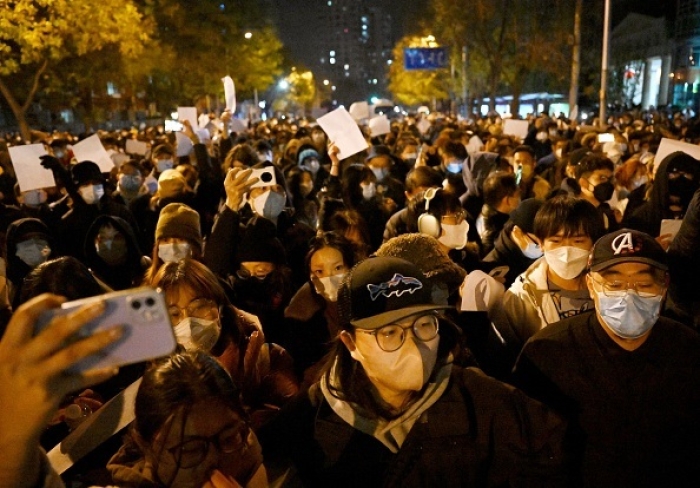 (CNSNews.com) – Simmering discontent over Beijing’s controversial “zero COVID” policy has boiled over into rare anti-government protests in several Chinese cities, with reports that some of the slogans being chanted are calling for an end to the Chinese Communist Party (CCP) and for President Xi Jinping to resign.

A deadly fire last week sparked protests among citizens long wearied by snap lockdowns, mass testing, and strict quarantine measures imposed by authorities trying to snuff out any flareup of COVID-19, almost three years after the respiratory pathogen first emerged in the Chinese city of Wuhan and spread across the globe.

The strategy has been championed by Xi personally.

Thursday’s fire in a high-rise apartment block in Urumqi, a city in the far-western Xinjiang region, cost ten lives. Government officials have denied that pandemic restrictions hampered fire and rescue efforts, but claims to that effect spread on social media.

Urumqi has been subjected to strict pandemic restrictions since August, although there were signs at the weekend that authorities were relenting, with an announcement that suspended public transport services will gradually resume from Monday, as will operations of “facilities related to people’s daily lives such as supermarkets, pharmacies, restaurants, and banks in areas identified as having a low risk of COVID outbreak.”

The apparent attempts to defuse public anger came amid weekend demonstrations by defiant Chinese citizens in Shanghai, Beijing, Wuhan, Chengdu, and elsewhere, including on university campuses.

In some of the demonstrations, people silently hold aloft blank sheets of paper, apparently a symbolic protest against government censorship and free speech restrictions.

News agencies report that among slogans being chanted were “Xi Jinping, step down,” “Communist Party, step down,” and “No to lockdowns. We want freedom.”

In a country where authorities have little tolerance for dissent against the central government, police used pepper spray to disperse groups, and multiple arrests were reported. 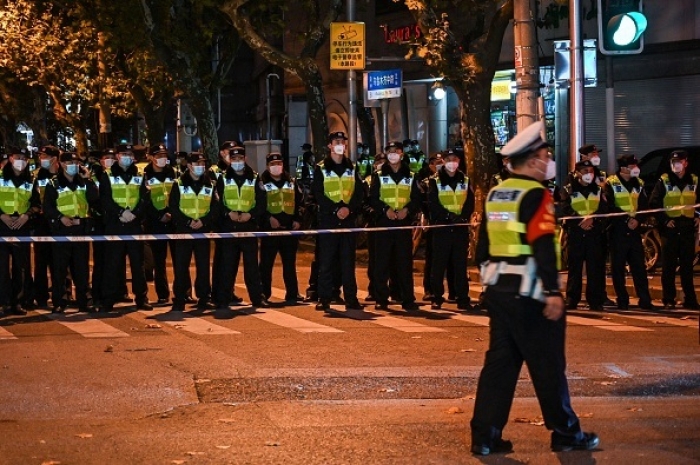 Chinese police officers block a street in Shanghai at the weekend to prevent a recurrence of protests that took place there a night earlier. (Photo by Hector Retamal / AFP via Getty Images)

The BBC said one of its reporters had been arrested covering protests in Shanghai and held for hours, during which time he was assaulted by police before being released.

“We have had no official explanation or apology from the Chinese authorities, beyond a claim by the officials who later released him that they had arrested him for his own good in case he caught COVID from the crowd,” a BBC spokesperson said. “We do not consider this a credible explanation.”

China recently recorded its first COVID-19 death in six months, amid a surge of cases of the Omicron variant that has exceeded the peak recorded in China last spring.

While other countries have largely eased restrictions and learned to “live with” the virus, China cracks down hard and fast in a bid to crush any emergence.

While its approach has been credited with keeping the official death toll exceptionally low – just over 5,200 fatalities throughout the pandemic in a country of 1.4 billion – the cost on the economy and social cohesion is believed to be significant.

During the CCP national congress last month that endorsed a historic third term for Xi at the helm, he again sought to justify his “zero COVID” strategy.

“In responding to the sudden outbreak of COVID-19, we put the people and their lives above all else, worked to prevent both imported cases and domestic resurgences, and tenaciously pursued a dynamic zero COVID policy,” Xi told the twice-a-decade gathering.

“In launching an all-out people’s war to stop the spread of the virus, we have protected the people’s health and safety to the greatest extent possible and made tremendously encouraging achievements in both epidemic response and economic and social development.”

China’s health authorities reported nearly 40,000 new cases on Sunday, a high number for China although modest in comparison to many other countries at their peaks.

Chinese state media outlets have been largely mum on the protests, but report on ongoing “policies to support families and businesses” struggling as a result of the restrictions.

They are also reporting on efforts by Beijing to crack down on “COVID-19 restriction malpractices” by local authorities, defined both as over-harsh or too lax measures.

“China has pursued a zero COVID strategy – obviously that is not our strategy,” Jha told ABC’s “This Week.” “We don’t think that’s realistic, certainly not realistic for the American people.”

“Our strategy has been, build up immunity in the population by getting people vaccinated,” he said. “That’s how you manage an incredibly contagious variant like Omicron.”

Jha said it would likely be “very, very difficult for China to be able to contain this through their zero COVID strategy.”

“I would recommend that they pursue the strategy making sure everybody gets vaccinated, particularly their elderly,” he said. “That, I think, is the path out of this virus. Lockdowns and zero COVID is going to be very difficult to sustain.”