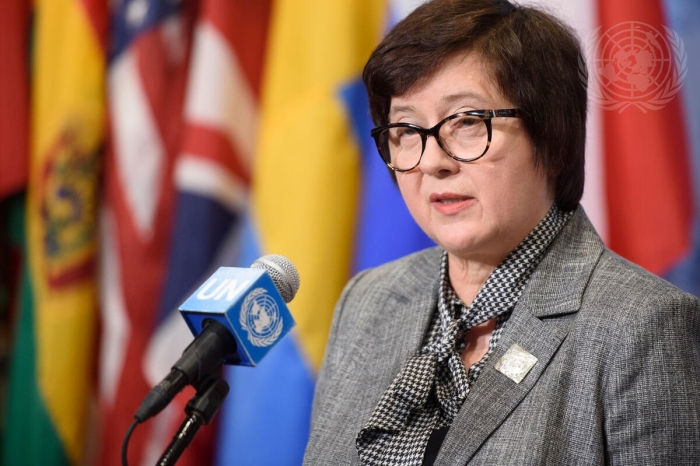 (CNSNews.com) – The U.N.’s top envoy in Lebanon has attracted a firestorm on Twitter after posting a tweet thanking a senior official in the Shi’ite terrorist group Hezbollah for a discussion “on issues of priority for Lebanon.”

“I thank Mr. Ammar Moussawi of Hizbullah for a tour d’horizon on issues of priority for Lebanon, including the election of a new President, the functioning of state institutions and the impact of regional and international developments on the country,” she tweeted.

Hezbollah operates both as a terrorist militia and a political faction, but its very existence as an armed militia violates two key U.N. Security Council resolutions.

Established as a proxy of the Iranian regime after the 1979 Islamic revolution, it has been a U.S. government-designated “foreign terrorist organization” since 1997.

Hezbollah has engaged in deadly terrorism over decades against primarily U.S. and Israeli interests, killing hundreds of civilians and military personnel in attacks in Beirut, Saudi Arabia, Argentina, Bulgaria, and elsewhere.

The group’s abduction (and subsequent killing) of two Israeli soldiers in a cross-border raid in 2006 sparked a bloody month-long war. 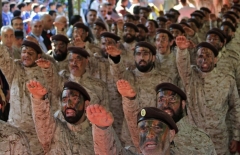 Iranian-sponsored Hezbollah fighters in the terrorist group’s stronghold of Baalbek. (Photo by -/AFP via Getty Images)

Hezbollah members or “supporters” have been implicated in murders inside Lebanon, including the car bombing assassination of former prime minister Rafik Hariri – blamed by a U.N.-backed tribunal on fighters from the terrorist group – and, just last month, the killing of an Irish U.N. peacekeeper whose UNIFIL convoy was ambushed in a Hezbollah stronghold.

Against that background, Wronecka’s tweet prompted hundreds of strong responses, ranging from incredulity to anger, from Israelis, Lebanese and Americans, among others.

“Is this real...??” asked Joshua Zarka, deputy director general and head of strategic affairs in Israel’s foreign ministry. “An official Senior UN Representative thanks the terrorist organization responsible for the murder of a UN peace keeper for ‘a tour d’horizon’!!! Have the world gone completely mad?!”

“Either the UN is a joke or Ms. Wronecka is,” tweeted Lebanese-born Foundation for Defense of Democracies research fellow Hussein Abdul-Hussain.

“Excuse me??” tweeted Joy Lahoud, a Lebanese lawyer and activist. “The UN is now thanking a terror group who just assassinated a UNIFIL young soldier last month!! How is a branch of IRGC now lecturing the international community on the issues of priority for Lebanon?? This world is gone mad.”

Many also wondered if Guterres’ special envoy had raised with the Hezbollah official two U.N. Security Council resolutions that his organization has been flagrantly violating for almost two decades.

Just two months ago, Wronecka briefed the Security Council on the status of implementation of resolution 1701.