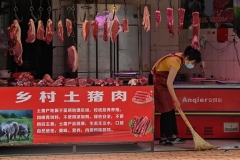 A vendor cleans her stall in a market in Wuhan, in Chinas central Hubei province on May 21, 2020. (Photo by HECTOR RETAMAL/AFP via Getty Images)

(CNSNews.com) – The Chinese government insisted Monday that it had alerted the world about the novel coronavirus outbreak in a timely manner, shrugging off the World Health Organization’s recent revision of its official timeline, showing that WHO first approached China about reports of a new mystery illness.

Foreign ministry spokesman Zhao Lijian said some U.S. politicians were “trying to frame China and the WHO for their own political agenda.”

“We urge them to respect facts and stop political maneuvering,” he told a briefing.

But the “facts” are not necessarily looking good for China, which under the International Health Regulations (IHRs) is required to notify WHO “within 24 hours” of any public health event that could have serious and international consequences.

The Trump administration has accused China of mishandling in its early stages the outbreak of a virus that spread across the globe, causing economic havoc and killing more than 537,000 people as of early Tuesday. It has also accused the WHO of being overly deferential towards Beijing, rather than pushing the Chinese to respond more quickly and effectively to the crisis.

Similarly, a WHO statement issued in early January stated that, “On 31 December 2019, the WHO China Country Office was informed of cases of pneumonia of unknown etiology (unknown cause) detected in Wuhan City.”

Although WHO did not say as much explicitly, taken together those statements were widely read to mean that Wuhan health authorities had reported the emerging outbreak on December 31 to WHO’s China office.

But at the end of April, WHO Director-General Tedros Adahnom told a briefing that a report on the cases in Wuhan had been first picked up, on December 31, by “WHO’s Epidemic Intelligence System.”

That account by Tedros did not align closely to WHO’s original timeline, but it was only last week that WHO amended it to make it clear that China had not reported the outbreak to WHO as it was obliged to do, but had only started to provide information after WHO requested it.

The amended timeline said that on Dec. 31, WHO picked up a media statement on the website of the Wuhan health authority, as well as a media report on an open-source website run by the Program for Monitoring Emerging Diseases (ProMED).

WHO amended its timeline after the Republican minority on the House Foreign Affairs Committee, led by ranking member Rep. Michael McCaul of Texas, released an interim report on the origins and initial handling of the COVID-19 pandemic.

Among its findings, that report noted that “the PRC [People’s Republic of China] never notified the WHO about the outbreak in Wuhan.”

Instead, WHO in Geneva had learned about the issue from the ProMED site, and requested the WHO China office to seek clarification from the Chinese government.

The GOP report also found that the Chinese government, as early as mid-December and by December 27 at the latest, had sufficient information to assess that it was legally obliged to inform the WHO, in line with the IHRs, about the emerging threat. Instead, it had sought to cover up the outbreak in the early stages.

(An academic paper by two dozen Chinese experts referred to a patient in Wuhan beginning to experience symptoms on December 1. One report, citing leaked Chinese government data, indicated that the first case had been detected as early as mid-November.) 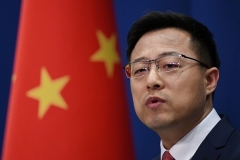 Asked at Monday’s briefing about the finding that China had “never notified the WHO about the outbreak,” Zhao called it “totally untrue.”

He said Wuhan health authorities had released a statement about the situation on December 31, and that “China reported to the WHO at the earliest time possible.”

As reported earlier, Chinese authorities eventually shut down Wuhan, a city of 11 million, on January 23. Before then, however, around five million people had left the city, traveling across China and beyond ahead of the lunar new year holiday.

The first coronavirus cases to be reported outside China, in at least 12 countries, including Japan, Thailand, and the United States, were all in patients who left Wuhan between January 6 and the lockdown on January 23.

“After months of investigating, it’s become crystal clear the Chinese Communist Party’s cover-up of the coronavirus, especially in the early days of the outbreak, played a significant role in turning what could have been a local epidemic into a global pandemic,” McCaul said when releasing the report.

The 11 Days in January When the People of Wuhan Weren’t Warned That the Virus Was Infectious (Apr. 2, 2020)

China Releases Timeline to Back Its Outbreak 'Transparency' Claim, But It’s Full of Holes (Apr. 7, 2020)