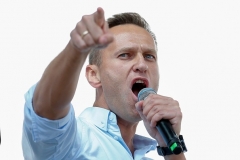 (CNSNews.com) – The suspected poisoning of one of Russian President Vladimir Putin’s foremost critics was “extraordinarily concerning,” U.S. National Security Adviser Robert O’Brien said on Thursday, warning that the incident could impact relations between the U.S. and Russia.

Alexei Navalny is unconscious in a Siberian hospital after falling gravely ill during a flight from Siberia to Moscow, which made an unscheduled landing in the city of Omsk.

An air ambulance arranged by a non-profit organization was dispatched from Germany to Omsk Thursday, with a plan to bring the 44-year-old to Berlin for urgent treatment.

Early on Friday, however, Kira Yarmysh, spokeswoman for the Anti-Corruption Foundation (FBK) which Navalny founded in 2011, said the Russian doctors were raising objections to releasing him for the flight to Germany.

Earlier Yarmysh said on Twitter it was suspected Navalny had been poisoned while drinking tea at an airport café before takeoff.

FBK legal department head Vyacheslav Gimadi said there was “no doubt” Navalny had been targeted for the political stances and activities.

Kremlin critics, including Navalny himself, have been targeted in similar suspicious incidents in the past.

In 2006 former Russian intelligence officer Alexander Litvinenko, also 44, died in a London hospital after being poisoned with radioactive polonium, administered in tea. A later British inquiry concluded that the Federal Security Service (FSB) assassinated him, in a plot that was “probably” approved by Putin.

In 2018 another former Russian spy, 66-year-old Sergei Skripal, survived an assassination attempt by suspected Russian operatives using a deadly nerve agent known as Novichok, in the English city of Salisbury. His daughter and a police officer affected by the substance also survived, although an unrelated woman died later after accidental exposure.

In an appearance on Fox News, O’Brien said the Navalny situation seemed similar to the Litvinenko case.

“It’s very concerning,” he said. “I want to first of all wish Navalny a very speedy recovery. I understand that he may be going to Germany tonight for medical care and we hope that that will result in his full recovery.”

O’Brien said the U.S. will have to “wait and see how this develops and we’ll have to get evidence as to what happened.”

“But it’s extraordinarily concerning, and if the Russians were behind this – as they were with Skripal or other incidents of the like, and there’ve been more than that in continental Europe – it’s something that we’re going to factor in to how we deal with the Russians going forward.”

Within weeks of the attempted murder of Skripal, the Trump administration expelled 60 Russian diplomats, all suspected spies, in solidarity with Britain.

The U.S. also imposed two rounds of sanctions against Russia, in August 2018 and again a year ago.  Moscow continues to deny any involvement in the affair.

Thorn in Putin’s side

German Chancellor Angela Merkel and French President Emmanuel Macron, speaking to reporters at a bilateral meeting in southern France on Thursday, both said their countries were prepared to offer Navalny medical assistance, and Macron said France could also offer asylum.

Merkel called for clarity on how Navalny had fallen ill.

“We certainly wish a speedy recovery to him, like to any other citizen of our country,” he said.

Navalny has been a persistent critic of Putin for many years.

He led opposition to Putin’s election campaign in 2012, but was later convicted of fraud and handed a five-year suspended prison sentence. He and his supporters said the charges were trumped up to punish him for challenging the president.

In 2017 the suspended sentence was extended for a further year, a setback that led to  Navalny’s disqualification from contesting the president election the following March. The State Department expressed concern about the decision to disqualify him, prompting the Russian foreign ministry to accuse the U.S. of meddling in Russia’s internal affairs.

Ahead of the March 2018 election Navalny called for street protests and a boycott. After Putin won another six-year term, Navalny was among more than 1,500 people arrested during protests ahead of the inauguration. He was sentenced to 30 days in prison.

In July last year, Navalny was arrested again, this time for calling for protests linked to the upcoming local government elections. Four days after he was arrested, he was admitted to hospital with a rash and severe facial swelling.

His doctor suspected the ailment was caused by contact with a “toxic agent” and Navalny said he had never suffered from an acute allergic reaction before.

In 2004, a Western-leading presidential candidate in Ukraine suffered dioxin poisoning while campaigning against a pro-Moscow rival, suffering severe facial pockmarking. Viktor Yushchenko, who won the election and served as president until 2010, said he believed he had been poisoned deliberately by political rivals.