WH Reaction to Chants of ‘Xi Jinping, Step Down’: ‘These Protesters Are Speaking For Themselves’ 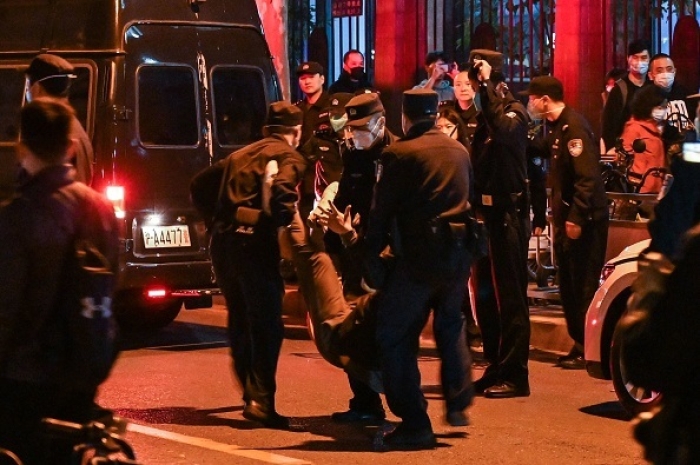 Police arrest a protestor during a demonstration on Sunday in Shanghai against China’s harsh COVID-19 restrictions. (Photo by Hector Retamal / AFP via Getty Images)

(CNSNews.com) – President Biden is “not going to speak for protesters around the world,” National Security Council coordinator for strategic communications John Kirby said on Monday when asked the president’s reaction to demonstrators in China chanting “Xi Jinping, step down.”

“What is the president’s reaction when he hears protesters in China chant ‘Freedom’ or ‘Xi Jinping, step down?’” a reporter asked Kirby during a White House briefing.

“The president’s not going to speak for protesters around the world,” Kirby replied. “They’re speaking for themselves.”

“So there’s no reaction?” the reporter asked.

“These protestors are speaking for themselves,” Kirby repeated. “What we are doing is making it clear that we support the right of peaceful protest.”

Protests by Chinese citizens angered by the restrictive “zero COVID” policy championed by Xi were sparked by a deadly fire last Thursday in an apartment building in Urumqi in western China, with reports claiming that pandemic restrictions had slowed down the emergency response.

The protests spread over the weekend to several major cities. Amid a heavy police presence and arrests of dozens of protestors, the situation appeared to have quietened down on Monday, in Beijing and Shanghai at least. In Hong Kong – where the CCP’s crackdown on democracy includes enforcement of anti-“subversion” legislation – small protests were reported. 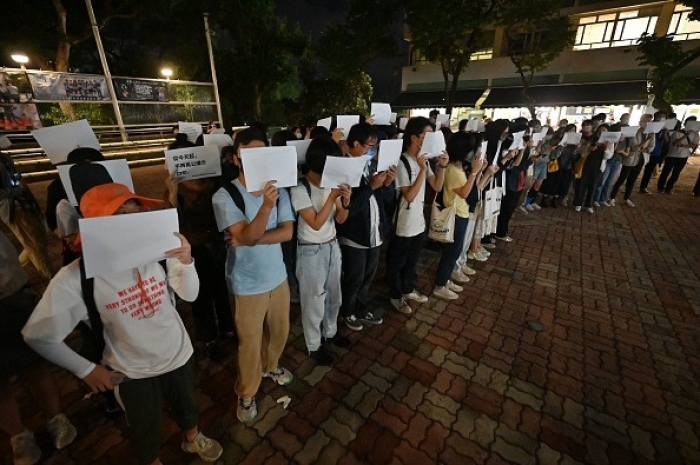 Students in Hong Kong take part in a protest on Monday in solidarity with those held in mainland China against the government’s ‘zero COVID’ policies. (Photo by Peter Parks / AFP via Getty Images)

Kirby fielded a number of questions at the briefing about the protests and the administration’s response.

“The president has explicitly drawn a contrast between autocracy and democracy here and also abroad,” a reporter noted. “Isn’t this a moment – obviously without getting into some sort of grand conflict – to sort of assert the rights of people advocating for freedom and democracy more forcefully than perhaps we have?”

“This is, I think, a moment to reassert what we believe in when it comes to free assembly and peaceful protest,” Kirby said. “And we have done that. We will continue to do that – whether it’s people protesting in Iran or China or anywhere else around the world.”

“Nothing’s changed about the president’s firm belief in the power of democracy and democratic institutions and how important that is,” he continued. “But this is really a moment – to put it back into your words – this is a moment for, you know, for the Chinese people and the Chinese government to speak to.”

“We have been nothing but clear and consistent and I think you’ll see that going forward.”

Chinese state media outlets are patently ignoring the protests, but at the foreign ministry in Beijing, spokesman Zhao Lijiang was asked about them.

“On social media, there are forces with ulterior motives that relate this fire [in Urumqi] with the local response to COVID-19,” Zhao was quoted as saying.

Asked about protestors calling on Xi to resign, Zhao said, “I’m not aware of the situation you mentioned.”

He also expressed confidence that government policies in response to the surge of COVID cases would be successful.

“We believe that with the leadership of the Chinese Communist Party and the cooperation and support of all Chinese people, our fight against COVID-19 will be successful.”

The questions and answers relating to COVID-19 and the protests were omitted when the foreign ministry’s English and Mandarin transcripts of the daily briefing were posted later in the day – evidently a reflection of the political sensitivity surrounding the issue, especially the unusual public anti-Xi sentiment.

Xi’s “zero COVID” strategy incorporates mandatory testing and snap, strictly enforced lockdowns affecting hundreds of millions of people, sometimes for months on end. Observers say the approach has kept the death rate in the pandemic exceptionally low – assuming official figures are credible – but at a punishing cost to China’s economy and society.

“A lockdown is not a policy that we support here,” Kirby said. “But obviously, there are people in China that – that have concerns about that. And they’re protesting that, and we believe they should be able to do that peacefully.”

In a statement responding to the authorities’ quelling of the protests, Sen. Ted Cruz (R-Texas) praised Chinese people protesting the government’s handling of the pandemic for “bravely standing up for their rights.”

“The Biden administration’s response has been worse than expected,” he said. “The CCP should know that one way or another, in the coming months or in the coming years, the United States will hold accountable each and every CCP official responsible for atrocities against these protesters.”

Cruz said the CCP, since the beginning of the coronavirus outbreak in Wuhan in late 2019, has “been desperate to cover up the origins, nature, and consequences of COVID-19. They lied and continue to lie to the world, and as a result millions of lives were lost and immense suffering was caused.”

“Our Select Committee on China will do what Biden refuses – finally reckon with the pariah that is the CCP.”

House Republicans have had a China Task Force since May 2020, chaired by the ranking Republican on the House Foreign Affairs Committee, Rep. Michael McCaul (R-Texas).  Last week McCarthy announced plans to establish a select committee on China, if he is Speaker in the next Congress.