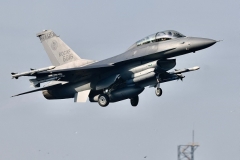 An armed U.S.-made F16 fighter jet of the Taiwanese Air Force takes off. (Photo by Sam Yeh/AFP via Getty Images)

(CNSNews.com) – Chinese warplanes operating in the skies near Taiwan in record numbers prompted a statement of concern from the State Department on Sunday, as a Chinese Communist Party media outlet hailed what it called “a clear and unmistakable declaration of China’s sovereignty over the island.”

Global Times in an editorial described Taiwan’s ruling Democratic Progressive Party (DPP) as “an evil force the mainland must crush.”

On Friday, 38 People’s Liberation Army Air Force (PLAAF) planes penetrated Taiwan’s air defense identification zone (ADIZ) southwest of the island, the largest number ever to have done so on a single day since Taiwan began publicly reporting tallies 13 months ago.

One day later, Beijing then set another new record, deploying 39 warplanes into the zone – 20 during the day and 19 during nighttime hours. An ADIZ extends beyond sovereign airspace, but aircraft entering it are usually expected to report their presence and flight plans to the authorities.

On Sunday, a further 16 incursions were reported by Taiwan’s defense ministry.

State Department spokesman Ned Price said the U.S. was “very concerned” about the “provocative” and “destabilizing” Chinese activity, saying in a statement that it “risks miscalculations, and undermines regional peace and stability.”

“We urge Beijing to cease its military, diplomatic, and economic pressure and coercion against Taiwan,” he said.

China views Taiwan, a de facto independent democracy of 23 million people, as a rebellious province that will be reincorporated into the CCP-ruled nation eventually – by force, if necessary.

The U.S. is committed under the 1979 Taiwan Relations Act to protecting Taiwan from unprovoked aggression, and to providing it with military aid – a commitment which the State Department said Sunday was “rock solid and contributes to the maintenance of peace and stability across the Taiwan Strait and within the region.”

“We will continue to stand with friends and allies to advance our shared prosperity, security, and values and deepen our ties with democratic Taiwan.”

Taiwan’s foreign ministry expressed “sincere appreciation” for the “strong remarks” from the State Department “in the face of China’s pressure and coercion.” 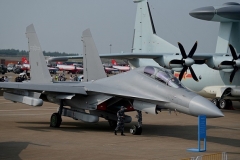 The China-Taiwan dispute dates back to the end of the civil war more than seven decades ago, but flares periodically, typically when Beijing reacts to actions by Taiwan or other countries which it views as inimical to its “one China” policy.

Over the past year China has stepped up its probing military activity across the 100-mile-wide Taiwan Strait, with PLAAF incursions into Taiwan’s ADIZ becoming almost daily occurrences.

“The PLA has done an excellent job!” it said, calling the air missions “a clear and unmistakable declaration of China's sovereignty over the island.”

“This is apt given the 72nd anniversary of the founding of the People’s Republic of China, greatly encouraging people nationwide, and highlighted and emphasized to a new height the special significance of the National Day,” it said.

It said the Chinese aircraft were “not a guard of honor. They are fighting forces aimed at actual combat.”

Their number and the fact that had been dispatched from various bases on the mainland demonstrated “the strong ability of the PLA to form a wartime air attack.”

Global Times accused the DPP of pushing the situation across the Taiwan Strait “to the brink.”

“They have constantly hyped up claims that they are at the forefront of the so-called democratic world to resist ‘authoritarian rule.’ They have thus turned themselves into a bloc that the Chinese mainland must get rid of strategically and an evil force the mainland must crush.”

The paper’s editor-in-chief, Hu Xijian, added in a tweet, “It is only a matter of time before Taiwan’s separatist authorities fall.”

Before this weekend’s events, the previous daily record of PLAAF sorties in the skies near Taiwan had been 28, recorded last June after the G7, for the first time in its history, included a direct reference to Taiwan in a summit communique.

Taiwanese authorities have reported more than 600 such sorties so far this year.

September accounted for a record-high 117 incursions, but with 93 now reported during just the first three days of October, this month looks likely to exceed that.