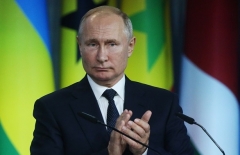 (CNSNews.com) – Unless ill health or other circumstance intervenes, President Vladimir Putin could if he chooses continue to lead Russia until 2036 under a law he signed on Monday. That would make him one of the world’s oldest heads of state by the time he leaves office.

Controversial changes to the constitution last year “reset” presidential term limits, meaning that once Putin’s current term ends in 2024, he would be eligible to run for two further six-year terms. (Presidential terms were extended in 2012 from four to six years.)

Putin would then have effectively ruled Russia, as president or executive prime minister, for a total of almost 36 years, from the age of 48 to the age of 83.

Of currently serving heads of state – excluding royalty or royal appointees – only Cameroon President Paul Biya, now 88, and Lebanese President Michel Aoun, 87, are older. (If President Biden ran for a second term and won, he would be 82 years and two months old on inauguration day in January 2025.)

The proposed constitutional changes were approved in a national referendum last summer, with 78.5 percent of voters purportedly backing them, while 21.4 percent were opposed. The exercise was tainted by reports of widespread irregularities and vote-rigging, with claims that as many as 22 million votes (of a total of 74 million) may have been fraudulent.

After the referendum, Putin signed an executive order to insert the amendments into the Russian constitution. The lower and upper legislatures last month then passed the legislation paving the way for the incumbent to hold onto power until 2036.

Putin has not yet said whether he will run when voters are next due to go to the polls to elect a president, in March 2024.

The former KGB foreign intelligence officer became prime minister under President Boris Yeltsin in August 1999, and acting president when Yeltsin abruptly resigned on the last day of that year. Putin won the presidential election held in March 2000, and took office in May.

He has been at the helm ever since. (When Dmitry Medvedev held the presidency in 2008-2012, he was largely seen as a handpicked, ceremonial placeholder while Putin as prime minister wielded actual power.)

Despite crackdowns on dissent, the curtailing of freedoms, the ongoing occupation of parts of Georgia and Ukraine, intervention in the Syrian civil war, election meddling, cyber attacks, and the poisoning of dissidents and critics, Putin’s approval rating since 2000 has only twice dropped below 60 percent in regular polling by the independent Levada Center – in April 2020, and again in May 2020. At its peak, approval hit 89 percent in June 2015, hovering just below that in the fall of 2008 and again in the fall of 2014.

The law signed by Putin on Monday limits Russian presidents from now on to two terms of six years each. To be eligible, a candidate must be a Russian citizen aged 35 or older, who has lived in Russia for no less than 25 years, and has never held any other nationality, or permanent residence status in any other country.