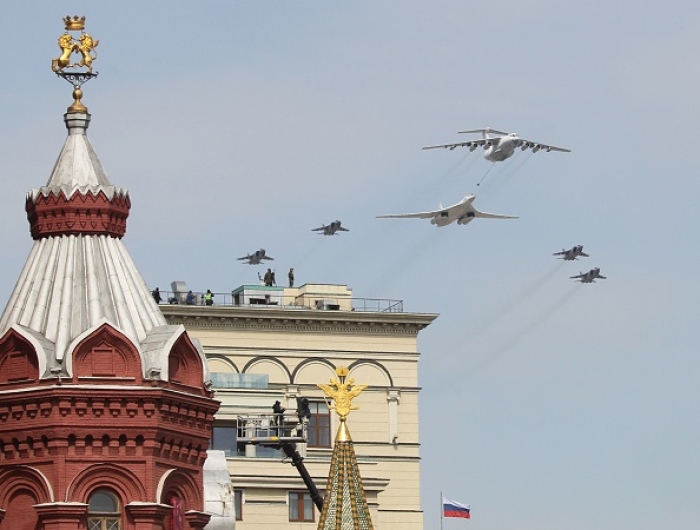 (CNSNews.com) – On the eve of a closely-watched “Victory Day” parade and speech by President Vladimir Putin, G7 leaders on Sunday agreed on a raft of tough new sanctions, in what a senior Biden administration official described as “a continuation of the systematic and methodical removal of Russia from the global financial and economic system.”

Among the more significant moves in an ongoing response to the invasion of Ukraine, the seven leading industrialized democracies pledged to phase out all imports of Russian oil, and targeted state-controlled television networks for sanctions.

The U.S. is restricting visas to thousands of additional Russian and Belarusian officials for human rights violations and atrocities in the war, and sanctioning senior executives from banks including Russia’s largest, Sberbank, as well as Gazprombank, the bank that facilitates Russian natural gas transactions.

Americans will also be banned from providing accounting, management consulting, and marketing services to Russian companies.

“We assured him of our full solidarity and support for Ukraine’s courageous defense of its sovereignty and territorial integrity, and its fight for a peaceful, prosperous and democratic future within its internationally recognized borders, with the liberties and freedoms that so many of us enjoy today,” the leader said in a joint statement.

The virtual meeting and statement invoked the anniversary of the defeat of the Nazis in World War II, commemorated in the West as Victory in Europe Day on May 8, and in Russia as Victory in the Great Patriotic War Day on May 9.

Honoring the victims and those killed fighting the Nazis, among Western allies and in the then-Soviet Union, the leaders said that Putin’s actions against Ukraine 77 years later “bring shame on Russia and the historic sacrifices of its people.”

“Through its invasion of and actions in Ukraine since 2014, Russia has violated the international rules-based order, particularly the U.N. Charter, conceived after the Second World War to spare successive generations from the scourge of war,” they said.

Putin has characterized his invasion of Ukraine as a “special military operation” to protect Russian-speakers in the east of the country from what he describes as a “neo-Nazi” regime in Kyiv.

Russian media outlets promoting that narrative and disseminating what the West says is disinformation around other issues – including atrocities committed against Ukrainian civilians and allegations of U.S.-backed biological warfare activities – are also being targeted by the G7.

Three directly or indirectly state-controlled television networks identified as playing a major propaganda role – Russia-1, Channel One, and NTV – are now under sanctions, and will no longer be able to rely on Western technology or advertising revenue.

“We’re not going to be in the business of helping them broadcast some of the lies and the deceit that you hear from Putin every day,” a senior administration official told reporters in a background briefing. 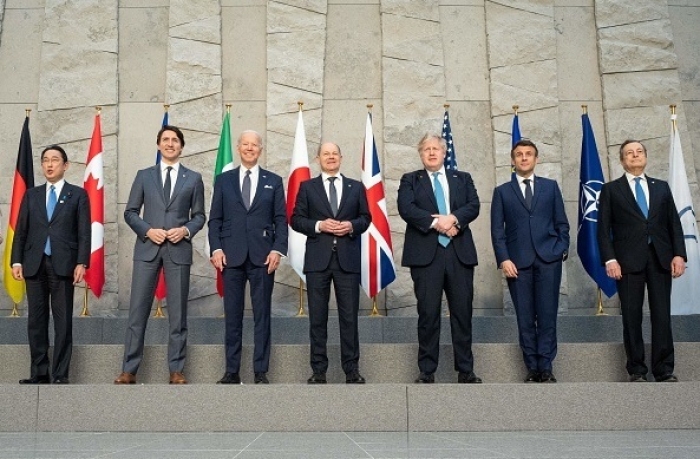 The U.S., Canada, and Britain have already announced bans on Russian oil, and the G7 leaders in their statement committed “to phase out our dependency on Russian energy, including by phasing out or banning the import of Russian oil.”

“We will ensure that we do so in a timely and orderly fashion, and in ways that provide time for the world to secure alternative supplies,” they said.

“No export is more important to Putin than oil; it’s the main artery of his economy,” the administration official said. “And the E.U. is now on the cusp of joining the U.S., Canada, and the U.K. in cutting off this trade.”

Sanctions were also announced on shipping companies and dozens of specified vessels used to ship military equipment, and on a leading weapon maker associated with the Russian government, Promtekhnologiya. New export control restrictions are being placed on industrial engines, bulldozers, motors, and chemicals.

Putin’s planned Victory Day speech on Monday has stoked much speculation, with some officials in the West predicting an important announcement – possibly a formal declaration of war on Ukraine, a mobilization of Russian reserves and that drafting of conscripts, or perhaps a declaration of “victory” in the invasion despite the stated goals clearly far from having been met.

In messages on Sunday to former Soviet republics, Putin congratulated them for the victory over Nazi Germany, and added that “it is a common duty today to prevent a restoration of Nazism that brought so much suffering to the people of various states.”

Putin had a special message for leaders of the so-called “people’s republics” of Donetsk and Luhansk in eastern Ukraine – which he recognized as “independent” in February in a prelude to the invasion.

According to the Kremlin, Putin said in his congratulatory messages to the two entities that “today our military personnel, like their ancestors, are fighting shoulder to shoulder for the liberation of their native land from Nazi filth and expressed confidence that, as in 1945, victory would be ours.”