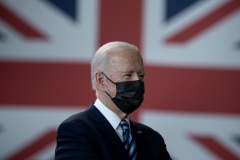 President Biden prepares to address U.S. Air Force personnel and their families stationed at RAF Mildenhall upon arrival in England on Wednesday evening. (Photo by Brendan Smialowski/AFP via Getty Images)

(CNSNews.com) – “Democracies are the countries that can best deliver solutions for people everywhere.”

Demonstrating that to the world is one of the incentives driving President Biden’s plan to make a major announcement this week regarding global coronavirus vaccine distribution, National Security Advisor Jake Sullivan said Wednesday.

The Washington Post reported that the administration is planning to share 500 million doses of the Pfizer vaccine with countries around the world, although Sullivan, briefing reporters on Air Force One as the president flew to Britain, said he did not want to get ahead of Biden, “who will be speaking to this issue tomorrow.”

The COVID-19 vaccination campaign will feature prominently at the first G7 summit in almost two years.

As he prepared to fly out of Joint Base Andrews earlier on Wednesday on his first presidential trip abroad, Biden was asked if he expects “to come out with a vaccine strategy for the world.”

“I have one and I’ll be announcing it,” he replied.

The host of the summit in Cornwall, British Prime Minister Boris Johnson, has said he wants the group of the world’s leading economies to commit to universal COVID-19 vaccination by the end of 2022.

Sullivan predicted that a G7 announcement would go beyond vaccines, laying out “a comprehensive plan to help end this pandemic as rapidly as possible.”

Earlier this week the administration announced the U.S. would share 80 million doses of its vaccine supply with other countries by the end of June.

China, the country where the outbreak first emerged in late 2019, has been touting its provision of China-made vaccines to countries around the world, prompting criticism about “vaccine diplomacy.”

Secretary of State Antony Blinken has pledged that U.S. vaccines would be provided to other countries “without any political strings attached,” although Sullivan acknowledged on Wednesday that a political incentive does exist.

“[Biden] does want to show, rallying the rest of the world’s democracies, that democracies are the countries that can best deliver solutions for people everywhere,” he said.

Still, Sullivan said Biden was firstly “focused on helping to vaccinate the world because believes it is the right thing to do; it’s what Americans do in times of need.”

It was also “the smart thing to do, because if variants continue to proliferate and get worse, ultimately one could break through,” he added. “And he wants to make sure we end the pandemic before that happens.”

Of the 80 million doses offered by the U.S. earlier this week, the bulk will go to the World Health Organization-led COVAX program, a financing instrument to help provide vaccines to low- and middle-income countries. It has a goal of providing two billion vaccine doses by the end of 2021, but the WHO has voiced concern that the target will not be met.

Others are going to neighbors Canada and Mexico, and to other countries hit by recent surges of infections, including India and South Korea. (One million doses of the Johnson & Johnson vaccine were en route to South Korea even before the administration’s announcement. Some 28,500 U.S. troops are stationed there, working alongside local forces.)

Although the commitment of 80 million doses (and its earlier pledge of $4 billion to COVAX) makes the U.S. the biggest vaccine donor to date, the need is huge; fewer than six percent of the world’s 7.9 billion people have been fully vaccinated to date, according to Our World in Data statistics.

By comparison, the numbers for poorer nations are very small – 0.04 percent in Niger, 0.03 percent in Zambia, 0.01 percent in Uganda, for example.

Scientists estimate that up to 90 percent of populations will need to be vaccinated to reach the threshold of collective immunity, although experts do differ on the issue, and many uncertainties about the novel coronavirus remain.

“We have to end COVID-19, not just at home – which we’re doing – but everywhere,” Biden said in remarks to U.S. Air Force personnel at the Royal Air Force Mildenhall airbase in England upon arrival on Wednesday evening.

‘There’s no wall high enough to keep us safe from this pandemic or the next biological threat we face – and there will be others,” he said. “It requires coordinated, multilateral action.”