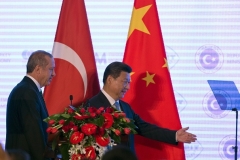 (CNSNews.com) – Uyghur activists expressed concern on Tuesday that Beijing’s ratification of an extradition treaty with Turkey could put in jeopardy those who have sought a safe haven there after fleeing repressive Chinese Communist Party policies in Xinjiang province.

China’s National People’s Congress at the weekend formally approved the treaty, first signed in 2017, and state media said it would help Beijing to counter “terrorism.”

The CCP characterizes its widely-condemned security policies in the far-western province as necessary and effective measures to combat terrorism, extremism, and separatism. More than one million Uyghur and other minority Muslims are reported to have been held in re-education camps in the region since 2017.

Turkey’s parliament has yet to ratify the extradition treaty, but the World Uyghur Congress (WUC) voice alarm at the consequences it could have once put into place.

Uyghurs, an ethnic Turkic Muslim group, exercised autonomy in the region the call East Turkistan for periods during the 1930s and 40s, before their homeland came under communist Chinese rule in 1949. Turkey, which has ethno-linguistic and historic links to the Uyghurs, is home to the largest exiled Uyghur community outside of Central Asia, an estimated 50,000-strong.

The human rights research group Nordic Monitor in a 2019 analysis of the draft treaty said it could allow the extradition to China of Uyghurs wanted for acts that constitute offenses in China but are viewed differently under Turkish law.

The WUC urged the Turkish government not to ratify the treaty, saying it would likely “become another instrument of persecution for China, aiding the Chinese government in its coordinated efforts to forcibly return Uyghurs living abroad.”

“After Uyghurs flee China, the Chinese government relentlessly pursues Uyghur refugees and uses its power and influence to pressure host countries into returning Uyghur refugees and asylum seekers,” it said, adding that more than 300 such cases have been confirmed over the last two decades – a number that does not include those secretly returned to China.

“Upon their return, Uyghurs are subjected to enforced disappearances, arbitrary detention, torture, and other serious human rights violations.”

“Turkey is considered to be a second home for Uyghurs, who have taken refuge in this country that has cultural and linguistic ties with the Uyghur people,” said WUC president Dolkun Isa. “Given the genocide that is unfolding in East Turkistan, the Turkish government has a responsibility to protect all Uyghurs living in Turkey.”

Despite its close links to the situation and people in Xinjiang, Turkey’s response to China’s policies there has been largely uncritical.

Although the Turkish foreign ministry in February 2019 called the internment camp situation “a great shame for humanity,” five months later President Recep Tayyip Erdogan was cited by Chinese state media as saying during a visit that Uyghurs were “leading a happy life amid China’s development and prosperity” – echoing a sentiment often stated by Beijing. Neither Turkey’s state news agency nor Erdogan’s office contested that, or made any reference to the plight of the Uyghurs in their report on his official visit to Beijing.

At an Organization of Islamic Cooperation (OIC) mini-summit in Malaysia last December, when a Turkish audience member asked a question about “the tragedy suffered by the Uyghurs,” there was no response from either Erdogan or two other leaders on the platform, Malaysian Prime Minister Mahathir Mohamad and Iranian President Hassan Rouhani.

Unlike several dozen other OIC members, Turkey has not signed up to periodic statements at the U.N. praising China’s policies in Xinjiang. At the same time, however, it has not joined statements by democracies deploring those same policies.

China consistently rejects the reports of mass atrocities and criticism, especially from the United States. On Monday, foreign ministry spokesman Zhao Lijian did so again, telling a media briefing that U.S. critics were “neglecting truth, making fabrications, and time and again spreading disinformation about Xinjiang.”

“Disinformation on Xinjiang fabricated by some American politicians is the biggest ‘lie of the century,’” he said, evidently a barbed response to Secretary of State Mike Pompeo’s description of the atrocities as the “stain of the century.”

“Xinjiang enjoys social stability, economic growth, ethnic solidarity, harmony among religions and better livelihoods, and people of all ethnic groups including Uyghurs are living a life of happiness, tranquility and peace,” Zhao said. “By contrast, there's systemic racial discrimination and police brutality in the U.S. judicial and law enforcement systems.”