US Tells WHO It Doesn’t Like its Position on Abortion, Either 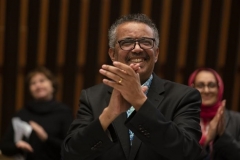 (CNSNews.com) – Hours after President Trump warned the World Health Organization that U.S. funding and membership were on the line, the U.S. on Tuesday rejected language in a WHO resolution because of concerns about promoting abortion.

At the WHO’s virtual World Health Assembly (WHA), the U.S. delegation said in a statement it was dissociating itself from two paragraphs in a broader resolution on the coronavirus pandemic, because of language used by some to assert an international right to abortion.

“We do not accept references to ‘sexual and reproductive health,’ or other language that suggests or explicitly states that access to abortion is included in the provision of population and individual level health services,” the statement said.

It said the U.S. “believes in legal protections for the unborn,” and that it rejects any interpretation of international human rights that requires a country to provide access to abortion.

“Each nation has the sovereign right to implement related programs and activities consistent with their laws and policies, free from external pressure,” the statement said. “There is no international right to abortion, nor is there any duty on the part of states to finance or facilitate abortion.”

The statement added that the U.S. does not recognize abortion as a method of family planning, and does not support abortion in its global health assistance.

The two paragraphs both refer to “sexual and reproductive health.”

The first calls on member-states, as they respond to the coronavirus pandemic, to maintain the continued functioning of the health system in all relevant areas, among them “the uninterrupted and safe provision” of health services including “sexual and reproductive health.”

The second calls on member-states to provide assistance on request to others needing help in carrying out those health services, including in the area of “sexual and reproductive health.”

The phrase covers access to abortion. A recent WHO document on healthcare during the pandemic states, “Women’s choices and rights to sexual and reproductive health care should be respected irrespective of COVID-19 status, including access to contraception and safe abortion to the full extent of the law.”

Republican administrations in the U.S. have long resisted efforts to insert phrases like “reproductive health and rights” into international documents including U.N. General Assembly resolutions, usually without success.

Once included in such documents, the terms are often cited by advocacy groups as they seek to pressurize governments, especially in developing countries, to amend or throw out laws limiting abortion.

Addressing the General Assembly last September, President Trump criticized U.N. projects which he said “have attempted to assert a global right to taxpayer-funded abortion on demand.”

“Global bureaucrats have absolutely no business attacking the sovereignty of nations that wish to protect innocent life,” Trump told the gathering. “Like many nations here today we in America believe that every child born and unborn is a sacred gift from God.”

Having dissociated itself from the two paragraphs in the WHA resolution, the U.S. did not stand in the way of a consensus adoption of the broader resolution, which among other things calls for an independent and comprehensive review into the coronavirus pandemic and WHO’s response.

The U.S. delegation welcomed that, and in its statement applauded the mandate that the resolution gives to WHO to “investigate the origins of the virus.”

It also endorsed a call in the text for all member-states to notify WHO quickly and thoroughly about information relating to the pandemic, as required under the International Health Regulations (IHRs).

And the U.S. called for changes to be made within WHO, to hold member-states “accountable” for honoring their IHR obligations. In his warning letter to WHO on Monday, Trump noted pointedly that China had not met its IHR obligation to notify WHO “within 24 hours” about any public health event that could have serious and international consequences.

According to WHO, the IHRs are not legally enforceable. Instead, it says countries are expected to comply with them because failure to do so would lead to problems that could include unilateral travel restrictions, “public outrage,” a “tarnished” reputation, and a higher death rate.

This year’s virtual WHA was adjourned after just two days, and is due to reconvene later in the year. Among the decisions taken was one postponing until then proposals to allow Taiwan’s participation as an observer. The U.S. is leading an effort supporting Taiwan’s bid, which is firmly opposed by China.

“The PRC’s spiteful action to silence Taiwan exposes the emptiness of its claims to want transparency and international cooperation to fight the pandemic, and makes the difference between China and Taiwan ever more stark,” Secretary of State Mike Pompeo said in a statement Tuesday, using an acronym for the communist People’s Republic of China.

“Taiwan is a model world citizen, while the PRC continues to withhold vital information about the virus and its origins, deny access to their scientists and relevant facilities, censor discussion of the pandemic within China and on Chinese social media properties, and casts blame widely and recklessly,” he said.