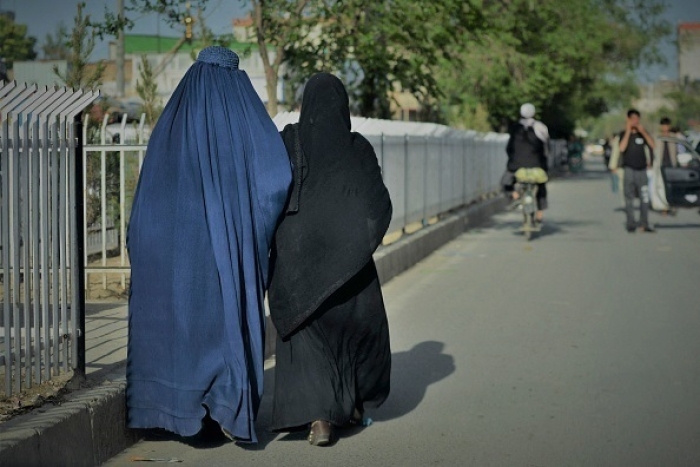 Afghan women in a Kabul street on Saturday, May 7, 2022. (Photo by Ahmad Sahel Arman/AFP via Getty Images)

(CNSNews.com) – The Taliban’s weekend decree ordering women to cover themselves from head to toe in public – and not to leave home unless necessary – is drawing widespread condemnation, but the move was foreseeable, given the group’s unchanged adherence to its distinctive interpretation of shari’a.

The edict is the most far reaching yet in a series of restrictions imposed on half of Afghanistan’s population by the Islamic fundamentalist group that seized power last summer, coming after its earlier decision not to allow girls above grade six to return to school.

The Biden administration, European Union, and United Nations were among those expressing outrage at the latest announcement, although there has been no evidence that condemnation of the schooling decision in March had any impact.

Still, State Department spokesman Ned Price said on Monday the international community does have “leverage, including incentives and disincentives” that could be used if the Taliban does not reverse course.

“Our contention was always that the United States, when – especially when we’re acting with partners around the world, we have sources of leverage to wield with the Taliban,” he told a briefing.

Price referred to the Taliban making good “on the promises that they have made.”

U.N. Secretary General Antonio Guterres similarly spoke of the Taliban keeping its “promises,” and in its reaction, the U.N. Assistance Mission in Afghanistan (UNAMA) cited “assurances” received from the Taliban, both before and after its August 2021 takeover, “that women would be afforded their rights, whether in work, education, or society at large.”

When Kabul fell to the Taliban last summer, it made vague declarations that it would not return to the restrictions enforced on women when its previously ruled most of Afghanistan, from 1996 to late 2001. (The State Department back then described the Taliban’s restrictions on women as “widespread, institutionally sanctioned, and systematic.”)

The newly returned Taliban would respect women’s rights, spokesman Zabihullah Mujahid said at the group’s first news conference in the capital, “within the limits of Islam.”

“Our women are Muslims, they accept Islamic rules,” he said. “If they continue to live according to shari’a, we will be happy, they will be happy.” 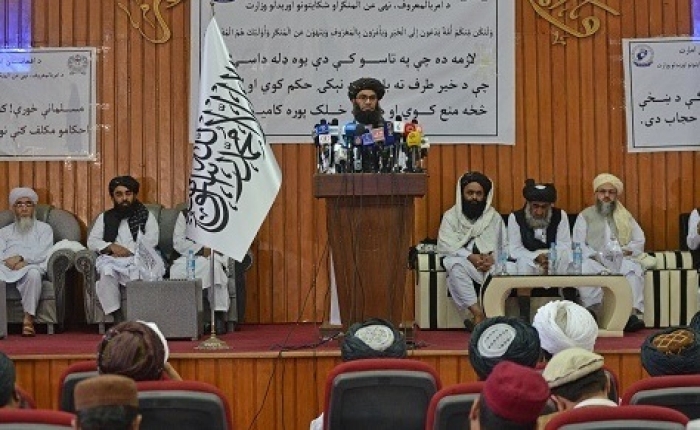 Taliban minister for promotion of virtue and prevention of vice Mohammad Khalid Hanafi speaks during the dresscode announcement on Saturday. (Photo by Ahmad Sahel Arman/AFP via Getty Images)

Just weeks earlier, as the terrorist group swept through the country’s provinces, it said in a statement it rejects “non-Islamic forms of governance.”

“Everything from politics, economics, culture and education to social life must be follow our religious values,” it said. “This is because Afghans do not desire the elimination of military aggression alone, but also the termination of western political, cultural and ideological invasion.”

Once in power, the Taliban appointed an all-male cabinet, reverted the ministry of women’s affairs into a “ministry for the promotion of virtue and prevention of vice,” and banned women from most employment. (The International Labour Organization reported early this year that more than 500,000 Afghan workers lost their jobs since the Taliban takeover, with women especially badly affected.)

It reneged on a supposed pledge to reopen secondary schools for girls, and announced that women may not travel on domestic or international flights unless accompanied by a male “guardian.”

The dress code decree from the Taliban’s reclusive leader Hibaitullah Akhunzada was unveiled at a Saturday press conference in Kabul by the minister of virtue and vice, Mohammad Khalid Hanafi, the TOLO news agency reported.

It places on male “guardians” the responsibility for ensuring that women in their households comply, on pain of punishment for men who fail to do so.

“If a woman doesn’t wear a hijab, first, her house will be located and her guardian will be advised and warned,” said virtue and vice ministry spokesman Akif Mahajar, reading from the decree.

“Hijab” commonly refers to a head covering for Muslim women, but it is also the term for the religious code that governs modest attire for women in Islam (“observing hijab”).

The Taliban ministry recommended Afghan women wear the burqa – the shroud-like full body covering that allows only the eyes to be seen – “as it is part of Afghan culture.”

It also said that women should not leave home unless it is necessary, calling it one of the best ways of “observing hijab.”