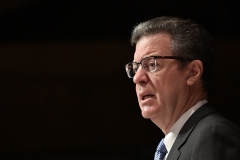 (CNSNews.com) – The Chinese government is responsible for “one of the worst religious persecution situations in the world today, if not the worst,” U.S. Ambassador-at-Large for International Religious Freedom Sam Brownback said this week, urging the Chinese Communist Party to end its “war on faith.”

He pointed to mass incarceration and mass surveillance of minority Muslim Uyghurs in Xinjiang province, but also to the authorities’ treatment of Tibetan Buddhists, Protestant house churches, Roman Catholics, and Falun Gong adherents.

“They are persecuting all faiths,” Brownback told reporters in a briefing after participating in a meeting of the International Religious Freedom or Belief Alliance, a Trump administration initiative spearheaded by Secretary of State Mike Pompeo.

The meeting, hosted this time by the Polish government and held virtually, brought together foreign or deputy foreign ministers from the expanding membership of the alliance, including Pompeo.

One of the issues discussed during the two-day event was the CCP’s use of new technologies to control Uyghurs. 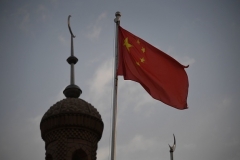 He announced plans for an “effort to really push back on the use of technology to create these virtual police states to persecute religious adherence. And this is something they’ve done in Tibet, they are doing in Xinjiang, and rolling out in different places in their country. And we want to stop this from spreading to other countries around the world or spreading more to other countries around the world.”

Brownback was asked about the recent decision by the U.S. government to lift the terror designation of a Uyghur separatist group, whose existence Beijing routinely points to in seeking to justify its policies in Xinjiang.

“If the Chinese weren’t at war with faith, they would have a more open society, but they’d also have a more satisfied citizenry that seeks to practice their faith and be left alone and left in peace.”

Responding to the criticism, a spokesman for China’s Embassy in Poland said some of the forum participants, including Pompeo, had “openly attacked and slandered religious freedom in China by bending the facts and turning white into black, to which we expressly object.”

“The population of all ethnic groups in China legally enjoys full freedom of religion and belief,” the spokesman said, adding that the country more than 5,000 registered religious organizations, almost 200 million followers of various religions, more than 380,000 clergy, and 14,000 registered places of worship.

Accusing the U.S. of having a “truly worrisome” religious situation – and referencing polls in which American Muslims say their community faces discrimination – Zhao said countries like the U.S. should “look in the mirror and examine themselves and stop using religious issues to interfere in the internal affairs of other countries.”

“We also advise the countries concerned not to be exploited by the United States and used as its chess pieces.”

(Zhao also complained about Taiwan’s participation in the event, and urged “relevant countries” to refrain from “making any form of official contact with the Taiwan authorities.”)

When he hosted a landmark religious freedom ministerial in Washington in the summer of  2019, Pompeo accused Beijing of having put pressure on some countries to boycott that meeting, praising those that had “defied the Chinese pressure to come here.”

And when he hosted the launch of the alliance at the State Department last February, he again mentioned Chinese efforts to stymie the initiative, telling participants, “We know several of you courageously pushed back against Chinese pressure by agreeing to be part of this alliance, and we thank you for that.”

Other issues discussed at this week’s event, according to Brownback, included concerns that some governments were using the coronavirus pandemic as a pretext for additional persecution, a push for an end to laws outlawing blasphemy and apostasy, efforts to protect religious sites in conflict zones, and calls to protect endangered Christian minorities in the Middle East.