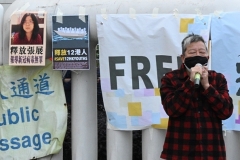 A Hong Kong pro-democracy activist, Lee Cheuk-Yan, protests on Monday against the jailing of Hong Kong activists and Zhang Zhan, whose image appears in a poster behind him. (Photo by Peter Parks/AFP via Getty Images)

(CNSNews.com) – Zhang Zhan, the first person known to have been tried and convicted for unauthorized coverage of the coronavirus outbreak in Wuhan, is reported to be close to death in a Shanghai prison, and the State Department is calling again for her immediate release.

After posting video reports from the outbreak epicenter on social media in February 2020, Zhang was arrested in May, and sentenced last December to four years’ imprisonment for “picking quarrels and provoking trouble.”

Supporters of the 38-year-old former lawyer see her as a victim of a concerted campaign by the Chinese Communist Party (CCP) to oversee the outflow of information from Wuhan and control the narrative.

Zhang was held incommunicado for several months with no official reason provided, and after going on intermittent hunger strikes to protest her incarceration, she was reportedly shackled and force-fed.

Her brother, Zhang Ju, tweeted late last month that her weight had dropped to below 40 kilograms (88 pounds), and she “may not live long.”

Price said the U.S. and other diplomatic missions in Beijing had “repeatedly expressed our serious concerns about the arbitrary nature of her detention and her mistreatment during it.”

“We reiterate our call to the PRC for her immediate and unconditional release and for Beijing to respect a free press and the right of people to express themselves freely.”

During her visit to Wuhan, Zhang uploaded video clips of interviews with Wuhan residents, footage of city streets, public places, and health facilities, and commentaries about how the city was dealing with the COVID-19 crisis. At the time the CCP was enforcing strict media controls.

According to Reporters Without Borders, her widely-shared reporting became “one of the main sources of independent information about the health situation in Wuhan at the time.” (The press watchdog has named Zhang as a nominee for its “prize for courage” in its 2021 Press Freedom Awards, to be awarded next week.)

The Network of Chinese Human Rights Defenders says the indictment eventually lodged against Zhang accused her of having “sent a large amount of false information” on WeChat, Twitter, and YouTube, and of having “maliciously stirred up the Wuhan epidemic situation” during interviews with foreign media outlets.

After her conviction and sentence, the Trump State Department said Zhang had been punished “for challenging CCP propaganda and highlighting the Chinese government’s mismanagement of the COVID-19 outbreak in Wuhan.”

Then-Secretary of State Mike Pompeo said the CCP “has shown once again it will do whatever it takes to silence those who question the party’s official line, even regarding crucial public health information.”

The CCP paper Global Times characterized Zhang as a “tool” of Western forces wanting to bash China and its response to the pandemic.

“[H]er ‘reports’ did not state facts; they were full of unconfirmed rumors and blame,” a writer for China Daily, another CCP organ, opined early this year. “They end up belittling China’s anti-epidemic efforts. It is her reports blaming the government that encouraged Western politicians to vent their ideological bias against China.”

In its 2020 annual report on human rights the State Department said Zhang was one of four “citizen journalists” targeted by authorities in Wuhan.

Apart from the attempts to silence independent voices, CCP officials had earlier reprimanded doctors who had expressed concern about the outbreak in December 2019.

One of them, Dr. Li Wenliang of Wuhan Central Hospital, was chastised for spreading “rumors”  and “false comments” online, before dying of the virus in February 2020

Chinese officials are accused of continuing to cover up the outbreak in its early stages.

At the beginning of January 2020 Chinese scientists quickly decoded the genome of the novel coronavirus, but the sequence was only published on January 12. On January 3, China’s National Health Commission ordered institutions not to publish any information related to the virus, telling labs to transfer any samples they had to designated testing institutions, or to destroy them.

Only on January 20 did a leading Chinese epidemiologist acknowledge on state television that the virus was spreading between humans.

By the time authorities shut down Wuhan on January 23, five million people had left the city ahead of the lunar new year holiday. The first COVID-19 cases to be reported outside China, in at least 12 countries, including Thailand, Japan, and the United States, were all individuals who had Wuhan between January 6 and the lockdown on January 23.

Beijing insists it was transparent and cooperated with the international scientific and health community throughout, but in reality it delayed efforts to investigate through 2020. It took 240 days from the time the World Health Organization in May 2020 mandated an international probe into the zoonotic origins of the virus until the team was allowed to land in Wuhan last January.

Since last summer, China has refused to cooperate with follow-on investigations, which plan among things to further probe key laboratories in Wuhan to test the hypothesis that the virus may have accidentally leaked from one of them.

More than 5.06 million deaths worldwide have been attributed to the coronavirus since it first emerged in Wuhan in late 2019.