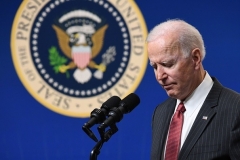 President Biden speaks about the situation in Burma, at the Eisenhower Executive Office Building in Washington on Wednesday, Feb. 10, 2021. (Photo by Saul Loeb/AFP via Getty Images)

(CNSNews.com) – The Biden State Department has spoken repeatedly in recent weeks about the high priority it’s giving to consultation with “allies and partners” around the world and the need for coordinated action, but on one of the most pressing foreign policy issues of the day, there is little sign the U.S. and its closest allies are acting in concert, beyond the issuing of joint statements.

In responding to the coup in Burma, the U.S., acting virtually alone, has announced economic sanctions against the military. Regional allies, however, are nowhere near that kind of response. Thailand, a U.S. treaty ally which shares a long border with Burma, says the coup is its neighbor’s internal affair, while the Philippines, also a treaty ally, is taking a similar approach.

Other Southeast Asian partners are generally calling for restraint and discussions between the parties. Burma is a member of the Association of Southeast Asian Nations, but the group operates on a strict principle of “non-interference” in each other’s affairs.

South Korea and Japan, U.S. allies with considerable interests in Burma, have called for a return to democracy but a senior Japanese defense official also voiced concern that Western sanctions could push Burma closer to China.

The response from Washington’s European allies has also been tempered. European Union foreign policy chief Josep Borrell spoke in the European Parliament on Thursday about the need to act swiftly in response to the coup – but also said the E.U. would await political guidance from a meeting of the bloc’s foreign ministers, in 11 days’ time.

The most robust response from any country other than the U.S. was a decision by New Zealand to suspend diplomatic ties with Burma.

President Biden on Thursday announced sanctions targeting the Burmese military, leaders and business interests over the February 1 coup, along with other measures including export restrictions on the defense ministry and other entities associated with the seizure of power.

“Together with allies, partners, and international organizations, we will stand with the people of Burma as they reaffirm their support for democracy through peaceful protest,” the White House said in a fact sheet. “The United States will continue to work with our allies, partners, and international organizations as we condemn the actions of the Burmese military, and call for the immediate restoration of democracy.”

“The United States’ close coordination with allies, partners, and like-minded institutions at every level has resulted in consistent and strong messages on the coup as an affront to the Burmese people,” it said, pointing to recent G7 and U.N. Security Council statements in support of democracy in Burma. (In the latter case, the response came in the form of a “press statement,” the weakest option available to the U.N.’s top decision-making body, short of saying nothing.)

A day earlier, State Department spokesman Ned Price had said that, “working with our closest partners, our like-minded partners around the world, we can have the most impact, we can impose the most substantial costs on those who are responsible for this coup.”

Price has repeatedly talked up the importance of consulting with allies and partners on major foreign policy issues, including Burma, Iran, China, Russia, and Venezuela, describing the alliances and partnerships as “force multipliers” across a range of challenges.

“Whether it is restoring democracy in Burma, whether it is holding Russia to account, whether it is competing and ultimately out-competing with the Chinese, everything we do will be more effective if we are to bring our allies and partners along with us,” he said last week. “And that’s precisely what we’re doing.”

Price has spoken about the issue so often that in one briefing he apologized for going on about it: “I’m sorry if I’m repeating myself, but it’s going to be a constant refrain of our foreign policy.”

“We do have quite a bit of leverage,” he said again early this week in relation to the Burma crisis. “But as with every challenge, we have all the more leverage when we work closely with our allies and partners, including in this case with our like-minded allies and partners.”

“The United States remains the most powerful country in the world. There is no doubt about that, but when we bring our allies and partners along with us, they act as force multipliers. We have the ability to galvanize collective action to confront challenges the world over in a way that no other country does.”

Asked on Wednesday why U.S. sanctions on Burma’s military were not being “rolled out” in coordination with allies and partners, he indicated that action by others would be forthcoming.

“We have heard from some of our partners what they are working on, what they will be able to present,” he said. “I think as you hear from us in this week and as you hear more from our partners, it will be very clear that what we are collectively rolling out will impose steep and profound costs on those responsible for this coup.”

Meanwhile in responding to Russia’s treatment of the anti-Putin campaign Alexey Navalny – first poisoned, then imprisoned – the U.S. and its E.U. allies again do not appear to be working in close alignment right now.

The E.U., stung by Russia’s swatting away of its protests, has signaled that it’s considering imposing fresh sanctions against Moscow. But the Biden administration is conducting a review of a range of “malign” Russian actions.

Asked earlier this week about the review, Price said the administration was “moving expeditiously and with alacrity,” although he added that he “wouldn’t want to put a timeframe on it.”

Asked on Thursday whether the U.S. and E.U. were discussing the question of sanctions relating to Navalny, Psaki pointed again to the ongoing review, saying, “we’ll wait for it to conclude before making any policy announcements.”

“Of course, the president reserves the right to respond in any manner and any timeline of his choosing,” she said. “But that review is ongoing and has not concluded yet.”