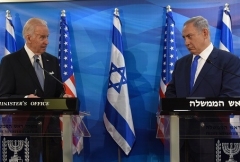 (Update: President Biden spoke by phone to Israeli Prime Minister Binyamin Netanyahu on Wednesday. A White House readout said, “The President affirmed his personal history of steadfast commitment to Israel’s security and conveyed his intent to strengthen all aspects of the U.S.-Israel partnership, including our strong defense cooperation. Together, the leaders discussed the importance of continued close consultation on regional security issues, including Iran. The President emphasized U.S. support for the recent normalization of relations between Israel and countries in the Arab and Muslim world. He underscored the importance of working to advance peace throughout the region, including between Israelis and Palestinians. Together, they affirmed their shared interest in continued strategic cooperation to confront the many challenges facing the region.”)

(CNSNews.com) – The fact that President Joe Biden has still not spoken since his inauguration to Israel Prime Minister Binyamin Netanyahu continues to raise eyebrows, but White House press secretary Jen Psaki said on Tuesday that he would be the first leader in the Middle East to receive such a call, and “soon.”

While Biden has yet to speak to the leader of the U.S.’s firmest ally in the region – and one of the closest anywhere – he has had calls with the leaders of two deeply antagonistic regimes – Russian President Vladimir Putin on January 26, and Chinese President Xi Jinping, on February 10.

Netanyahu, whose relationship with President Trump was a warm one, is known to be wary of Biden’s plans to re-engage Iran, and his offer to re-enter the Obama-era nuclear deal if Tehran returns to compliance.

After playing down the issue in recent weeks, Psaki said at Tuesday’s White House briefing that Biden’s “first call with a leader in the region will be with Prime Minister Netanyahu.”

Psaki described Israel as “an ally” and “a country where we have an important strategic security relationship.”

But the absence of a call from Biden is making waves.  (The two did speak during the transition period, on November 17.)

Last week Israeli ambassador to the U.N. Danny Danon in a pointed tweet listed world leaders Biden has spoken to since his inauguration, and asked, “Might it now be time to call the leader of #Israel, the closest ally of the #US?” He included the phone number for Netanyahu’s office.

Asked about the issue the following day, Psaki said Biden “looks forward to speaking with” Netanyahu – “obviously somebody that he has a longstanding relationship with.”

On Friday, she was asked again, and told by a reporter that “there’s a narrative in Israel that this is an intentional diss.”

“It is not an intentional diss,” Psaki replied. “Prime Minister Netanyahu is someone the president has known for some time. Obviously, we have a long and important relationship with Israel, and the president has known him and has been working on a range of issues that there's a mutual commitment to for some time. It is just a reflection of the fact that we have been here for three and a half weeks, he’s not called every single global leader yet, and he is eager to do that in the weeks ahead.”

“But he has called every other major ally in Europe and in Asia,” the reporter suggested.

“He’s called many of them, that is true,” Psaki conceded. “Some would argue they haven't received calls yet, and they are still eager to receive them. But I can assure you he will be speaking with the prime minister soon, and he's looking forward to doing that.”

Also on Friday, Sen. Rick Scott (R-Fla.) joined those who have raised concern about the issue, saying, “President Biden’s failure to call Prime Minister Netanyahu is unacceptable and sends a deeply troubling message on the priorities of the United States under his administration.”

“Israel is an important partner in trade and we have no greater ally than Israel in our efforts to ensure peace in the Middle East, and around the world,” Scott said. “It is unbelievable that President Biden would call Communist China’s General Secretary Xi, a dictator and adversary, before connecting with our ally, Israel. The call should happen today.”

Netanyahu told Israel’s Channel 12 at the weekend that while he and Biden have differences over Iran and approaches to the Palestinian issue, “we also have many things we agree on and the alliance is very strong.”  He voiced confidence that Biden would call.

Still, the length of time taken does appear to be a departure from the norm.

President Trump spoke to Netanyahu one day after his inauguration, and President Clinton spoke to Prime Minister Yitzhak Rabin within three days of Clinton taking office.

Presidents George W. Bush and Obama were both inaugurated in the final three weeks of Israeli election campaigns, but Bush phoned Prime Minister Ariel Sharon on February 6, the day the Israeli won the election, and Obama called Netanyahu on April 1, the day after the prime minister was sworn in.

Israelis go to the polls again next month – for the fourth time in two years – but election day falls two months and two days after Biden took office.