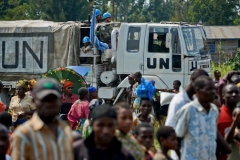 (CNSNews.com) – The Trump administration’s refugee policies led to an increased proportion of Christians among those resettled in the United States – but because overall refugee numbers were reduced so significantly, far fewer followers of the world’s most persecuted religious faith were resettled during the Trump years than previously, advocates told the U.S. Commission on International Religious Freedom on Wednesday.

Between fiscal year 2016 and fiscal year 2020, the number of refugees admitted to the U.S. from the 50 countries on the Open Doors USA annual list of the world’s worst persecutors of Christians dropped by 83 percent – from 16,714 to 2,811 – Jenny Yang, senior vice president of advocacy and policy at World Relief, told a USCIRF hearing on “Refugees Fleeing Religious Persecution.”

(The annual Open Doors watchlist, described as “countries where it is most dangerous to follow Jesus” is dominated by Islamic countries. Since 2005 at least half, and as many as nine, of the ten worst countries listed each year were Islamic. On this year’s list, the top ten are North Korea, Afghanistan, Somalia, Libya, Pakistan, Eritrea, Yemen, Iran, Nigeria, and India, Six of the ten are Islamic states, and in a seventh, Nigeria, Muslims account for about 53 percent of the population.) 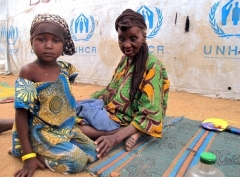 Nigerians who have fled fighting between the army and Boko Haram terrorists shelter at a UNHCR camp on the Nigeria-Cameroon border. (Photo by Reinnier Kaze/AFP via Getty Images)

President Biden is expected to increase the admission ceiling for the current fiscal year, to around 62,500 (adjusting the record-low 15,000 cap set by President Trump last fall) and has also announced a ceiling of 125,000 admissions for the next fiscal year, the highest in three decades. The move has been applauded by refugee resettlement agencies, and by the USCIRF, a bipartisan statutory body that advises the executive and legislative branches.

Given the state of religious persecution worldwide, and especially persecution targeting Christians, Yazidis and other minorities in the Middle East, some Republican lawmakers during the Obama era pressed for non-Muslim minorities to be prioritized among applicants for refugee status. Obama declined to do so, rejecting what he said would amount to a “religious test” in the refugee admission process.

During most of the Obama administration, Christians outnumbered Muslims – although not by large margins – among the refugee admissions.

That changed in the last full fiscal year of the Obama administration, when 44.5 percent of the 84,994 refugees resettled in the U.S. were Christians and 45.7 percent were Muslims.

Over the following three years, the ratio shifted markedly the other way again, even as the overall admission numbers dropped:

“Under President Trump, the percentage of refugees resettled to the United States who were Christian soared from 44 percent in 2016 to 79 percent in 2019,” noted Mark Hetfield, president and CEO of the Hebrew Immigrant Aid Society, and a former USCIRF staffer.

“But the actual number of Christians resettled to the United States plummeted over 36 percent, from 37,521 to 23,754,” he said. “I mention this to underscore that the best way to help more refugees who have fled religious persecution is to help more refugees, not to replace one form of discrimination with another.”

The FY 2020 refugee admissions program introduced a new category of prioritized admissions, for refugees “who have been persecuted or have a well-founded fear of persecution on account of religion,” or to those falling in a category listed in the Lautenberg Amendment – which granted priority status to Soviet Jews, Vietnamese nationals and others minorities seeking refuge – and its 2004 extension, which covers persecuted religious minorities in Iran.

On Tuesday, a bipartisan group of 12 senators reintroduced a bill designed to make it easier for “Hong Kongers who participated peacefully in the protest movement [under Beijing’s national security laws and policies] and have a well-founded fear of persecution” to obtain U.S. refugee status.