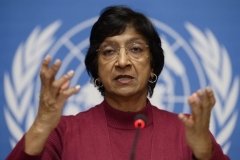 (CNSNews.com) – The Human Rights Council has appointed to lead what is arguably its most controversial investigation yet – with Israel in its crosshairs – an individual who is on the record as calling Israel an “apartheid state,” backing the campaign to boycott and sanction Israel, and signing statements lobbying governments to punish the Jewish state.

Yet despite the submission by a Geneva-based non-governmental organization of a 30-page document backing its assertion that Navi Pillay is not fit to head the HRC’s first ever open-ended investigation targeting one country, the council’s president on Wednesday defended the choice.

HRC president Federico Villegas said in response to queries that the council head, when selecting members of investigative bodies, “places the utmost importance on examining the independence and impartiality of each member in order to ensure the objectivity of the body.”

Villegas, the ambassador of Argentina, said further that now that the Commission of Inquiry (CoI) has been established, it “deserves the full respect and cooperation of all council stakeholders.”

Whether the CoI or its members deserve that “full respect and cooperation” is up for debate, however.

The HRC established the CoI last May after 11 days of hostilities between rocket-firing terrorists in Gaza and the Israeli military. It aims to probe alleged violations of international humanitarian and human rights law, prioritizing the gathering of evidence that could lead to legal action.

It is the first inquiry in the HRC’s 16-year history to have an open-ended, rather than time-limited mandate. The Biden administration, which rejoined the HRC this year, has spoken out against it, and some U.S. lawmakers want the administration to prioritize its shutdown.

The selection of Pillay to head the three-person inquiry, critics say, removes further any veneer of impartiality.

Pillay, a South African jurist, served as the U.N. high commissioner for human rights from 2008-2014.

Both during her U.N. tenure and over the years since, she has regularly taken stances strongly critical towards Israel. In its legal brief submitted to the HRC on Monday, U.N. Watch detailed these positions, and requested that Pillay recuse herself. 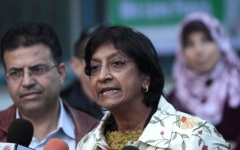 U.N. Watch Executive Director Hillel Neuer voiced regret Wednesday at the response from Villegas, saying in an email that it “fails to address the compelling evidence in UN Watch’s complaint of how Navi Pillay has been actively campaigning against Israel, signing letters to President Biden urging him to end Israeli ‘oppression,’ and signing boycott appeals that call to ‘Sanction Apartheid Israel!’”

“Anyone who takes a moment to see what Navi Pillay has said and endorsed in her lobbying campaigns against Israel, and then reads what her U.N. panel is charged to investigate, will see immediately that Pillay’s continued membership on the commission of inquiry is a mockery of the principles of impartiality, and a travesty of justice,” he said.

The examples laid out in the brief are numerous, and include Pillay’s depictions of Israel as an “apartheid state” – including in public comments, interviews, and lectures, and her signing of a 2020 petition to “Sanction Apartheid Israel,” in protest against the Trump Mideast peace initiative.

Pillay was high commissioner when in 2010 Israeli commandos raided a Turkish ship carrying pro-Palestinian activists to Hamas-ruled Gaza. In ensuing clashes nine Turkish activists, some of whom were members of a group designated by the U.S. government two years earlier for funding Hamas, were killed.

“Never in her U.N. tenure did Pillay use such inflammatory language regarding any other country – not even against serial abusers such as China, Russia, Iran, Syria or North Korea,” said Neuer, whose group has been monitoring the U.N. human rights apparatus in Geneva for almost three decades.

‘Astonishing, absurd, and a travesty of justice’

Pillay has also defended the HRC’s “agenda item seven” – under which Israel is the only country, out of 193 U.N. member-states, to be targeted by a permanent agenda item during council sessions.

The skewed focus on Israel has been slammed by numerous Western governments – several of whom now boycott meetings held under agenda item seven – and also by former U.N. secretary general Ban ki-Moon, who said in 2007 he was “disappointed at the council’s decision to single out only one specific regional item given the range and scope of allegations of human rights violations throughout the world.”

Pillay, by contrast, justified agenda item seven during a 2010 visit to Kuwait, and in a discussion with Italian lawmakers that same year.

Israel has been the target of more condemnatory HRC resolutions than any other country, well more than twice as many as those focusing on abuses in Syria, Burma, and North Korea. (Not a single HRC resolution has criticized the human rights records of China, Russia, Cuba, or many other countries with poor records.)

At a press conference in Jerusalem in 2011, however, Pillay stated that the council “has not singled out Israel, contrary to media reports.”

Two weeks earlier, Ban ki-Moon had told the HRC that “it cannot be a place that targets some countries, yet ignores others. It cannot be a place where some members overlook the human rights violations of others so as to avoid scrutiny themselves.”

The 2020 “Sanction Apartheid Israel” petition she signed calls on governments to ban the “arms trade and military-security cooperation with Israel” and to suspend free-trade agreements with Israel.

It also urges governments to adopt a U.N. resolution to implement “targeted and lawful sanctions on Israel, including a military embargo,” and to support the International Criminal Court’s probe into Israeli “war crimes” and “crimes against humanity.”

“She is an active anti-Israel lobbyist who has been made chair of this inquiry,” Neuer said of Pillay. “It is astonishing, absurd, and a travesty of justice.”

U.N. Watch has launched a petition urging Secretary of State Antony Blinken to take action to have Pillay removed.

Villegas’ full statement in response to queries about Pillay’s appointment:

“When selecting members of investigative bodies, the president of the Human Rights Council places the utmost importance on examining the independence and impartiality of each member in order to ensure the objectivity of the body.  Additionally, the president places special emphasis on the qualifications, skills, expertise and experience of the candidates when making his/her appointment.

“While there were differing views during the negotiations and voting on the resolution that created the Independent International Commission of Inquiry on the occupied Palestinian territory, including East Jerusalem, and Israel, once the council adopted that resolution the commission became a mechanism of the council that deserves the full respect and cooperation of all council stakeholders.”