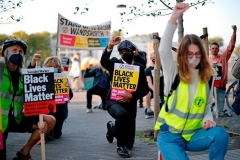 (CNSNews.com) – A British government-mandated report into racial disparities in the country has attracted the ire of a race-focused working group at the United Nations, who reject findings that do not neatly align with the dogma that racism is systemic and institutional in Britain.

The U.N. experts charged on Monday that the report attempts to “normalize white supremacy.”

Controversially, the group that compiled the 230-page report, the Commission on Race and Ethnic Disparities, found (in the words of a foreward to the report, by the commission’s chair) that “geography, family influence, socio-economic background, culture and religion have more significant impact on life chances than the existence of racism.”

“That said, we take the reality of racism seriously and we do not deny that it is a real force in the U.K.” it added – a line that drew considerably less attention as critics slammed the report.

The Commission on Race and Ethnic Disparities (CRED) was set up in response to the Black Lives Matter protests last summer. Of the 11 individuals on the commission 10, are from ethnic minority backgrounds. They include the chair, educator Tony Sewell, whose parents moved from Jamaica to Britain in the 1950s.

Sewell wrote in the foreward that while the commission did find “some evidence of biases” as it engaged with witnesses in the policing, education, health and mental health services, it was often “a perception that the wider society could not be trusted.”

“For some groups historic experience of racism still haunts the present and there was a reluctance to acknowledge that the U.K. had become open and fairer.”

The report also looked at data showing success among some minority communities in contrast to others, and found, when examining issues of educational failure and crime, that “family breakdown” was “one of the main reasons for poor outcomes.” (At the same time, “Family is also the foundation stone of success for many ethnic minorities.”)

The report criticized what it saw as the imprecise use of language, with reference to the “repeated use and misapplication of the term ‘racism’ to account for every observed disparity.”

“This matters because the more things are explained as a result of racial bias, the more it appears that society is set against ethnic minorities, which in turn can discourage ethnic minority individuals from pursuing their goals.”

“If more precise language does not become a feature of our national conversation on race, we can expect to see tensions increase across communities – despite determined action by government and civil society to reduce discrimination.”

The term “institutional racism,” the report said, “is now being liberally used, and often to describe any circumstances in which differences in outcomes between racial and ethnic groups exist in an institution, without evidence to support such claims.”

“The Commission therefore feels that misapplying the term racism has diluted its credibility, and thus undermined the seriousness of racism, where it does exist, in contemporary Britain. Where ‘institutional racism’ is used too casually as an explanatory tool, it can also lead to insufficient consideration of other factors which are also known to drive such differences in outcomes.”

In a strong-worded statement, the U.N. experts urged the British government to “categorically reject the findings of the report,” and to disband or reconstitute CRED.

“The report cites dubious evidence to make claims that rationalize white supremacy by using the familiar arguments that have always justified racial hierarchy,” they wrote. “This attempt to normalize white supremacy despite considerable research and evidence of institutional racism is an unfortunate sidestepping of the opportunity to acknowledge the atrocities of the past and the contributions of all in order to move forward.”

The letter was written by the five-person “U.N. working group of experts on people of African descent,” and was endorsed by a sixth expert, Tendayi Achiume, who holds the title of “special rapporteur on contemporary forms of racism, racial discrimination, xenophobia and related intolerance.”

(Achiume, a Zambian-born UCLA School of Law professor, recently told U.S. lawmakers that the U.S. was “not exempt” from international obligations to eliminate racial discrimination by making reparations for slavery.)

The U.N. experts took issue with the fact that the British report had not acknowledged their own analysis and reports highlighting “the damaging impact of institutional racism and deep-rooted inequities in areas such as health, education, employment, housing, stop-and-search practices, and the criminal justice system in the U.K.”

They also accused the report of disparaging “complex analyses of race and ethnicity,” of offering “shocking misstatements and/or misunderstandings” about data collection and research,” and of trying to “delegitimize data grounded in lived experience while also shifting the blame for the impacts of racism to the people most impacted by it.”

British Prime Minister Boris Johnson’s spokesman on Monday rejected the U.N. criticism, saying in the government’s view, it “misrepresents the findings” of the commission’s report.

“We remain proud of the U.K.’s long history as a human rights champion and we encourage everyone to read the original report in full,” the spokesman said. “This report in no way condones racist behavior and in fact it highlights racism and inequality are still problems for our country.”

Since its release three weeks ago, the CRED report has drawn fire from left-wing lawmakers, equality activists and trade unionists in Britain. In response, the commission said earlier that some of the criticism “has tipped into misrepresentation,” which risks undermining the report’s purpose – to understand and address the causes of inequality in the U.K.

The commission also responded to the personal nature of some of the attacks aimed at it by some politicians and public figures: “Robust debate we welcome. But to depict us as racism deniers, slavery apologists or worse is unacceptable.”