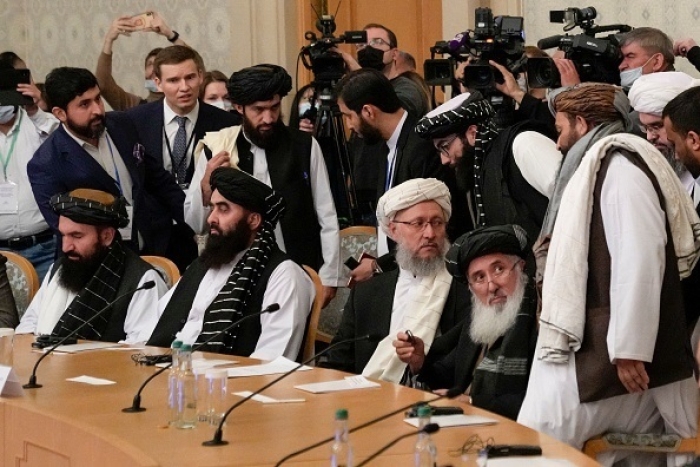 (CNSNews.com) – Three months after the Taliban reneged on a promise to allow Afghan girls above grade six to return to school, the U.N. Security Council has retaliated – by removing two education officials from a list of Taliban officials exempted from a U.N. travel ban.

However, 13 other Taliban leaders had their waiver extended for at least another two months, allowing them to continue traveling despite the ban instituted in 1999.

The Security Council had to decide this week whether or not to extend waivers for more than a dozen leaders of the terrorist group, a concession first made in 2019 in a bid to facilitate peace negotiations.

Those peace negotiations infamously failed, and the Taliban seized power violently last summer. But the waivers have remained in force, allowing those individuals to continue to travel abroad “for participation in peace and stability discussions in a range of countries.”

As the June 20 date for a Security Council decision neared, human rights groups and representatives of Afghanistan’s former elected government urged it to use the leverage offered by the exemptions to force a change of behavior by the Islamist group, particularly its treatment of women and girls.

In line with its interpretation of Islam, the Taliban last March refused to allow secondary school girls back into the classrooms, and last month issued a decree ordering women to cover themselves from head to toe in public, and not to leave home unless necessary.

“It’s time for governments to turn consensus that the Taliban’s actions are unlawful into coordinated actions that show the Taliban that the world is ready to defend the rights of Afghans, particularly women and girls, in meaningful ways,” Heather Barr, associate director of Human Rights Watch’s women’s rights division, argued earlier this month.

She suggested renewing the travel ban on those leaders implicated in serious rights violations.

In response to the council’s decision, Barr commented on Tuesday, “Better than nothing, but nowhere near the display of solidarity Afghans deserve.”

“We’re seeing a clear indication of the world’s politicians’ level of commitment to gender equality as we watch them respond to the Taliban’s wholesale smash up of women’s rights,” she said. “The response is lukewarm at best. That should be scary for all of us.”

State Department spokesman Ned Price portrayed the decision as an unambiguous response to the Taliban’s actions.

“These [two] individuals who are responsible for the Taliban’s education policy are no longer exempted from the inability of senior Taliban officials to travel beyond Afghanistan’s borders,” he said during a briefing.

“We proposed that the Security Council take this step to signal to the Taliban in no uncertain terms that its decision to prohibit girls from obtaining secondary education has consequences, including very practical consequences like this.”

Last month the Security Council in a statement urged the Taliban to “swiftly reverse the policies and practices which are currently restricting the human rights and fundamental freedoms of Afghan women and girls” and to “adhere to their commitments to reopen schools for all female students without further delay.”

Last week the U.N. High Commissioner for Human Rights Michelle Bachelet told the Human Rights Council in Geneva that the people living in Taliban-ruled Afghanistan were “experiencing some of the darkest moments of a generation.”

Citing the ban on secondary schooling for girls, the strictly enforced dress code, barriers to employment and severe restrictions of women’s freedom of movement, she said, “what we are witnessing today in Afghanistan is the institutionalized, systematic oppression of women.”

“Over the past ten months, the international community has been using every possible means to engage with the Taliban, but it appears to have become a dead end, filled with broken promises and deep disappointments,” he said.

“The violent extremist group has removed, decree by decree, every fundamental right and liberty of the citizens of Afghanistan. Women cannot participate in political life and are not represented in the government. Women have become invisible in public life.”

Andisha was appointed by the government toppled by the Taliban last year, but he continues to hold the Afghanistan seat in Geneva. As the Taliban regime remains unrecognized it has not been allowed to take control of the missions to the U.N., either in Geneva or New York.

For months after the Taliban takeover, Andisha’s counterpart in New York, Ambassador Ghulam Isaczai, urged the world body to keep the pressure on the Taliban – to little visible effect.

Last fall he called on the Security Council to end the travel ban exemptions, on the grounds the Taliban had “failed to resolve the conflict through peaceful means.”

“The council must use all its diplomatic tools, including the full implementation of existing multilateral sanctions, to make the Taliban engage in sincere and genuine talks for a comprehensive settlement,” he said at the time.

See also:
US, Partners Will Use 'Leverage' in Response to Taliban's Strict Dress Code Decree (May 10, 2022)