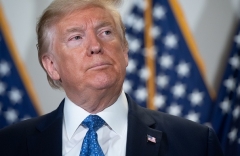 Although both instances feature a bright blue exclamation mark and a link to an “events” page where the issue is explored further, the difference in the way Twitter treated the two cases goes beyond that fact that almost 11 weeks passed before cautions were added to the Chinese official’s tweets.

In the case of Trump’s tweets, a user who clicks on the “Get the facts about mail-in ballots” link is taken to an “events” page headlined, “Trump makes unsubstantiated claim that mail-in ballots will lead to voter fraud.”

Following that, there are links to various media outlets’ stories challenging Trump’s claims, along with a “What you need to know” section compiled by Twitter staff.

On the same page, Twitter explains that it added labels to two Trump tweets “as part of our efforts to enforce our civic integrity policy. We believe those Tweets could confuse voters about what they need to do to receive a ballot and participate in the election process.”

“We also wanted to provide additional context and conversation with regard to voter fraud and mail-in ballots. We have a range of remediations, and in some cases we add labels that link to more context.”

In mid-March, Chinese foreign ministry spokesman Zhao Lijian in a tweet encouraged readers to “read and retweet” an article insinuating that U.S. military personnel who took part in the 109-nation World Military Games in Wuhan last fall had introduced the coronavirus into the Chinese city where the outbreak emerged.

The article, from a website notorious for disseminating conspiracy theories, also sought to link the outbreak with the temporary closure last summer of the U.S. Army Medical Research Institute of Infectious Diseases, in Fort Detrick, Md.

“This article is very much important to each and every one of us,” Zhao commented. “Please read and retweet it. COVID-19: Further Evidence that the Virus Originated in the US.”

In another tweet the same day, Zhao said, “It might be US army who brought the epidemic to Wuhan. Be transparent! Make public your data! US owe us an explanation!”

Coming from a Chinese foreign ministry official, the astonishing suggestion that the U.S. military may have been responsible for the pandemic that has cost so many lives and upended economies across the globe prompted no “fact check” labels from Twitter for more than two months.

That changed just this week, and evidently only after the New York Post challenged the social media company over an alleged “double standard,” comparing the Trump and Zhao tweets.

Now, those Zhao tweets carry a Twitter exclamation mark and warning, “Get the facts about COVID-19.”

Clicking on the link that also takes users to an “events” page, but unlike the Trump case, in this instance the headline on the landing page does not relate directly to Zhao’s claims.

Rather than, say, heading the page “Chinese foreign ministry official makes unsubstantiated claim that U.S. military was responsible for COVID-19 in Wuhan,” the headline provided by Twitter reads, “WHO says evidence suggests COVID-19 originated in animals and was not produced in a lab.”

Then follow news stories and tweets about the World Health Organization disputing suggestions that the virus originated in a lab in Wuhan. Those stories and tweets were posted in April, that is, more than a month after Zhao’s tweets, and do not relate specifically to the theories that he promoted.

Only once having scrolled beyond those stories and tweets does a user reach a section that reads, “Chinese officials and news outlets have shared unsubstantiated theories that a US lab was the source of the virus.”

Unlike in the case of the Trump tweets, Twitter does not offer a “What you need to know” section disputing the conspiracy claims. It also provides no justification or explanation for the warning label.

“Back in March, a Chinese official began spreading a conspiracy theory on Twitter, an egregious one, that our U.S. military was responsible for the spread of the coronavirus,” she said.

“And that tweet, that disinformation, it took all the way until today when we raised concerns about it to get a fact-check.”

In response to the controversy over his labeled tweets, Trump on Thursday issued an executive order aimed at limiting legal immunity granted to social media companies against liability for content created by their users and posted on their platforms.

Twitter chief executive Jack Dorsey tweeted earlier that the platform will “continue to point out incorrect or disputed information about elections globally. And we will admit to and own any mistakes we make.”

“This does not make us an ‘arbiter of truth.’ Our intention is to connect the dots of conflicting statements and show the information in dispute so people can judge for themselves,” Dorsey said. “More transparency from us is critical so folks can clearly see the why behind our actions.”

The ‘arbiter of truth’ reference was likely a response to a statement by Facebook CEO Mark Zuckerberg, who said in an interview with Fox News’ Dana Perino: “We have a different policy, I think, than Twitter on this. I just believe strongly that Facebook shouldn’t be the arbiter of truth of everything that people say online.”