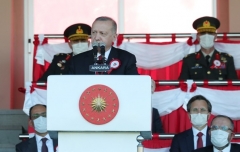 (CNSNews.com) – Turkish President Recep Tayyip Erdogan on Sunday delivered a menacing warning to countries challenging Turkish energy claims in the Mediterranean, asking the people of Greece and France if they are ready to pay the price for their “overambitious and incompetent leaders.”

A day earlier, his foreign minister reminded Greece of a 15-year-old Turkish parliamentary resolution stating that Turkey would regard any unilateral move by Greece to extend its territorial waters eastwards as a “casus belli,” or justification for an act of war.

The heightened rhetoric from the Islamist government in Ankara comes amid fruitless attempts by Germany to mediate between Greece and Turkey, purported NATO allies with a long history of animosity between them.

Greece and its ally Cyprus are locked in a long running dispute with Turkey over oil and gas exploration in disputed waters, a row linked to competing views on the limits of their continental shelves and exclusive economic zones. Turkey has angered Greece by sending a survey vessel to the disputed area, accompanied by navy ships.

France has thrown its support behind fellow European Union members Greece and Cyprus, sending a warship and fighter jets to hold joint drills with them in the eastern Mediterranean.

French President Emmanuel Macron told reporters on Friday that he had laid down “red lines” in the region because Turkey – which he accused of violating E.U. members’ sovereignty – respects actions, not words.

Turkey, meanwhile, has begun its own naval maneuvers in the area north of Cyprus, including “shooting exercises” that it says will run through September 11.

Erdogan made his comments Sunday while addressing graduates at a military university. He warned that “all who will confront us on land, at sea and in the air” should be aware of Turkey’s determination to defend its rights and interests.

“I wonder if those who stand against us in the Mediterranean and its vicinity can afford the same sacrifices” as Turkey is ready to make, he asked.

He threw in a similar question about unnamed countries in the Gulf – a barb possibly directed at the United Arab Emirates, which recently also sent warplanes to Greece for joint exercises.

“Are the citizens of the countries which have designs on Turkey’s democracy, rights and regional interest from thousands of kilometers away, aware of the loss this process will cause to them?” he asked. 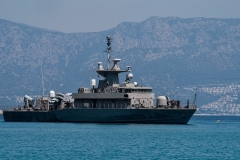 Amid rising tensions between Greece and Turkeey, a Greek Navy vessel lies off the small Greek island of Kastellorizo, situated less than two miles off the Turkish coast, on Friday. (Photo by Louisa Gouliamaki/AFP via Getty Images)

Greece recently announced it was extending its territorial waters to its west – towards Italy – to 12 nautical miles, something it is entitled to do under the U.N. Convention on the Law of the Sea (UNCLOS), in consultation with Italy.

Although that particular move did not affect Turkey, Greek Prime Minister Kyriakos Mitsotakis told lawmakers last week Greece may in future extend its territorial waters in other directions too.

That prompted Turkish Foreign Minister Mevlut Cavusoglu to remind Greece of the 1995 Turkish “casus belli” parliamentary resolution. (Under Greece and Italy, Turkey is not a party to UNCLOS.)

In a broadcast interview, Cavusoglu also said the Turkish research vessel currently surveying in the eastern Mediterranean, the Oruc Reis, would now continue its mission for 90 days.

It’s the latest, and largest, extension to the mission, which began on August 10. Turkey earlier said the Oruc Reis would conduct exploration until August 23, then August 27, then September 1.

Macron’s “red lines” remark angered the Turkish foreign ministry, which said in a statement, “Those who think they drew a red line in the eastern Mediterranean are challenging our country’s resolute stance.”

“The period of determining their imperialist understanding by drawing lines on maps is over,” it added, in an apparent dig at France’s colonial past.

Last Thursday a meeting of E.U. foreign ministers warned Turkey it could face sanctions over the dispute, although the bloc’s foreign policy chief Josep Borrell, while urging Turkey to “refrain from unilateral actions,” also called for dialogue.

Borrell and Cavusoglu discussed the simmering tensions in a phone call on Sunday.