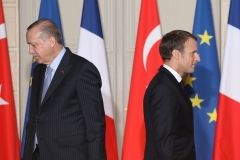 (CNSNews.com) – Fifteen years after interfaith relations were rocked by the publication in European newspapers of cartoons satirizing Mohammed, the controversy has reared its head again, with mudslinging, boycott calls, and deadly violence.

The decapitation in France of a school teacher who used a cartoon in a classroom lesson left the country reeling, and the issue is also straining relations between France and its purported NATO ally Turkey, whose Islamist president is positioning himself again at the forefront of the Muslim reaction to perceived Islamophobia in Europe.

The Mohammed cartoon saga first erupted in 2005 when a Danish paper published several images depicting Islam’s 7th century founder, provoking anger in many Muslim nations. They were subsequently reproduced by other outlets, including the French satirical magazine Charlie Hebdo – known for lampooning political, religious and other figures – which in 2011 and 2012 went on to publish its own irreverent sketches.

Depicting images of Mohammed is regarded as blasphemous by many – although evidently not all – Muslims. France is home to the biggest Muslim community in the European Union.

In 2015, terrorists attacked Charlie Hebdo’s offices, killing 12 people. Early last month 14 French citizens went on trial in Paris accused of aiding the attackers, and to mark the development the magazine republished the earlier cartoons, including one drawn by its own cartoonist who was among those killed in the 2015 attack.

After French teacher Samuel Paty featured one or more of the sketches in a lesson about freedom of speech, a Chechen-origin refugee sought him out and killed him. Police shot dead the killer, and seven others have been charged with links to the attack.

Two weeks before the grisly murder, President Emmanuel Macron in an October 2 speech had outlined plans to implement measures aimed at countering Islamist radicalism at home, describing Islam “a religion that is in crisis all over the world.” Turkish imams at French mosques would likely be affected by the proposals, should they become law.

Macron also has defended the right to publish or display the cartoons.

The developments fueled ill will between two governments already divided over the civil war in Libya, naval tensions in the Mediterranean linked to Turkey’s gas exploration efforts, and Turkish President Recep Tayyip Erdogan’s military incursion into Syria a year ago.

The row deepened at the weekend when Erdogan in a speech suggested that Macron needed a mental health examination because of his views on Islam. The following day, Erdogan piled on, saying that “the person in charge of France has lost his way.”

France in response recalled its ambassador from Ankara for consultations, with Foreign Minister Jean-Yves Le Drian charging that Turkish authorities had failed to condemn Paty’s murder, but were now promoting “hateful and slanderous propaganda against France.”

He highlighted in particular “direct insults against the president of the French Republic, expressed from the highest level of the Turkish state.”

“This conduct is unacceptable, especially from an allied nation,” Le Drian said.

A defiant Erdogan on Monday called on Turks to boycott French products, and said in a speech that E.U. leaders must put an end to Macron’s “anti-Islam” agenda.

Boycotts of French goods have already been called in several Arab states, including Qatar, Kuwait, and Jordan, and Pakistan’s parliament unanimously passed a resolution demanding that the government recall its ambassador from Paris and urge all Organization of Islamic Cooperation member-states to boycott French products.

The Iranian regime also waded in, with Foreign Minister Javad Zarif tweeting, “Muslims are the primary victims of the ‘cult of hatred’ – empowered by colonial regimes & exported by their own clients.”

The French newspaper Le Monde attributed Erdogan’s anger to “his frustration with the bill being prepared in Paris on Islamist separatism, which should deprive Turkey of its main lever over Islam in France, that of Turkish imams and Turkish language teachers in public schools.”

The Erdogan-Macron dispute comes against a backdrop of a broader one between the E.U. and aspiring member Turkey.

Amid simmering tensions, over issues like the eastern Mediterranean and the conflicts in Libya and Syria, the E.U.’s member-states agreed at a recent summit to review Turkey’s conduct in December. They have also threatened to impose sanctions over Erdogan’s oil and gas exploration in waters claimed by E.U. members Greece and Cyprus.

German and Italian leaders are publicly backing Macron in the dispute. E.U. foreign policy chief Josep Borrell called Erdogan’s remarks directed at Macron unacceptable, calling on Turkey to “stop this dangerous spiral of confrontation,” and warning that it risked even greater isolation.

Back in France, the French Council of the Muslim Faith (CFCM), a body that liaises between the community and the state, issued a statement on Monday saying that Muslims were “not persecuted” in the country, but were able to practice their religion “freely.”

“We know that the promoters of these [boycott and protest] campaigns say they defend Islam and the Muslims of France. We urge them to be reasonable,” said CFCM head Mohammed Moussaoui. “All the smear campaigns against France are counterproductive and create division.”