Turkey Sentences Another US Consular Employee Accused of Links to ‘Terrorists’ 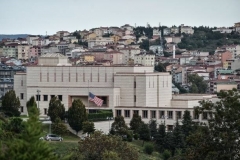 The U.S. Consulate in Istanbul, Turkey. (Photo by Ozan Kose/AFP via Getty Images)

(CNSNews.com) – A Turkish court has sentenced to prison yet another U.S. consular employee accused of links to “terrorists,” threatening to worsen strains in the relationship between the purported NATO allies.

Erdogan reacted to the abortive coup with mass detentions and purges affecting tens of thousands of judges, soldiers, teachers and others, as Turks – and some foreigners – accused by the state of support for Gulen were swept up. Among the latter was American evangelical pastor Andrew Brunson, who was held by the Turks for two years to the ire of the Trump administration, tried on terror and spying charges, but finally released and returned home in October 2018.

Canturk denied being a supporter of Gulen or his social and educational movement, which the Turkish authorities have dubbed the Fethullah Gulen Terrorist Organization (FETO).

“Upon my manager’s orders, I met people I was asked to meet as part of my job,” the Hurriyet daily quoted him as telling the court. “The people in these positions are civil servants appointed by the government. It is not possible for me to know if these people were involved in a crime.”

Canturk, who was placed under house arrest in January 2018 until released 17 months later, has not yet been taken into custody, pending an appeal. His wife and daughter, also put on trial with him, were acquitted for insufficient evidence.

He is the third U.S. consular employee in Turkey to be convicted.

Hamza Ulucay, a long-serving translator at the U.S. Consulate in the southern city of Adana, was sentenced early last year to four-and-a-half years in prison on charges linked to another outlawed organization, the Kurdistan Workers’ Party (PKK), although the court then released him due to time already served since his February 2017 detention.

Metin Topuz, a U.S. Drug Enforcement Administration translator at the consulate in Istanbul, was detained in October 2017, and sentenced last June to nearly nine years in jail for aiding the Gulen network. Secretary of State Mike Pompeo called the charges against him “baseless,” and said that Topuz had “worked tirelessly to promote law enforcement cooperation” between the two countries for nearly three decades.”

He warned that the conviction “undermines confidence in Turkey’s institutions and the critical trust at the foundation of Turkish-American relations.”

Meanwhile Serkan Golge, a Turkish-American physicist at NASA, was arrested while visiting Turkey in mid-2016. In early 2018 February he was convicted of being a member of Gulen’s movement – “without credible evidence,” according to the U.S. Embassy.

He was sentenced to seven-and-a-half years’ imprisonment, reduced to five years on appeal. Turkey released him 15 months later, and Golge was finally able to return to his wife and two young sons in Texas in June of this year.

Ankara has unsuccessful sought to extradite Gulen since 2013, accusing him of trying to overthrow the Turkish state by infiltrating supporters into the judiciary, military and other organs. The demands became increasingly strident after the coup attempt in 2016, and Erdogan had raised the issue with President Trump on more than one occasion – as he did with former Vice President Joe Biden during the Obama administration.

Ties between Turkey and the U.S. have been strained over a number of issues, including Erdogan’s decision to buy the Russian S-400 air defense system in defiance of U.S. opposition, and his military offensive against U.S.-backed Kurdish rebels in Syria a year ago.