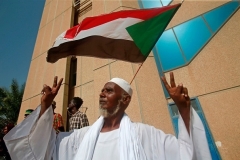 A Sudanese protester waves his country’s national flag during a demonstration in Khartoum against the Islamist former dictator Omar al-Bashir a year ago. (Photo by Ashraf Shazly/AFP via Getty Images)

(CNSNews.com) – Another foreign policy achievement weeks before the election?  President Trump tweeted Monday that the U.S. will remove Sudan from its list of state-sponsors of terrorism, once Khartoum pays $335 million as agreed to U.S. terror victims. As a kicker, Sudan may then become the third Arab country in two months to normalize relations with Israel.

The news of the first part of that reported deal came in the form of tweet from the president:  “New government of Sudan, which is making great progress, agreed to pay $335 MILLION to U.S. terror victims and families. Once deposited, I will lift Sudan from the State Sponsors of Terrorism list. At long last, JUSTICE for the American people and BIG step for Sudan!”

Trump did not refer to the Israel-related element of the agreement, but it was reported in Sudan last week that the administration had given the post-revolution government a 24-hour ultimatum to accept recognition of Israel if it wants the terror delisting to go ahead.

Secretary of State Mike Pompeo visited Bahrain, Sudan and Oman shortly after the United Arab Emirates (UAE) decision to recognize Israel was announced on August 13, prompting speculation it would not be the first. Bahrain duly agreed to normalize ties with the Jewish state, and Sudan looks set to be next.

If that materializes, it would be another example of the type of unorthodox deal-making, which last month delivered Israel another Muslim-majority diplomatic partner, Kosovo, as part of a broader U.S.-brokered economic normalization agreement between Kosovo and Serbia. (As a bonus, both Balkan countries also reportedly agreed to locate their embassies in Jerusalem, rather than Tel Aviv.)

Promoting peace between Israel and its Arab and Islamic neighbors is a key pillar of the adminstration’s approach to the Israeli-Arab conflict, and a break from the mindset that viewed an agreement with the Palestinians as an essential condition for any regional progress.

A Sudan-Israel peace agreement would be significant since the two are still formally at war. Unlike the UAE and Bahrain, Sudan sent troops to fight alongside other Arabs against Israel in the 1948 war of independence and the 1967 Six Day War. (In the 1973 Yom Kippur War, Sudan sent an infantry brigade but it arrived too late to take part in the 19-day conflict that began when Egypt launched a surprise attack against Israel on the holiest day of the Jewish calendar.)

For Sudan, the agreement to lift the terror-sponsor designation would mean it could rejoin the global financial system and be eligible for loans from international lenders, aiding further transformation in the country where Islamist dictator Omar al-Bashir was overthrown in 2019.

Responding to Trump’s tweet, Sudanese Prime Minister Abdalla Hamdok tweeted, “Thank you so much, President Trump! We very much look forward to your official notification to Congress rescinding the designation of Sudan as a state-sponsor of terrorism, which has cost Sudan too much. This Tweet and that notification are the strongest support to Sudan’s transition to democracy and to the Sudanese people.”

“As we’re about to get rid of the heaviest legacy of Sudan’s previous, defunct regime, I should reiterate that we are peace-loving people and have never supported terrorism,” Hamdok added.

“The Sudanese people have been eagerly waiting for this moment following a peaceful mass movement that ousted the brutal Bashir regime,” said Dr. Suliman Baldo, senior advisor at The Sentry – an investigative and policy team focused on African war crimes and war profiteers.

“The Sudanese people have equally suffered from the deposed regime’s violent extremist actions that landed their nation on the U.S. terror list,” Baldo said. “A democratic Sudan could be a bulwark of international peace and security in the region, and today the United States has taken a step toward being an ally of the Sudanese people’s efforts toward that future.”

During his nearly three decades at the helm, Bashir was notorious not just for massive human rights abuses in Darfur, slavery, and a long and bloody civil war with the south, but also for his collaboration with terrorists, including Osama bin Laden, to whom he gave safe haven in the 1990s – prompting the U.S. terror-sponsor designation in 1993.

Two years after bin Laden moved from Sudan to Taliban-controlled Afghanistan, his al-Qaeda terrorist network – in a plot planned on Sudanese soil – bombed the U.S. Embassies in Nairobi, Kenya and Dar-es-Salaam, Tanzania in August 1998, killing 224 people, including 12 Americans, and injuring more than 4,000 more.

Then in October 2000, 17 U.S. sailors were killed in another attack planned and carried out during the Bashir era, the bombing of the destroyer USS Cole in the Yemeni port of Aden. In 2007, a U.S. federal court found that Sudan’s support for al-Qaeda during the 1990s had enabled the terror network to carry out the attack.

Last February, Sudan’s transitional government agreed to pay $70 million in damages to the families of the USS Cole sailors, and in May, a U.S. Supreme Court ruling paved the way for victims of the embassy bombings to pursue billions of dollars in punitive damages against Khartoum.

Most of the terrorists implicated in the embassy bombings have been brought to justice – four are serving life prison terms in the U.S. after being convicted in 2001 – or killed (Bin Laden, his second-in-command Mohammed Atef, and three other men, killed by U.S. or Somali forces in East Africa between 2007 and 2011.)

Two remaining key suspects remain at large, both evidently being sheltered by the Iranian regime. The U.S. is offering $10 million rewards for information on the two, Egyptian nationals Abdullah Ahmed Abdullah and Saif al-Adl, who were indicted by a federal grand jury in 1998 for their involvement in the bombings.

The lifting of Sudan’s designation would leave just Iran, North Korea, and Syria’s Assad regime on the list of terror-sponsors.