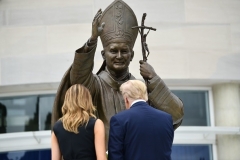 (CNSNews.com) – An executive order signed by President Trump with little fanfare on Tuesday encourages the use of “economic tools” to respond to violations of religious freedom around the world, with possible options including sanctions, U.S. visa restrictions, and “realigning foreign assistance.”

Countries that could be affected by such steps range from adversaries such as China, Iran, Russia, and North Korea, to purported allies with poor religious freedom records, like Pakistan and Saudi Arabia.

Trump did not hold a signing ceremony or make a statement, but Vice President Mike Pence posted a photo on his Twitter feed.

“Proud to stand with President @realDonaldTrump today as he continued to take decisive action to promote Religious Freedom around the world,” Pence tweeted. “We will always stand for the First Freedom, the freedom of religion of every person of every faith.”

Programs to benefit from the funding include those aimed at preventing and responding to attacks on individuals or groups on the basis of religion; promoting accountability for perpetrators; providing legal protections; improving security for houses of worship; and protecting religious communities’ cultural heritage.

The order directs the secretary of state to advocate for international religious freedom (IRF) in bilateral and multilateral forums; lays out requirements for IRF training for foreign service officers; and directs the heads of U.S. agencies, when meeting foreign counterparts, to raise concerns, including specific cases of individuals imprisoned because of their religion.

--Countries placed on a second-tier “special watch list” for less serious but nonetheless troubling behavior. Those now on the list are Comoros, Cuba, Nicaragua, Nigeria, Russia, Uzbekistan, and Sudan.

--Any other countries identified in the State Department’s annual IRF report as having “engaged in or tolerated violations of religious freedom.”

‘A national security imperative and a foreign policy priority’

The order tasks federal officials to “develop recommendations to prioritize the appropriate use of economic tools” to advance religious freedom in countries falling within those four categories.

Among potential “economic tools,” it authorizes the Treasury Secretary to consider imposing sanctions pursuant to the Global Magnitsky Act, a 2016 law that provides for punitive measures against human rights abusers and corrupt actors.

Global Magnitsky sanctions target foreign individuals, rather than governments. IRFA, the 1998 statute that created the architecture for promoting IRF in U.S. foreign policy, already provides for the imposition of sanctions against CPCs, among other measures designed to encourage improvements.

However, since the law was enacted administrations have largely sidestepped the sanctions option, either by invoking “national interest” waivers (in cases like Saudi Arabia, Pakistan, and Tajikistan), or through so-called “double-hatted” sanctions, whereby countries that are already sanctioned for other reasons (such as Burma, Iran, North Korea and China), are deemed also to be sanctioned for their CPC status.

Other tools referred to in the new executive order include the option of denying U.S. visas to foreign officials responsible for violations, and the option of “realigning foreign assistance to better reflect country circumstances.”

The order does not elaborate on the issue, but among countries that fall within the four categories above and have also been major recipients of U.S. foreign aid are Pakistan, Afghanistan, Iraq, and Nigeria.

The U.S. Commission on International Religious Freedom (USCIRF), an independent watchdog created by IRFA to advise the executive and legislative branches, welcomed the executive order.

“We applaud President Trump for continuing to prioritize international religious freedom as a national security imperative and a foreign policy priority,” said USCIRF chairman Tony Perkins, a Republican and president of the Family Research Council.

The commission’s Democratic vice-chair, Gayle Manchin, welcomed in particular the order’s “reference to U.S. officials working for the release of religious prisoners of conscience, which is a high priority for USCIRF.”

“USCIRF has long called on the U.S. government to develop an overall strategy for promoting religious freedom abroad, as well as country-specific action plans,” she said, “and we welcome the fact that this executive order requires the State Department and USAID to do exactly that.”