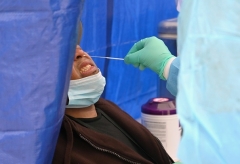 A healthcare worker in New York City takes a nasal swab sample to test for the coronavirus. (Photo by Angela Weiss/AFP via Getty Images)

(CNSNews.com) – President Trump was derided on Twitter Thursday for saying that the high number of confirmed coronavirus cases in the United States was related to the significant increase in testing. But the data suggest that he is right.

Visiting a medical equipment distributor in Pennsylvania, Trump announced that the number of tests for the coronavirus causing COVID-19 had passed the ten million mark as of Wednesday afternoon.

“And don’t forget,” he said, “We have more cases than anybody in the world. But why? Because we do more testing. When you test, you have a case. When you test, you find something is wrong with people. If we didn’t do any testing, we would have very few cases.”

In saying, “If we didn’t do any testing, we would have very few cases,” Trump clearly meant that if testing was not being carried out, then many cases would be going unconfirmed and unreported – not that they would not exist.

By the same token, in saying, “When you test, you have a case,” he self-evidently did not mean that the testing causes the case.

But, critics decided that Trump meant that if testing wasn’t being carried out, then people would not be getting sick.

Jennifer Mercieca, who teaches in the Department of Communication at Texas A&M University, tweeted of Trump’s claim, “Trump claims the test causes the ‘case,’ but it doesn’t. The test does not cause the case, the test _detects_ the case that pre-exists the test. The virus causes the case. In other words: this is nonsense.”

(Trump did not say that the test causes the case.)

In the current pandemic, national case-fatality statistics are not viewed as a particularly useful measure. That’s because while the number of deaths is a generally (although not entirely) reliable data set, the number of confirmed cases reported depends largely on the amount of testing being carried out in a particular country, as well as the accuracy of the reporting.

The Our World in Data project, which is compiling COVID-19 testing figures, explains the correlation:

“No country knows the total number of people infected with COVID-19. All we know is the infection status of those who have been tested. All those who have a lab-confirmed infection are counted as confirmed cases,” it says.

“This means that the counts of confirmed cases depend on how much a country actually tests. Without testing there is no data.”

In the United States, after a slow start, coronavirus testing picked up in early March. By the tenth of that month, a total of 10,000 had been carried out, according to figures compiled by the COVID Tracking Project.

By March 20, the number of tests carried out had climbed to more than 163,000, and by March 30 it had jumped significantly, passing the one million mark.