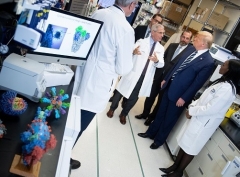 (CNSNews.com) – Asked Monday about reports that Chinese state hackers are trying to steal U.S. research into coronavirus vaccines and treatments, President Trump, with barely-concealed contempt, asked, “What else is new?” before again criticizing the Chinese Communist Party’s handling of the deadly outbreak.

“What else is new, with China?” Trump asked in response to the question by Reuters journalist Steve Holland during a press conference in the White House Rose Garden. “What else is new? Tell me.”

“I’m not happy with China,” he continued.

The New York Times reported at the weekend that the FBI and Department of Homeland Security (DHS) were preparing to issue a public warning that China’s “hackers and spies are working to steal American research” relating to a vaccine and treatments for the coronavirus that causes COVID-19.

The report said a draft of the warning stated that China was seeking “valuable intellectual property and public health data through illicit means related to vaccines, treatments and testing.”

Beijing reacted derisively to the claim, contending that China leads the world in vaccine research and development – with the implication that it therefore has no need to steal others’ secrets. (“China leads vaccine R&D, no need to steal,” reads a headline in the CCP organ, People’s Daily.)

“China is a staunch upholder of cyber security and a victim of cyber-attacks. We firmly oppose and fight all kinds of cyber-attacks conducted by hackers,” foreign ministry spokesman Zhao Lijian told a press briefing.

“We are leading the world in COVID-19 treatment and vaccine research,” he added. “It is immoral to target China with rumors and slanders in the absence of any evidence.”

(Zhao is the ministry spokesman who in tweets last March promoted a conspiracy theory accusing the U.S. Army of introducing the coronavirus to Wuhan in the fall of 2019.)

China is fully able to research and develop COVID-19 vaccines independently, it cited the academic, Lü Xiang, as saying.

“[A]ctors may seek to obtain intelligence on national and international healthcare policy, or acquire sensitive data on COVID-19-related research,” it said.

That alert did not identify the perpetrators, but called them “advanced persistent threat (APT) groups,” a term used in the cybersecurity industry for sophisticated hacking threats linked to leading suspects like China, Russia and Iran.

In a follow-up question at the White House press conference, Holland asked about Chinese media reports saying that Beijing would like to reopen negotiations on the U.S.-China trade deal, to get more beneficial terms for China.

“Is this something that you’d be interested in doing?” he asked the president.

Trump said he had heard too that China wants to reopen the trade talks, “to make it a better deal for them.” He then repeated his criticism of predecessors’ handling of the trade relationship with China.

“China’s been taking advantage of the United States for many, many years, for decades, because we had people at this position right here where I’m standing, sitting right in that office, the Oval Office, that allowed that to happen,” he charged.

“No, I’m not interested in that,” Trump added. “Let’s see if they live up to the deal that they signed.”

Global Times attributed the impetus on China’s side to reopen trade talks to what it called “a tsunami of anger among Chinese trade insiders” over U.S. attacks on China over its handling of the coronavirus outbreak, which began in Wuhan late last year.

The “phase one” deal, signed in Washington last January, suspended and reduced some U.S. tariffs on China but left in place for the meantime tariffs on some $250 billion in Chinese imports.

In exchange, China pledged to buy more U.S. goods and services, worth at least $200 billion, over the next two years. Beijing also agreed to address some U.S. intellectual property concerns.